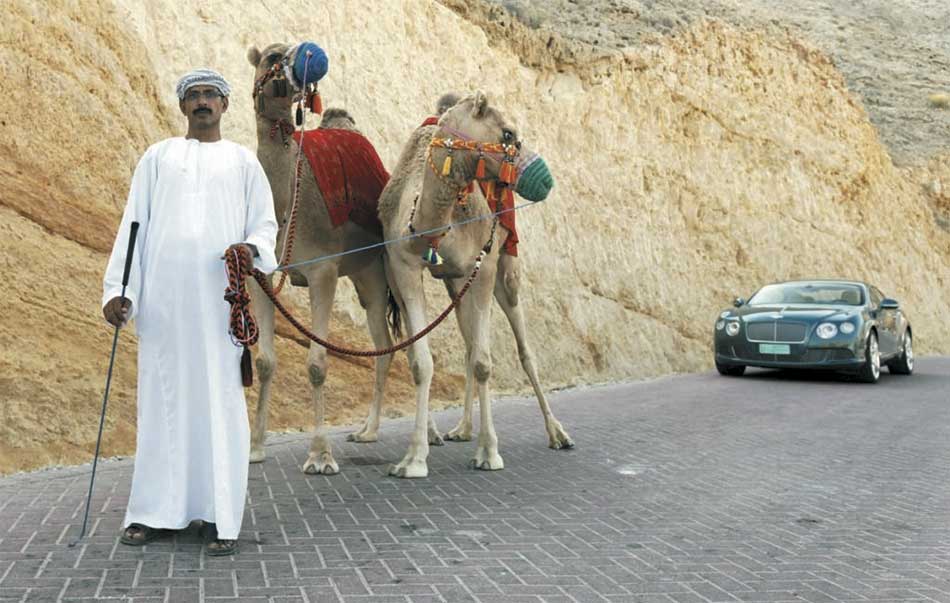 Note: The following is a report on the new-for-2011 Bentley Continental GT, which was unveiled to a contingent of international auto journalists in Muscat, Oman in November 2010.

Sultan Qaboos bin Said has been the power on the throne in Oman for the past 40 years. During his rule, the Sultanate has evolved into a thriving country that appears blessed with peace and tranquility. And with nearly one million barrels of crude oil per day being pumped from beneath the Sultan’s royal slippers, there’s evidence of prosperity nearly everywhere you look.

In an oddly comparative way, Bentley has also undergone a major transformation. Under Volkswagen’s ownership since 1998, the Crewe, England-based automaker has evolved from producing small batches of expensive high-powered coaches into a constructor of somewhat mass-produced luxury conveyances. 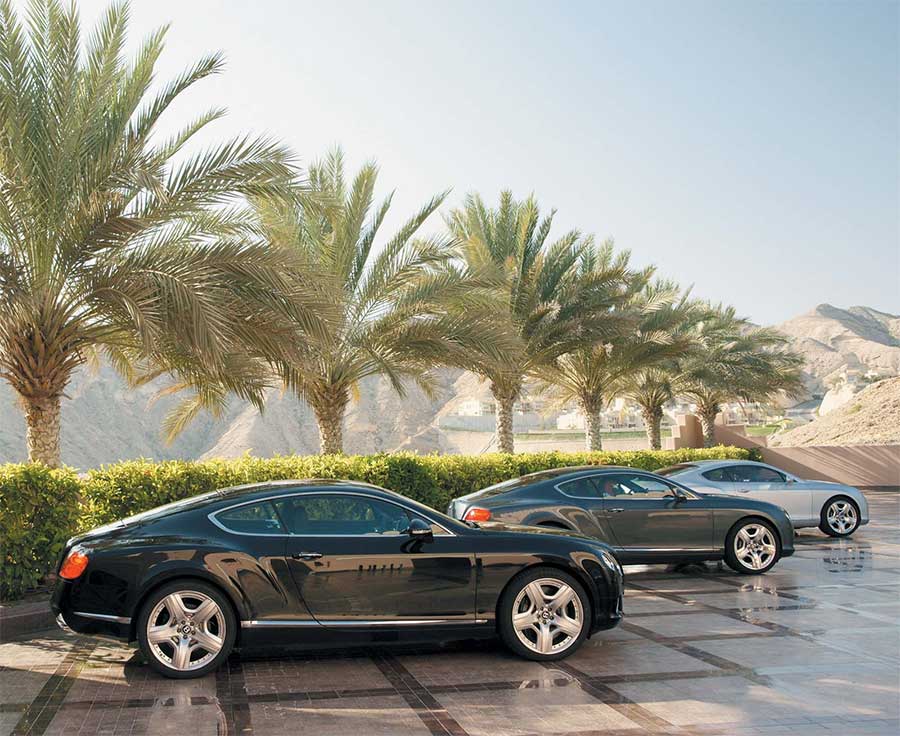 Leading this renaissance is the Continental GT, a four-seat, all-wheel-drive coupe that arrived for the 2004 model year. Since then, Bentley has sold more than 28,000 around the world, making it by far the most successful model built since Walter Owen Bentley founded the company in 1919. Commenting on the company’s previous money-losing history, Bentley engineering head Ulrich Eichhorn says, “The Continental GT saved Bentley”. 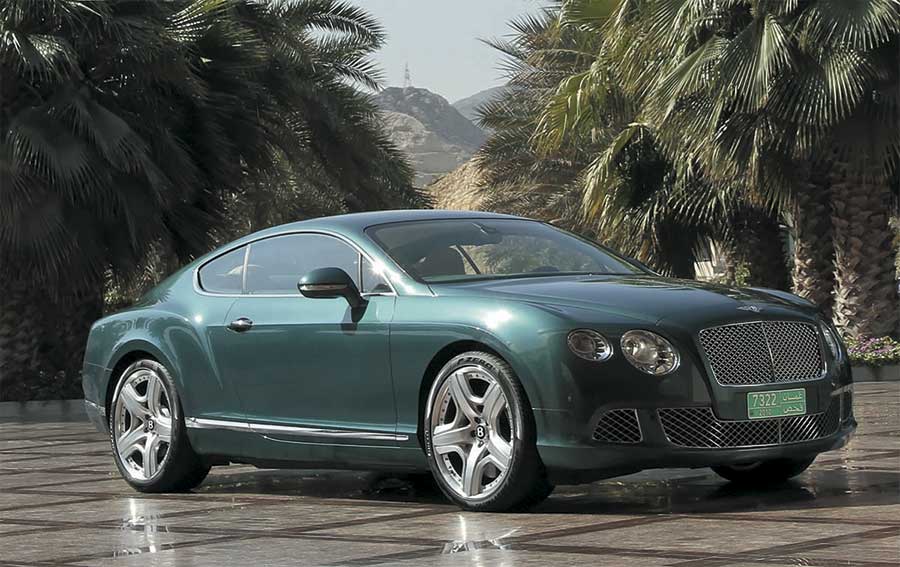 The GT’s signature chromed mesh grille sits slightly more upright and the restyled headlamps are now ringed by small Light Emitting Diode (LED) daytime running lights. At the opposite end, the LED taillights blend smoothly into the haunches and the twin oval tailpipes have been widened to emphasize the coupe’s slightly wider stance.

Opening the wide doors leads to a leather lover’s paradise. Fully 80 per cent of the cabin is covered in soft-touch hides for the seats and door panels plus a more grainy finish for the steering wheel and dashboard. Every expertly stitched, perfectly matched square inch of bovine epidermis is a delight to sit in and around.

What isn’t coated in leather is covered in wood veneers. Walnut is the standard application, but six other finishes are offered.

The newly contoured front seats each feature dual scallops in back that add more than five extra centimetres of much needed knee room, making the rear buckets nearly as comfortable as the fronts.

At idle, virtually no sounds invade the GT’s cabin. There’s nothing to indicate that the Volkswagen-based 6.0-litre twin-turbocharged 12-cylinder engine that wields 567 horsepower (up 15 from the previous GT) has even been switched on.

The quiet continues under light throttle, while an angry growl ensues with an aggressive stab of the pedal. The turbochargers help launch 516 pound-feet of torque, almost instantly, without any herky-jerky drama as all four wheels dig in to shove the 2,300-kilogram GT up to speed. The front-to-rear power allocation is set at 40:60 for normal driving conditions, but the AWD system will immediately adjust that ratio if either the front or rear traction becomes compromised.

A newly developed paddle-shifted six-speed automatic transmission reduces the shift interval to 200 milliseconds from 400. According to Bentley, this feature helps the GT accelerate to 60 mph (96 km/h) in a company-touted 4.4 seconds and to 100 mph (160 km) from a standing start in just 10.2 seconds.

Those numbers couldn’t be verified here, but after zipping along Oman’s principal freeway and two-lane secondary roads, words such as blistering, effortless and intoxicating seem to add the appropriate dimension of subjectiveness to simple numeric values.

Along with delivering wide, thrust-induced grins, the GT can hustle through tight corners as if being magnetically held to the pavement, which is certainly surprising given the car’s heft and physical size. 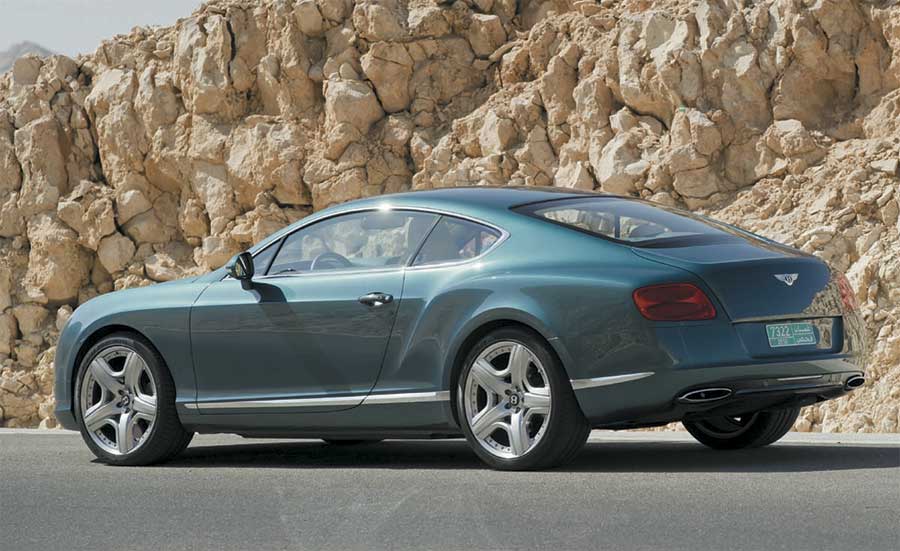 Driving the Bentley at extra-legal speeds in Oman isn’t a huge problem. The locals are generally courteous and prone to flashing their lights as a show of approval and not to warn of an impending speed trap, as is the case in North America. However, happening upon a three-car rear-ender supported an earlier advisory from Bentley that Omani drivers are prone to stopping suddenly for no apparent reason. Also problematic are the wild goats and camels that tend to wander onto the highways. Both issues curbed any attempts at verifying the GT’s specified 320 km/h top speed.

Two days of grand touring in this extraordinary land in the equally extraordinary GT is an awe-inspiring adventure. If one were blessed with $240,000 to spend on personal transportation, the Bentley GT’s absolute luxury and take-no-prisoners performance would easily match any driving enthusiast’s penchant for the automotive good life. It’s a formula for Bentley’s progress, in a country that appreciates it.