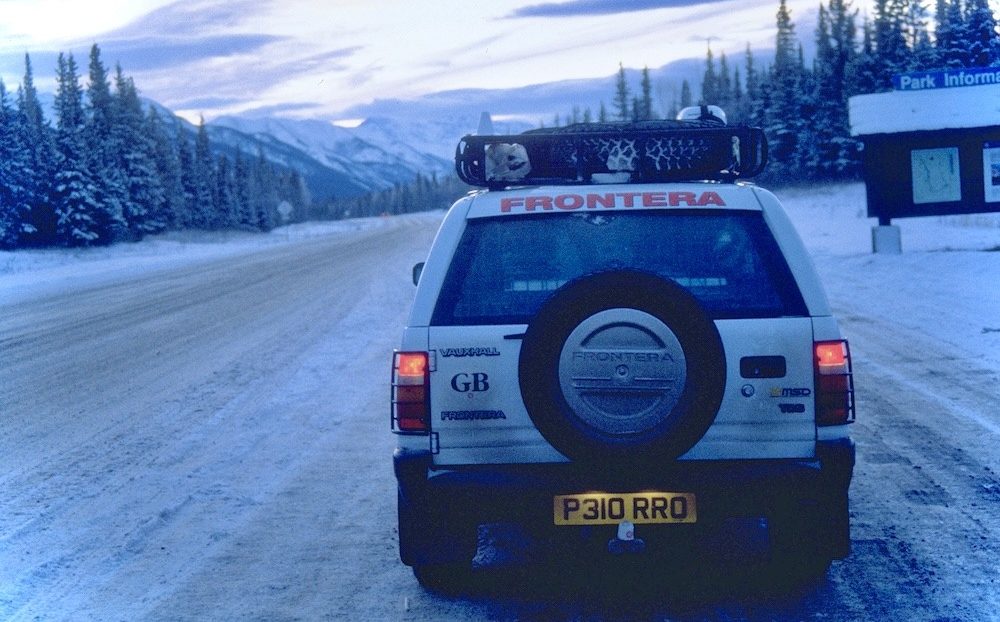 Barbie gets us around the world and home for Christmas

In December 1997, Garry awoke foggy-headed in the luxurious Flitwick Manor, the most haunted hotel in England, the day after completing an around-the-world record drive.

“Flitwick Manor! It’s the most haunted hotel in England. People run screaming from there at all hours of the night!” I distinctly remembered those words of warning as the first hints of dawn filtered through the lace curtains.

Something was different though.

For starters, there was no crick in my neck, no perpetual rocking and I could stretch my legs out. I didn’t have boots on and there was no engine drone. All I could hear was the cackling of blackbirds drifting in the open window and the faint sound of a piano playing a Chopin prélude. The smell of clean sheets and the softness of a feather pillow enhanced my confusion.

“Would you like coffee and toast now?” The voice was muffled, but polite and sweet as she tapped on the door. Not the usual, “It’s yer turn. Fuel is at half, not much traffic but lots of caribou. Road’s icy in places.”

Then again the sweet voice, “Mr. Sowerby, your coffee.”

I was foggy-headed that December morning in 1997, but it soon hit me and I laughed out loud. It was over. The day before, Graham McGaw, Colin Bryant and I had finished driving around-the-world.

We had logged in at the zero degree Meridian Line in Greenwich, England with a record time of 21 days 2 hours and 14 minutes, even faster than my deep-down goal of 23 days. We were delighted with ourselves and the Vauxhall Frontera sport utility truck that had carried us through the 29,000-kilometre ordeal.

To top it off, I would soon be hopping a plane to Canada for Christmas.

For a while, Christmas at home with my family had seemed unlikely when our Vauxhall Frontera had gone missing during the air freight sector from Auckland, New Zealand to Anchorage, Alaska.

Colin, Graham and I had flown ahead on a commercial airliner to make arrangements for the North American leg of the trip.

On the day the Frontera was scheduled to arrive, my partners and I dutifully went to the Polar Air cargo terminal at the Anchorage airport to clear the truck through Customs. I noted the registration on the tail of the white Boeing 747 air freighter sitting on the tarmac was the same as the aircraft on which I had put the vehicle three days earlier in Auckland.

But, after watching dozens of cargo pallets come off the aircraft, the cargo doors closed and the lumbering jumbo jet taxied to the runway and took off for New York. No Frontera.

My partners were ready to mutiny and hop the first flight back to their homes in England.

The cargo agent later explained the Frontera had been bumped for another shipment and was presently in a storage hangar at the airport in Taipei, Taiwan of all places. This was not good news. The weather was closing in, Christmas was just around the corner and we still had another 9 days of driving, including an airlift from New York to Madrid, before finishing up in London.

Back at the hotel in Anchorage, I tried to determine a course of action that would get us home for Christmas and pacify my restless teammates.

I called the cargo manager and asked who was in charge of their operation in the Far East. He provided a cellular phone number for their Vice President who I reached stuck in a traffic jam in Hong Kong. He listened to our problem and promised to call back shortly.

“My apologies, but your truck got delayed by a priority shipment of cargo destined for New York. It will arrive Alaska in two or three days.”

He sounded sincere, but our Christmas, along with the logistical and public relations plans for the expedition, was on shaky ground.

I hung up the telephone, depressed. Looking for something positive I soon realized that the nature of the priority cargo that had overrode our truck could make the difference. What if it was toys? Toys for Christmas!

I called the Vice President, who was still gridlocked in Hong Kong.

“What was in that cargo shipment that out-ranked our Frontera?” I asked optimistically.

“Ohhhh. Those new anatomically-correct Barbie Dolls. They’re selling like crazy in the U.S. and all the stores are short!” He managed a half laugh.

Luck was with us. I wrote a press release titled Barbie Bumps Around-the-World Record Drivers and sent it off to the British public relations firm that had worked itself into a state over the Frontera-in-Taipei-predicament.

The British tabloids had a ball with the story. Polar Air managed to re-route the Frontera to Alaska through Australia and get us back on track for the rest of the record attempt, putting us in London two days ahead of our projections. Barbie had saved the day and I would make it home for Christmas.

But what about the sweet voice out in the hall at the haunted Flitwick Manor? The coffee? The toast?

I slipped out from under the goose-down duvet and wobbled to the door. Out in the hall lay a tray with a steaming pot of coffee, toast, homemade jam, a silk napkin.

No one was about. Only the sound of someone on the ivories playing Chopin. Somewhere down the hall. Barbie perhaps.