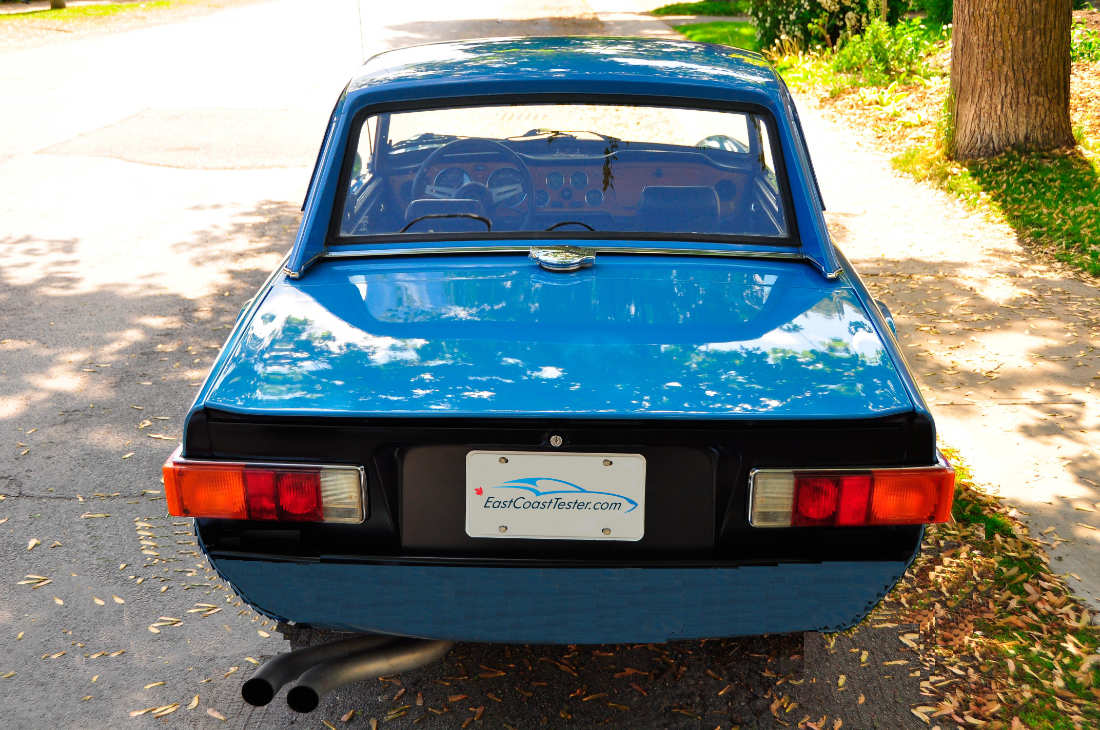 A drive down memory lane: The Triumph TR6

“I don’t know how the car can stand up to that kind of serious abuse,” I would often say to myself.

The vehicle in question was a 1971 Triumph TR6 sports car, which was a graduation present that my friend Gord bought for himself. Fresh out of University and a full-fledged architect, Gord had replaced his long-since rusted out TR3, the one with the tiny doors and ill-fitting side-curtain windows, for this latest creation from the British Leyland conglomerate.

Gord loved cars, but knew nothing and cared even less about their inner workings. He simply enjoyed flogging the heck out of them at every opportunity. His latest prize was no exception. His favourite attention-getting tactic was to cruise around town with the top down, wearing a rooster-shaped cap he had acquired from some frat house halloween party.

The effect was startling, if not a bit disturbing, but Gord, a full-blown eccentric, cared little about what others thought. He was having a good time, and got a kick out of the ‘Chicken Man’ title his friends bestowed upon him.

Fortunately, the sturdy new TR6 was up to Gord’s heavy-handed driving style, at least for the first few years of ownership. 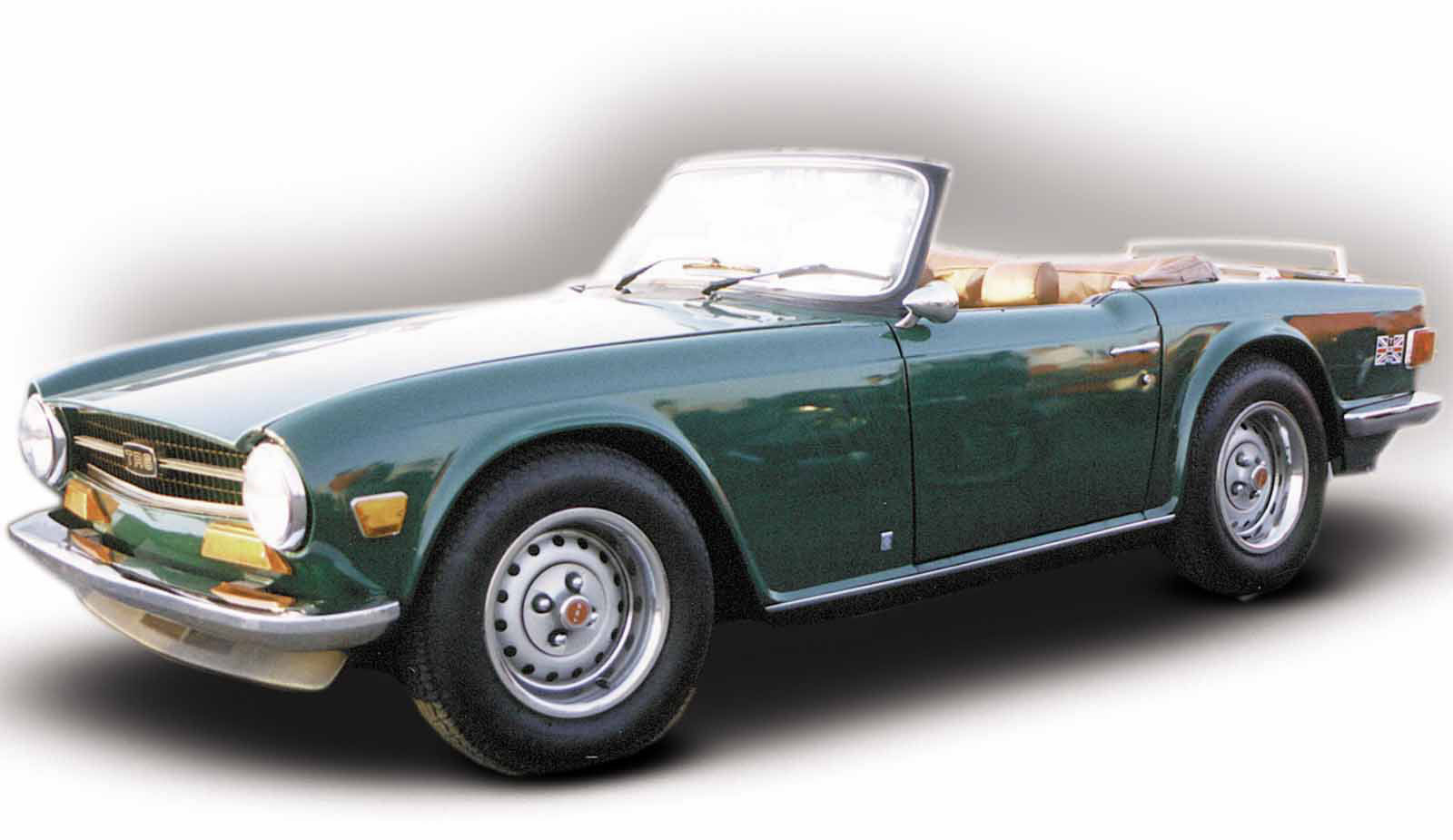 The TR6 was first launched in 1969 to rave reviews.

It had been preceded by the short-lived TR5 and TR250 models that introduced six-cylinder power to the TR-series for the first time.

The TR6’s inline 2.5-litre engine was basically a carry-over from the TR250, as were most of its mechanical bits. However the bodywork had been restyled by Karmann, the same company that had designed the Volkswagen Karmann Ghia and built the Beetle convertible.

The major cosmetic changes consisted of moving the headlights out to the edge of each fender, and creating a chopped-off, or ‘Kamm-style’ rear end. The result was a whole new lean and mean image for the Triumph, which proved popular with buyers, particularly in North America where 90 percent of the TR6’s 94,619 total production were shipped (including every car manufactured after 1974).

Less popular with buyers, though, was the loss of power that resulted from the new emission controls that became mandatory on all new vehicles beginning in the late 1960s.

To meet these anti-pollution requirements, Triumph was forced to replaced the TR6’s export model’s fuel-injection system with a pair of Stromberg side-draft carburetors.

The result was an output of slightly more than 100 horsepower, which was a significant reduction compared to the home market’s 152-horsepower rating. Performance also suffered, with a 10-second-plus zero-to-60-mph (96 km/h) time, nearly two seconds slower than the proper British fuel-injected version.

Despite this power shortage, the TR6 was still considered a lively performer and its low centre of gravity, four-wheel independent suspension and front disc brakes resulted in the car earning high marks in the fun-to-drive department.

The cockpit was also a comfortable and cosy spot with plenty of leg, shoulder and elbow room for two.

But the real magic began when the engine was turned on.

The four-speed gearbox was snicked into first gear and the relatively heavy clutch pedal was returned to the rest position. The burbling exhaust note emanating from the TR6 was sweet music to both passengers and passers-by.

On the down side, the TR6’s minimal rear suspension travel resulted in much bottoming-out over rough or even moderately uneven pavement, transmitting a jarring thud through the driver’s lower back.

Also, the folding soft top (a removable fibreglass hard top was optional), although easier to erect than that of the MGB, still fell short of the class-leading Fiat 124’s one-piece instant up/down lid.

By 1973, British Leyland was forced to add two grotesque chunks of rubber attached to the far end of each of the TR6’s front and rear bumpers in order to satisfy the ever-tightening North American safety regulations. Although they provided a measure of protection from mild trauma, they interrupted — some would say ruined — the car’s otherwise clean and graceful lines.

After a seven-year production run, the last TR6 rolled out of the Canley, England plant in July, 1976. Its replacement, the TR7, was a thoroughly modernized sports car, with unit body construction, aerodynamic styling and trendy pop-up headlights.

The new model was a popular seller, but its buzzy four-cylinder powerplant meant it lacked the heart and soul of the more muscular looking (and sounding) TR6. Somehow, I can’t imagine the hard-charging ‘Chicken Man’ driving anything but.

For a non-chicken related story about a Triumph TR6, click here. WARNING: There may be a racoon involved…

And another fine example of a Triumph TR6 here.