2013 Genesis Coupe wrapped in that Avery Dark Green Pearl is making us feel all warm, fuzzy and Christmas-y

Before we launched this site back in June, we started going to local (distanced) car meets in the month leading up to the launch, meeting people and making friends in the car scene.

Brianna Dupuis was one of the first people we met out there, with her 2013 Genesis Coupe, of course.

Friendly and positive, she’s a well-liked and active member of a vibrant car community here in Nova Scotia.

Right now, she’s giving the frontline workers of Nova Scotia some love by selling ‘thank you’ bumper stickers for $10 each with $2 being donated to the QEII Health Sciences Centre Foundation. Stickers will be ready for pick up around January 7th and you can find Brianna on Instagram @Genmamii.

Finally we get to give her slick 2013 Genesis Coupe some East Coast Tester love.

Brianna, who’s been into cars since she can remember, tells us she has had the racy coupe for about two years. The Genesis Coupe always stood out to her. Since they’re not produced anymore, you don’t see them around much.

Comfort and rear-wheel-drive was what Brianna wanted. She says she got that and so much more.

She’s been having fun with her first project car.

On the four corners, we love the full custom three-piece SS3 Infinitewerks wheels with gloss white face and triple-plated chrome lip. A BC Racing coilover suspension kit with spring rates of 12k on the front and 14k on the rear give the Genesis Coupe better performance, reduced body roll and that sick lowered stance.

Coming at you, the Coupe looks sharp with the AERO BLITZ front splitter. And not so bad driving away either, with the custom 2.5 and 3.5-inch quad pipes out the back and cool Spec-D sequential tail lights. 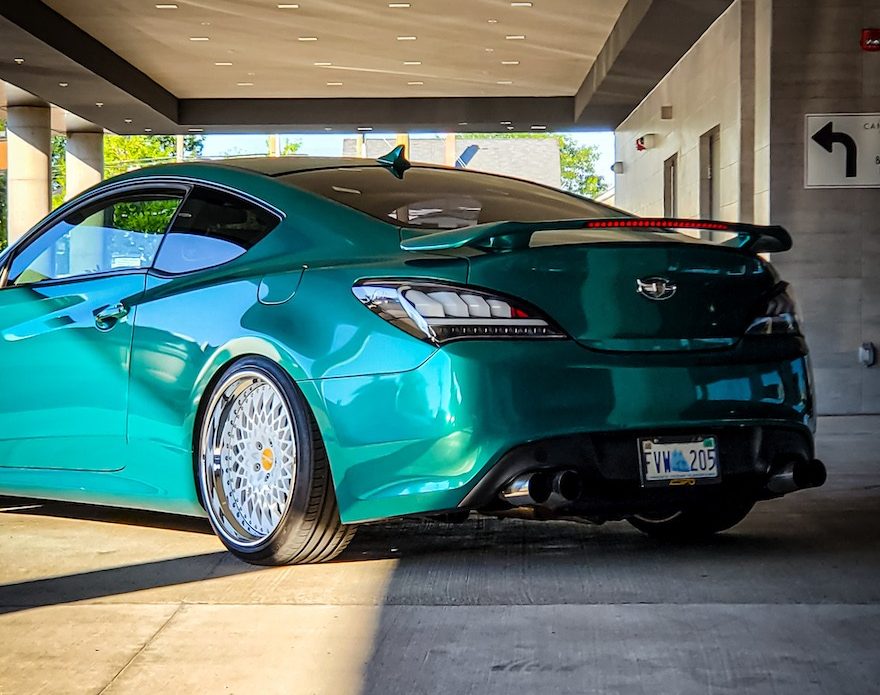 Brianna cranked up the engine power with a short ram-air intake by Injen and an HKS blow-off valve to complement the turbocharger in the 2.0-litre engine.

She doesn’t race the well-loved Genesis though. She usually drives it only on the weekends. And the odd time throughout the week to get groceries, she laughs. At the moment, it’s in hibernation until May.

All round, the 2013 Genesis Coupe, especially with the sweet pearly Avery Dark Green wrap (by YST Auto in Lower Sackville) has a look that is distinctive and stands out from the crowd, which is a testament to the pretty perfect way Brianna Dupuis has modified her special ride.

Looking forward to seeing it (and Brianna) out on the roads of Nova Scotia in the spring!