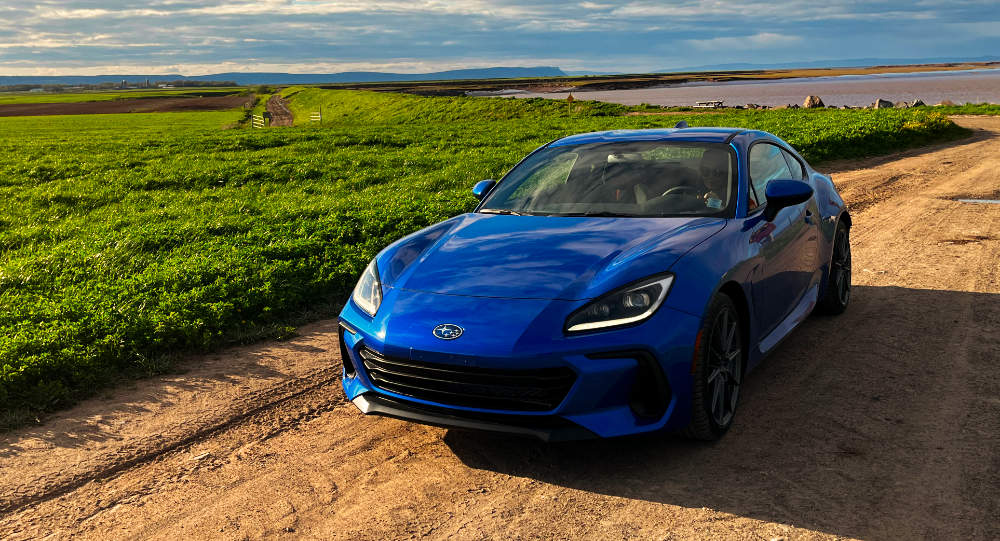 The 2022 Subaru BRZ was developed in conjunction with Toyota, who sell a near-twin GR86. They share a Subaru platform, are powered by a Subaru engine, and are built at Subaru’s Gumma main assembly plant in Japan.

Shortly thereafter it approached Subaru to collaborate on the development of a small, light sports car. A modified version of the Subaru Impreza platform was selected, as was the horizontally opposed Subaru four-cylinder engine, modified to use Toyota’s D-4s direct and port injection system.

Toyota has a similar arrangement with BMW to build its’ other sports car – the bigger, faster, and more expensive Supra, alongside the BMW Z4. Here again, Toyota’s partner provides the chassis and drivetrain.

Production of the Subaru BRZ began in 2012 and was an instant hit with enthusiasts.

An absolute hoot to drive, the harder the better, the BRZ is an affordable, small, light and nimble sports coupe. It is the only Subaru on the market without all-wheel-drive. Instead, it features a handling-biased rear drive setup, complete with a sophisticated double wishbone rear suspension and Torsen limited slip differential.

As enthusiasts are wont to do, they complained about the need for more power. That has been addressed with the second-generation BRZ.

The new engine displaces 2.4 litres compared to the 2.0-litres used previously. It produces 228 horsepower, up from the 200 of the outgoing engine. Both are normally aspirated for instant throttle response.

The new engine also has more torque in the mid-range, where it is most often accessed and appreciated. The new engine chops almost a full second from the time it takes the BRZ to get from rest to 100 km/hr. That feat is now accomplished in less than six seconds.

It can trip the clocks at less that 14 seconds in the quarter mile!

The BRZ could use even more power. That is because the rest of the car could handle more.

But the amount of power and resulting performance are enough to bring a grin to your face. The engine emits a delightful snarl as it approaches the 7,500 redline. The close-ratio six-speed manual gearbox requires little more than a flick of the wrist to change gears. The ratios are well-spaced, and the clutch light and progressive.

The brakes are smooth, powerful and haul the car down from speed repeatedly with no signs of fade. The steering is rifle sharp and provides exceptional feedback.

The suspension has been beautifully tuned to provide near-neutral handling. The grip is prodigious, with the sticky Michelin Pilot Sport 4 performance rubber playing a significant role.

The ride can be a bit abrupt over sharp surface changes, but that is a small price to pay for the chuckability of this little car!

With a very low centre of gravity and all-but-neutral handling, the BRZ begs to be taken to the track, whether a full-fledged race-course, a slalom or similar solo event. There are five settings for the stability and traction control systems. The system can be turned off or the driver can select how much intervention is wanted.

The 2022 model is a little longer, and lower than its predecessor.

Chassis stiffness is up 50%. The engineers specified aluminum for the hold, doors, and fenders to help offset the increased weight brought by the additional safety equipment and features of the new BRZ.

At less than 2,900 lbs. it remains one of the lightest cars on the market.

Inside the tiny cockpit of the 2022 Subaru BRZ

Subaru lists the BRZ as a four-passenger vehicle. But to ask someone to occupy the rear seats would be cruel and unusual punishment. Those rear seats and a useable amount of cargo space beneath the hatch are the only signs of practicality. There is virtually nowhere to put small items other than the glovebox.

The driver faces a 18-cm digital instrument cluster with the tachometer front and centre.

A 20-cm infotainment screen is mounted in the centre of the dash with actual knobs and buttons for critical functions as well the touchscreen. Satellite radio, Apple CarPlay and Android Auto compatibility are standard.

The BRZ comes in base and Sport-Tech trims. The tester was the latter, which added 18-inch aluminum wheels wrapped in performance tires, steering responsive LED headlights, rear and side vehicle detection, and blind-spot monitoring.

The Subaru BRZ is a budget-priced sports car with performance that belies its price. Small, light, and nimble, it has plenty of power.

Click here for Wheel Woman’s woeful tale of deprivation during her time in the 2022 Subaru BRZ.