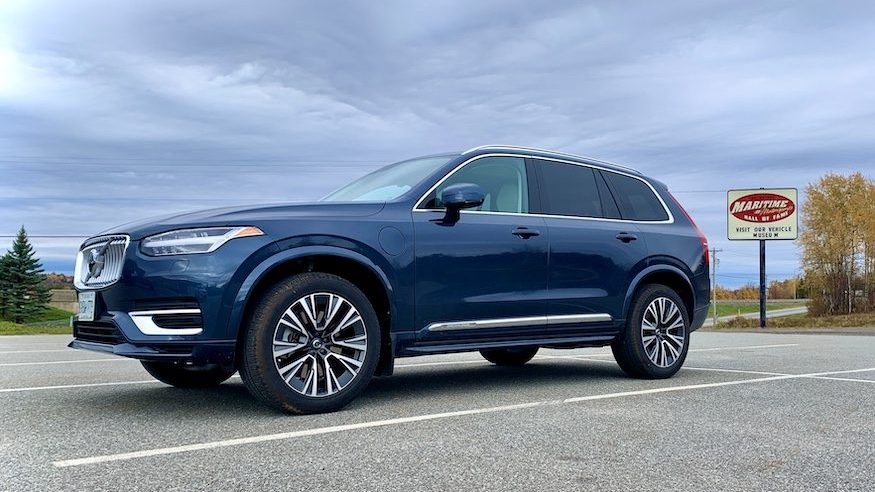 This week, Richard Russell’s soft spot for Volvo is rekindled while at the wheel of a crisp, refined 2021 Volvo XC90 T8.

I picked up the 2021 Volvo X90 tester in the city, late in the day. By the time I started the 150-km drive home, darkness had set in. Holy Cow! What fabulous headlights! I’ve driven thousands of vehicles over the years, at least 100 new ones every year for decades. I have never enjoyed such visibility at night in a motor vehicle.

That was the first and most likely lasting impression of this vehicle.

I have a soft spot for Volvos. My first competitive event was at the wheel of a friend’s Volvo 122. There was the brief period when the company assembled the 144 in Nova Scotia. One of my friend Gary Sowerby’s forays into the Guinness Book of Records came at the wheel of a Volvo. I had a lovely V70 wagon for a period and have toured Volvo’s facilities in Sweden on a number of occasions.

I was disheartened when Ford purchased Volvo in 1999, a fear that deepened when it sold the company to Chinese interests in 2010.

Relief came when I realized the new owners (Zhejiang Geely Holding) were going to take a hands-off approach and allow Volvo to do what it does best – develop and produce stand-out passenger vehicles bristling with safety technology and engineering.

Geely has provided the billions necessary for the development of new vehicles and systems, more than $1.5 billion alone for a new assembly plant in the U.S.

All are current products, developed and produced under Geely ownership. They are produced in Gothenburg (Sweden), Ghent (Belgium), Chengdu and Daqing (China), and Charleston, South Carolina. Engines are manufactured in Skövde (Sweden) and Zhangjiakou (China) and body components in Olofström (Sweden).

Volvo has assembly facilities similar to those it had in Nova Scotia. KD (Knock Down) kits are assembled in India and Malaysia.

Volvo, in every sense, is a global car company!

All this by way of taking a look at the test vehicle – a top-of-the-line XC90 in the cumbersomely-named Inscription Expression trim. This large, three-row crossover showcases the expected Volvo attributes – safety, design, and engineering.

Safety – For Volvo, the company that pioneered the use of seatbelts, safety is at the forefront

The XC90 boasts the usual array of active and passive safety features, to help prevent collisions and protect occupants should one occur.

Volvo pioneered the use of seat belts in passenger vehicles.

I’ve watched as Volvo threw a car unto a ramp in Torslanda, Sweden that caused it to flip and land on its roof at 60 km/hr. When it finally came to a rest a technician calmly walked up and opened all four doors with ease. Just another example of how safe Volvos are.

This car’s Scandinavian roots are evident from the outset – clean, refined and modern. Stylish, yet simple. The 2021 XC90 is clearly and only a Volvo from hundreds of feet away, with neat touches like the ‘Thor’s Hammer’ LED headlights, handsome alloy wheels and sculpted hockey stick taillights.

Inside, the stylish yet simple theme continues with high quality materials like stitched leather, natural wood and real metal accents. The seats, as expected from Volvo are uber comfortable, regardless of your size, shape or desired position.

A stand-out feature is the vertical Sensus centre screen.

Reminiscent of the blocky Volvos of a certain era, the 23-cm iPad-like screen offers tablet-like functionality and access to a wide variety of information and control. The side-swipe function can be distracting while driving. A small rectangular knob on the centre console, serves the start/stop function while a roller-style Drive Mode selector is nearby.

Under the hood of the test vehicle was what Volvo refers to as the T8 Twin Engine. It’s a full hybrid, with a turbo and supercharged 2.0-litre engine producing 303 horsepower, while an electric motor puts 87 more horses in the corral.

That’s a lot of engineering crammed into one relatively small engine. There is nothing small about the result.

Four hundred horsepower and 472 lb. ft. of torque is sufficient to propel this big three-row ute from rest to 100 km/hr in less than six seconds. Passing is a breeze and hills don’t seem to exist. If a turbocharged, supercharged hybrid isn’t enough, you can plug this one in to top up the 10.4-kWh lithium-ion battery.

The all-electric operation may only last for 25 kilometres or so, but that allowed me to witness 5.3 litres/100 km for a short spell – in a large, 5,500-pound vehicle!

For a week and 850 kilometres of mixed highway and city driving, I averaged an impressive 9.1 litres/km. Those numbers are usually reserved for much smaller hybrid vehicles. The hybrid system is well sorted and the transition from gas to gas/electric seamless.

The drivetrain includes all-wheel-drive and an eight-speed automatic transmission.

It can tow up to 2,267 kg. worth of adult toys or utility trailers. The XC90 offers a semi-autonomous system called Pilot Assist which takes over the steering and attempts to keep the vehicle centred between lines on the edge and centre of the road. I found myself fighting with it as it seemed to waver between the two extremes.

The Volvo XC90 is a showcase for state-of-the-art technology and safety wrapped in Scandinavian style.