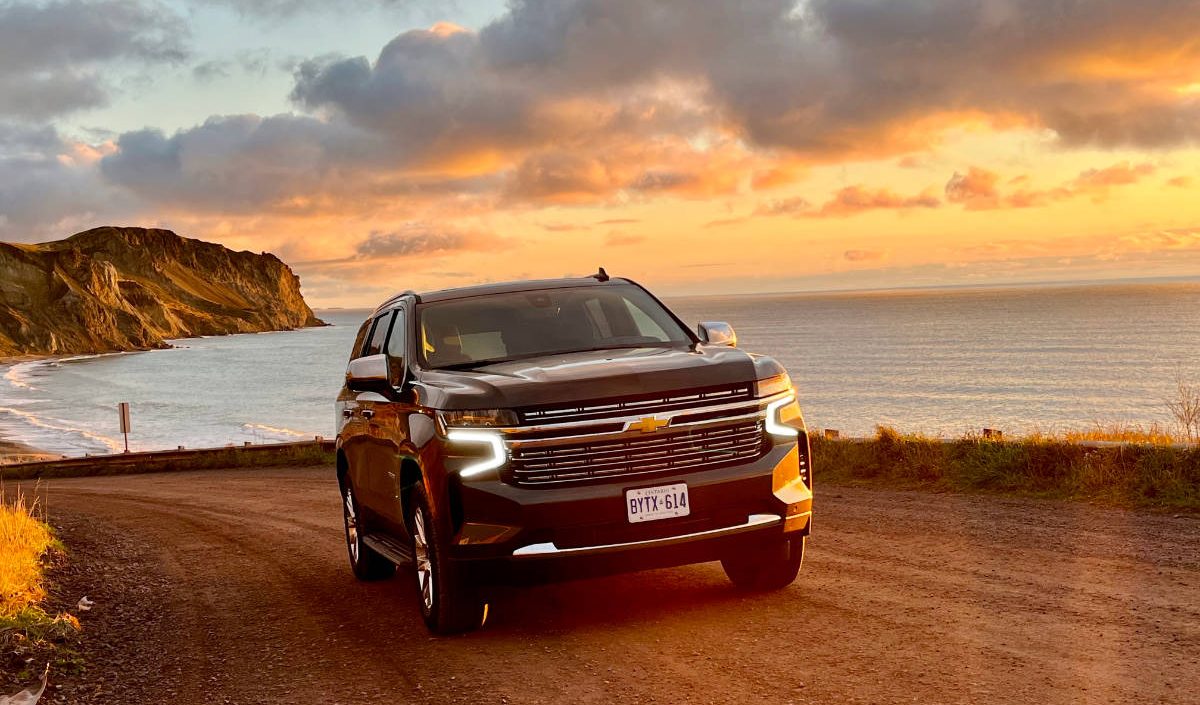 Months after our 60-hour road trip to the Magdalen Islands is over, I can still feel the island love hangover, the guaranteed result of a visit to the remote island paradise with which we have been smitten since our first visit a few years ago. 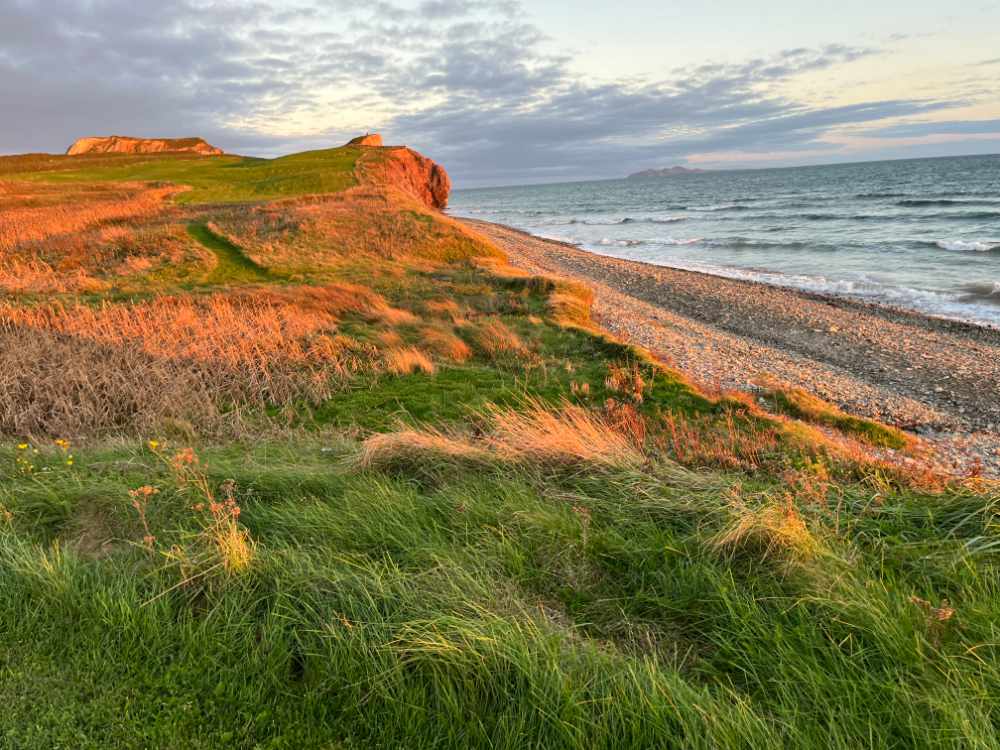 Les Îles-de-la-Madeleine, Québec are a cluster of small islands, forming a lovely archipelago in the heart of the Gulf of Saint Lawrence.

Despite the untouched beauty, Acadian charm, and the fact that the islands are part of Canada, les Îles-de-la-Madeleine, are relatively unknown.

The people of Quebec, though, are in on the secret. The 13,000 Madelinots that live full-time on the islands are joined in the summer by visiting family and tourists, tripling the population.

The islands are a five-hour ferry ride from Souris, Prince Edward Island. Back in October, with only one weekend free, we decided to make ‘getting there’ part of the vacation. Two ferry boat rides. A three-hour road trip to and from the ferry. We would have a glorious full day on the islands bookended by two evenings.

Our good friends, Marie-Paule and Guy LeBlanc from Moncton were ready for the adventure.

With its tall stature, massive windows, panoramic roof and an attitude that says ‘give me a mission and let’s go’, the 2021 Chevrolet Tahoe is all Business Class – the quintessential road trip vehicle for two couples. Extra luggage? No problem. Should we bring a big cooler? By all means. What about the kitchen sink? Well, that will fit too!

A good-looking rig that can be dressed up or down, this particular Tahoe was powered by a super-efficient 3.0-litre turbocharged diesel engine.

The crossing from Souris to Cap-aux-Meules is provided by the CTMA, a transport company formed by the islanders in 1944 (Coopérative de Transport Maritime et Aérien). Staff is friendly, boarding is efficient and watching the process is all part of the fun.

On board, you can always eat and drink, of course. Sitting outside is a preferred option. Even a sharp October wind won’t penetrate the sheltered sunny nooks around the ship.

You’ll want to be outside on the deck when the first enchanted island of the archipelago, Île d’Entrée, mythical with its steep red cliffs, appears on the horizon.

It’s still an hour to the dock at Cap-aux-Meules and the islands tease you. Their curved hook-like form confuses your sense of direction.

The beautiful Domaine du Vieux-Couvent, a lovingly restored former convent and girls’ school, is our home for two nights. Friend and owner Denis Landry and his staff are warm and welcoming.

The 11 rooms are thoughtful, elegant and refined. The phenomenal art collection, scattered throughout the hotel, always leaves us speechless. And the food… ooh la la!

The hotel’s location in the middle of the archipelago makes it the perfect base from which to explore. Head left (south) out of the driveway and you’ll drive through the most inhabited of the islands.

Historic La Grave, site of the first settlement and the first fishery, with its quaint, shingled shops, was shut down for the season. Poking around for the perfect Madelinot souvenir would have to wait until next time.

One should certainly visit the artisanal soap-making studio La Fille de la Mer, where Ariane Arsenault creates whimsical soaps with ingredients foraged from the shores of the islands.

Sampling the delicacies of the 80-year-old smokehouse, Fumoir d’Antan, where the Arseneau brothers carry on the traditional methods of smoking fish is a must, as is savoring the creamy goodness of the cheese from the Fromagerie du Pied-de-Vent. 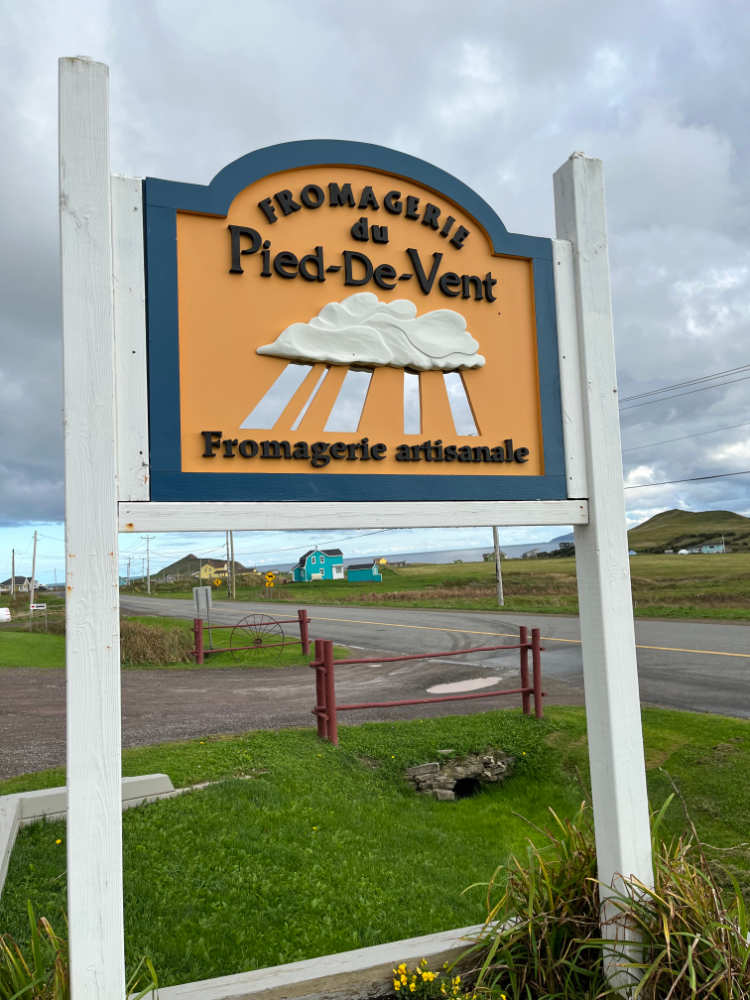 But here in this remote other-worldly place, with hundreds of kilometres of open ocean between you and the rest of the planet, driving to the end of every road and ‘gazing out to sea’ is sometimes the most fulfilling entertainment of all.

And that’s what we did.

Les Îles-de-la-Madeleine sit atop ancient salt domes and cover a land area of 205 square kilometres, less than half the area covered by the city of Montreal. Eight major islands make up the archipelago. 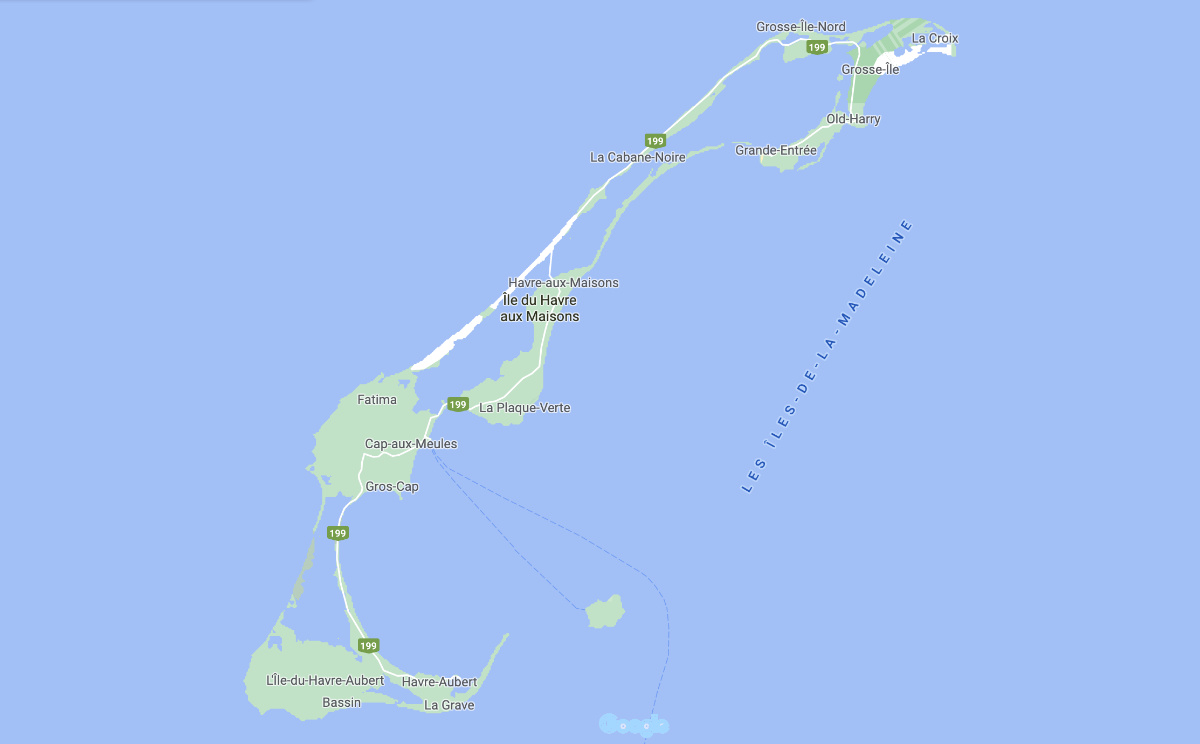 You can drive from one end of les Îles-de-la-Madeleine to the other in just over an hour. But what’s your hurry?

The islands boast striking scenery around every corner. Of the 435 kilometres of coastline, 300 kilometres are white sand beaches. Vibrant red and gray sandstone cliffs plunge into a cerulean sea and rolling dunes of multi-hued sea grass ripple in the wind. 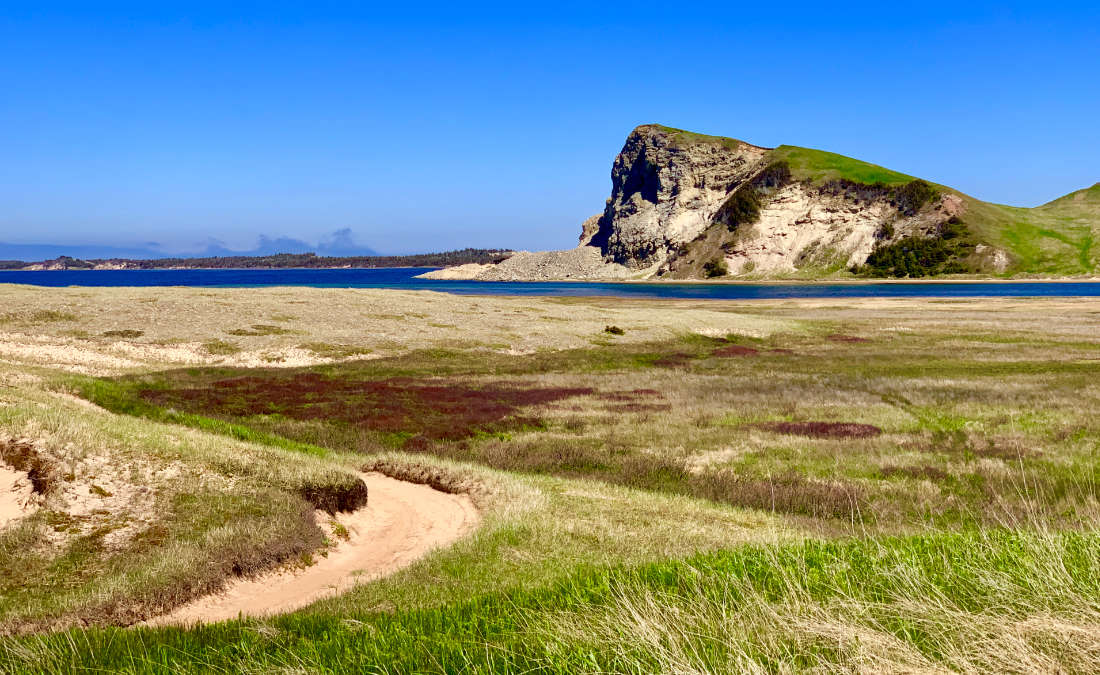 One minute, you’re driving along a sandbar, the turbulent sea on either side. The next kilometre could find you staring across a lagoon from high atop a cliff, other islands stretching out like a fairy tale mirage to the horizon. A few kilometres later, pine forests touch the roadside, reminding you you’re still in Canada. 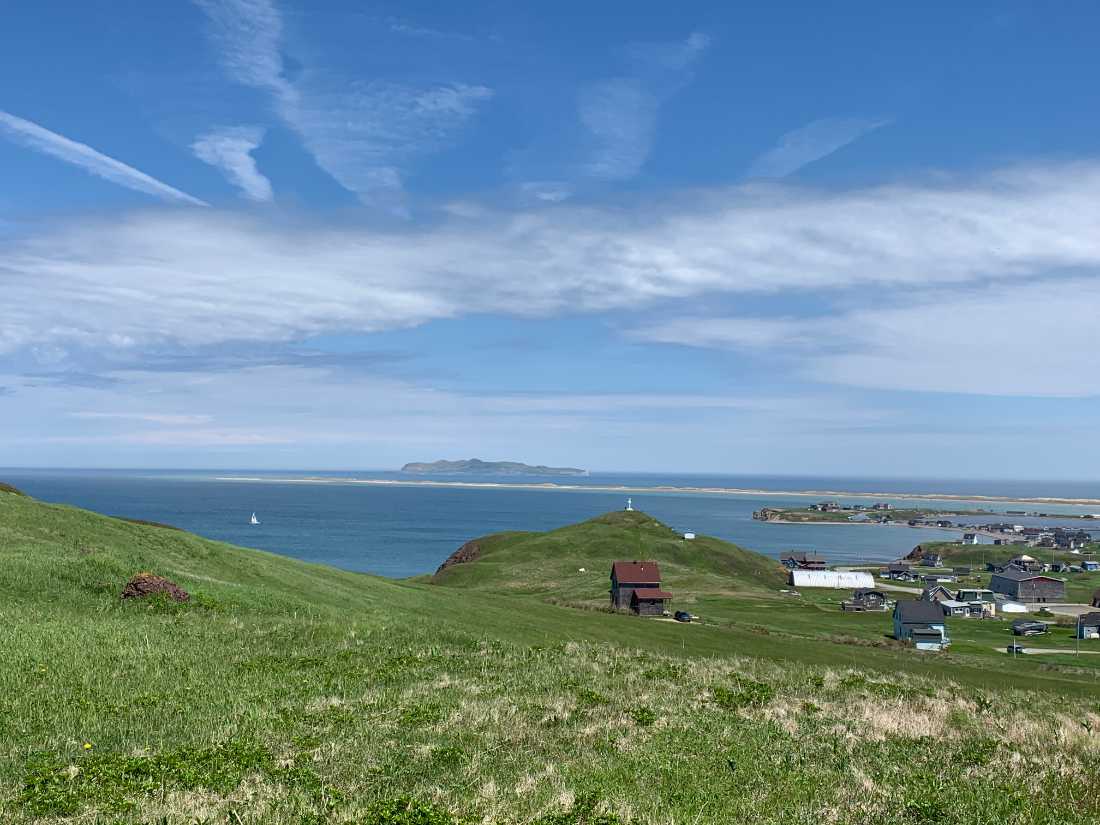 The Chevy Tahoe proved an admirable companion. It’s sturdy and utilitarian and feels like you’re driving a go-anywhere piece of equipment. It tackled mud, high water and sand. Yes, we ventured a bit too far onto a beach, but the Tahoe handily escaped, like it was born to do.

Spectacular vistas are guaranteed on the Maggies.

The sunrise took our breath away. Three different rainstorms scudded over us in the afternoon as we headed north, whipping the moody sea into a frenzy. Then, an ethereal rainbow appeared and finally, sun. 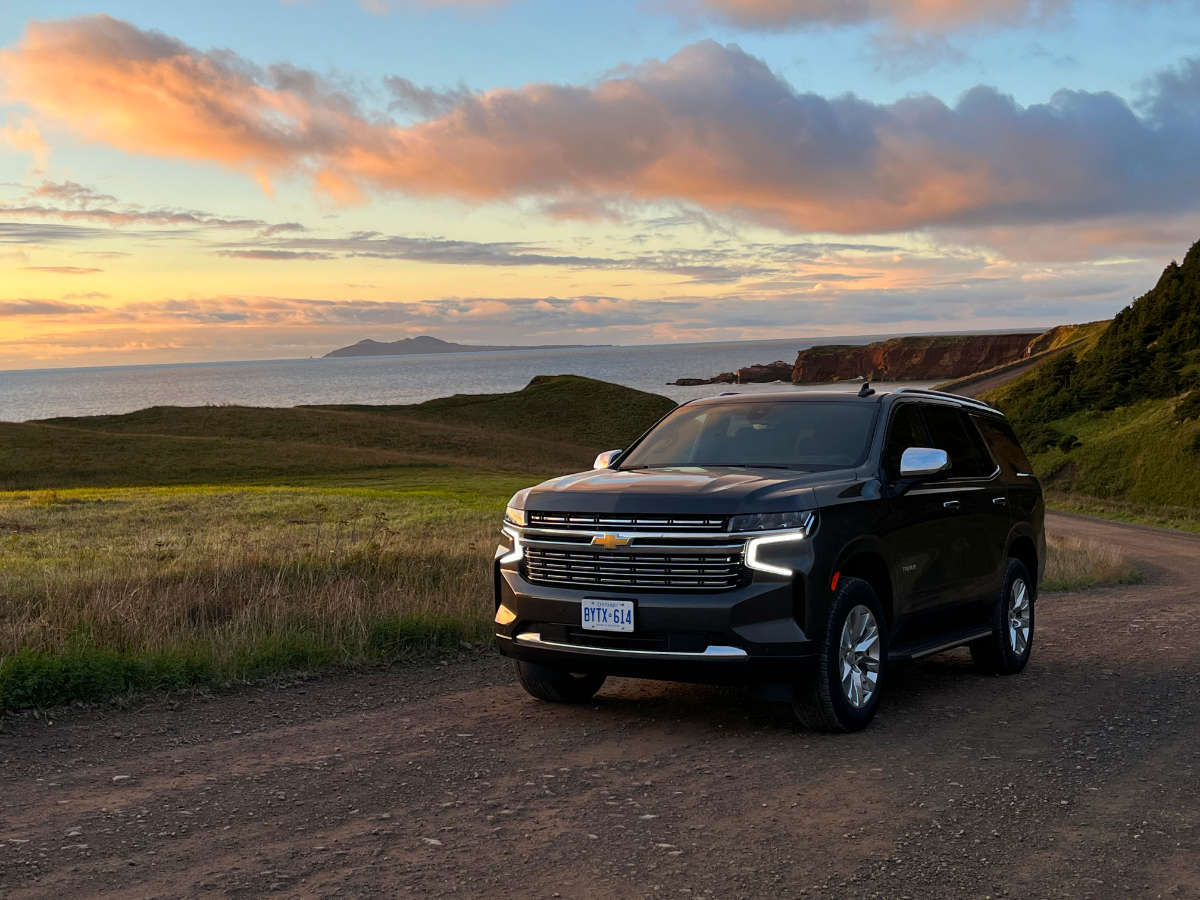 We swung from swings at Auberge La Salicorne, relishing the ocean view. We drew a massive heart in the sand on the Pointe-aux-Loups beach and played in the ever-present wind.

When a seal popped its glistening head out of the waves, we all squealed with delight. It disappeared for a moment, then 15 shiny heads appeared! The boisterous crew seemed as excited as we were.

Yes, we had only one full day on the archipelago. But what an unforgettable day! I’ll forever remember watching the fiery sunset, perched at the edge of the world.

As Marie-Paule put it, “We saw so many things. Even if we didn’t get to stay long, at least we got to go!”

After all, a small taste of the islands is better than none.

The Îles-de-la-Madeleine are certainly off-the-beaten path but no matter the season or the weather, they are worth the journey. They say as soon as you leave, you’ll want to come back. So true.