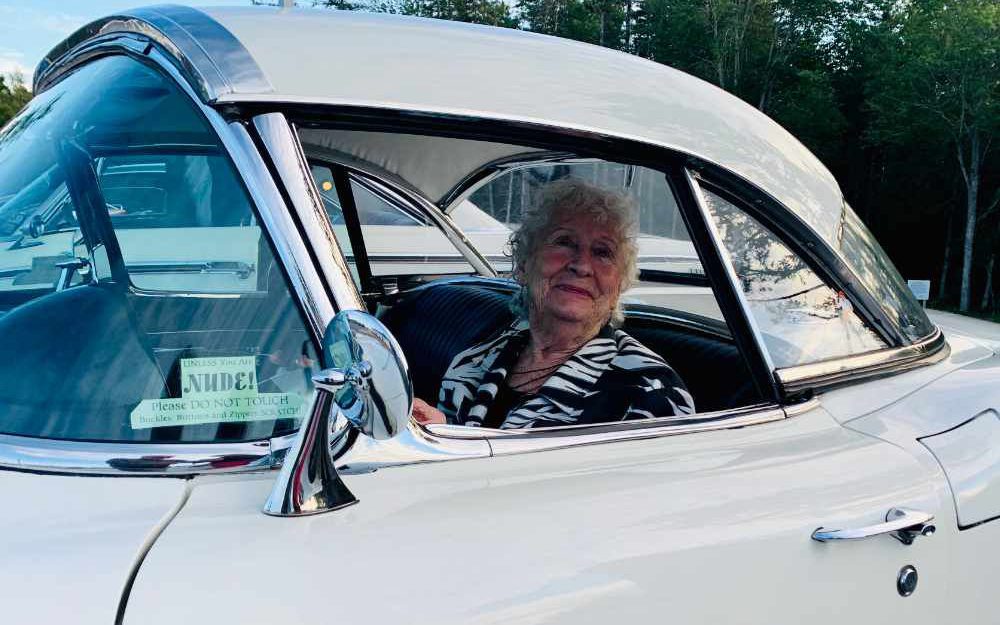 Edith is one of my biggest fans when it comes to my stories and reads every single one even if the subject matter is always cars, cars, cars. She knows more about cars than you’d think but, in the 24 years I’ve been married to her son, Garry, I have never seen her behind the wheel.

I’ve heard stories about her various driving experiences and escapades, though.

Her husband, Lee, my father-in-law, was a car nut. Among the string of Buicks and Mercury cars he went through during Garry’s childhood, there was usually a work truck of some kind in the driveway as well.

In 1948, when Edith was a young mother of 21 years, she decided she needed to drive.

A woman driver was a rare sight in those days. None of Edith’s same-age female friends were driving and, considering she grew up in a family that did not own a car, this was quite an accomplishment.

Although Edith had been tooling around town in Lee’s 1947 Chevrolet for a while, she did not have her official license. I ask her if she found the driving test difficult or nerve-wracking. Edith laughs as she tells me she went to inquire about getting her license from a police officer who lived up the street.

The officer’s official reply: “I’ve seen you out driving, sure, you can have your driver’s license.”

She remembers driving quite often – trips to the beach with her young kids and her sister, groceries, the usual errands any mother would have about town.

“I even drove the gas truck!” At the time, Lee was working for an oil company and the truck-du-jour was a fuel delivery truck. I praise her driving skills and ask if she enjoyed driving.

“When I drove, nobody could talk.”

I’m sure her rambunctious twin boys, Garry and Larry, and older brother Bruce, would have been oblivious to her desire for complete focus on the road ahead.

She recounts an episode where the twins wouldn’t stop kicking the back of her seat. She abruptly stopped the car, got out, opened the back door and gave them a heated talking-to, quickly diffusing the distracting behaviour.

“Then there was the time I stole the car,” she grins sheepishly.

After a spat with her husband Lee, she stole the car and went joy-riding with Lee’s mom. With a bit of a lead foot, she sped by a group of priests walking along the side of the road. She must have put the fear of God into them and as the holy men scattered, Edith’s mother-in-law complimented her clever driving. Badass.

I wanted to know if she’d ever gotten into an accident while driving. She cast a guilty glance at Garry. Since her son wasn’t really listening to our conversation, Edith proceeded to whisper to me that she backed into a car once, leaving the grocery store.

She left the scene of the crime, drove home and confessed to Lee.

He went back to check but said there was no damage. Ah the fifties.

Another story surfaced, not featuring her driving prowess, rather her vehicle identification expertise.

Edith was finishing up some shopping and Lee had told her he would be another half-hour. She would wait in their ’68 Thunderbird until he was done. Arriving at their parked vehicle, she threw her parcels into the backseat and hopped into the front passenger seat.

After 10 minutes, a gentleman approached the car and asked her who she was waiting for.

“My husband,” she answered. I can almost hear the clipped mind-your-own-business tone in her voice.

“Well, this is not your husband’s car.”

My beet-faced mother-in-law beat a hasty retreat and found her same-coloured T-Bird a few spaces back. To this day, she claims the most embarassing moment was when she had to open the back door in front of the man to retrieve her parcels.

There’s also the time she drove to work in the rain, windshield wipers on high. After her work day, she came out into full sunlight but had to drive all the way home with the wipers still going because she couldn’t figure out how to turn them off.

I would have loved to ride shotgun with Edith behind the wheel.

Alas, after 75 years of being a licensed driver, she no longer renews her driver’s license. But, if she took the test today, I’m sure she would pass with flying colours.