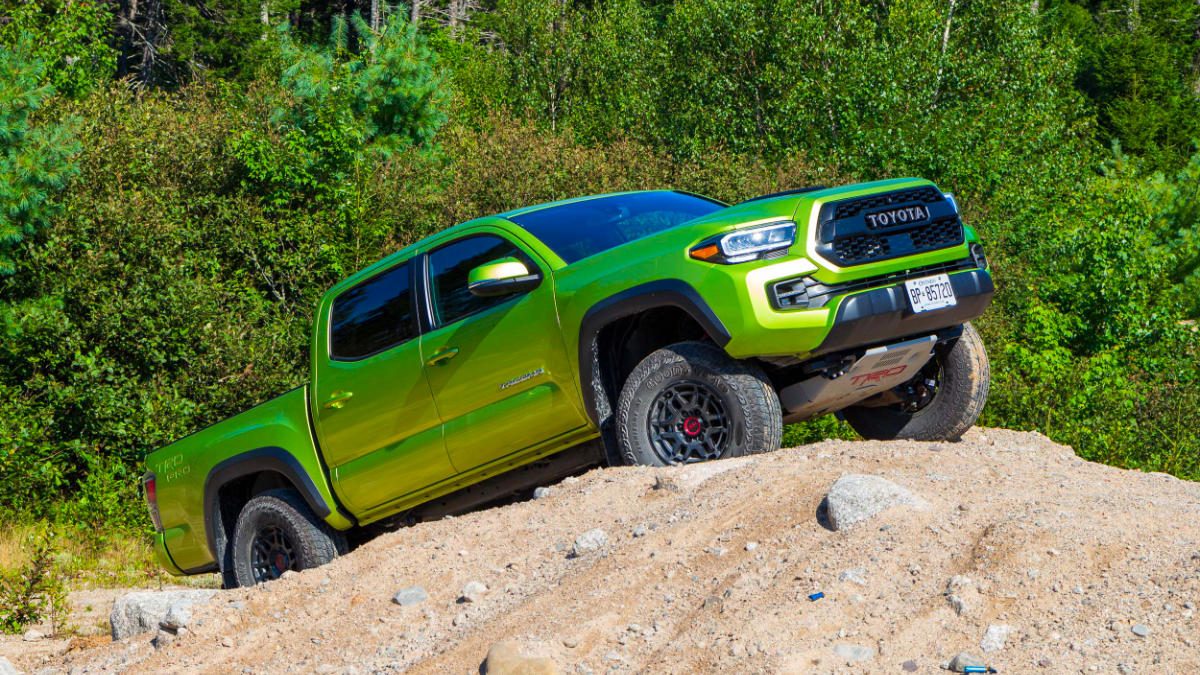 Get lost! It’s what the 2022 Toyota Tacoma was built for

Some trucks come with enough tech to make sure you never get lost. Other trucks are designed and built purely to make sure that you do get lost. In the best possible way.

It’s how I started off on one of Nova Scotia’s coasts and ended up on another, mostly by accident.

Parts of Nova Scotia are little more than lakes and trees.

The lakes are beautiful, but it’s because of the trees that you can’t even see most of them, let alone get anywhere near them. For centuries those trees have meant logging, and logging has meant roads. Those roads are what let us get near the lakes.

Most of those roads are barely worthy of the name, but there are a lot of them and they cover a lot of territory. ATV riders know about many of them already but they shouldn’t get all of the fun, should they?

Not when a truck like this Toyota Tacoma TRD Pro exists. It’s made to head down roads and trails that even ATVs are going to struggle with.

Between buying back land after the Bowater debacle and the twinning of Highway 103, the province has created a great new access to one of the biggest road networks. Parking for the trailers of ATV riders, not far from pavement and St. Margaret’s Bay, but open to anyone who has enough ground clearance – or recklessness – to make it down in their ride.

I remember when these dirt roads were in good enough condition to drive a car along them.

The network of hiking trails around six klicks in was a hidden gem and maintained by Bowater (at least that’s what the sign said). Now you’ll need a serious SUV or pickup to get there. Keep heading that way for long enough and you’ll end up at a wind turbine farm. I took the GMC Yukon AT4 up there a few years back.

Unlike the massive Yukon, the Tacoma is downright nimble on these roads. Toyota lifted the TRD Pro this year, and added new suspension control arms that add travel to help.

The result is a truck, the Toyota Tacoma, that doesn’t care about rocks the size of soccer balls sticking out of the dirt.

A truck that doesn’t mind when streams have carved diagonal channels across the trail deep enough to swallow tires smaller than these 31-inch tall Goodyear Wrangler Territory Mud Terrains.

What’s the point of this capability? To keep exploring. To drive further into the woods. I don’t have a map of these trails. I’m not sure one exists. So I take whichever one looks like more fun. Lefts and rights. U-turns at dead-ends, and a few chances to use 4Lo and crawl up and down boulders and two-story piles of dirt left behind by forestry and road construction.

The dozens of empty shotgun shells and way too many empty beer cans show that I’m not the only one finding these places. The rust shows that I’m the first one to come by a few places in at least a few weeks.

It’s quiet out here, at least when I stop to take a photo or two and let the dust clear. It’s painfully obvious how dry this summer has been when you’re this far into the wilderness.

It must be beautiful at night, I think, though I’m not sure I would want to be out here when the wildlife comes out to roam.

I’d be driving a lot more slowly, even with the Rigid Industries LED driving lights.

I had planned on spending less than an hour on the logging roads today, but when a truck enjoys it as much as this Tacoma it’s hard to stop. That’s why after more than two hours, I have no idea where I am, but I know that it’s probably time to turn around.

But then I stop one more time and I hear it. The unmistakable sound of a highway, much closer than I had expected.

Which highway, is the question, and where along it was I? The road I’m on happened to run right up to what I can figure out is the 101 (that concrete section is unmistakable), but there are enough trees and cleverly placed rocks that I can’t get onto it.

So I keep going, heading north. The road is gravel, but now it’s well maintained. And straight as an arrow, so I can pick up speed and find out how the truck works on very different terrain.

I slow for a sharp turn and there it is.

A stop sign and pavement. My off-road adventure is probably over for today.

Where am I? Saint Croix, just south of Windsor along the 101. I’ve started from St. Margaret’s Bay and ended up a hair shy of the Minas Basin, and all of it without touching asphalt. I wish I had worked a little harder to find a way to bypass this bit of highway to make it all the way to the other coastline, but I don’t think it’s possible. At least not today.

An off-road ride like this Tacoma isn’t for me. As much as I love exploring, I spend a lot more time on paved roads where I care more about fuel economy, ride comfort, and, of course, cornering.

Would I love to have one in the garage, though? Absolutely. Load up the kayak, my dog, and a cooler full of water and go find new lakes, rivers, and experiences. We already know Nova Scotia is beautiful, it’s just that some of the beauty is a bit tougher to find.