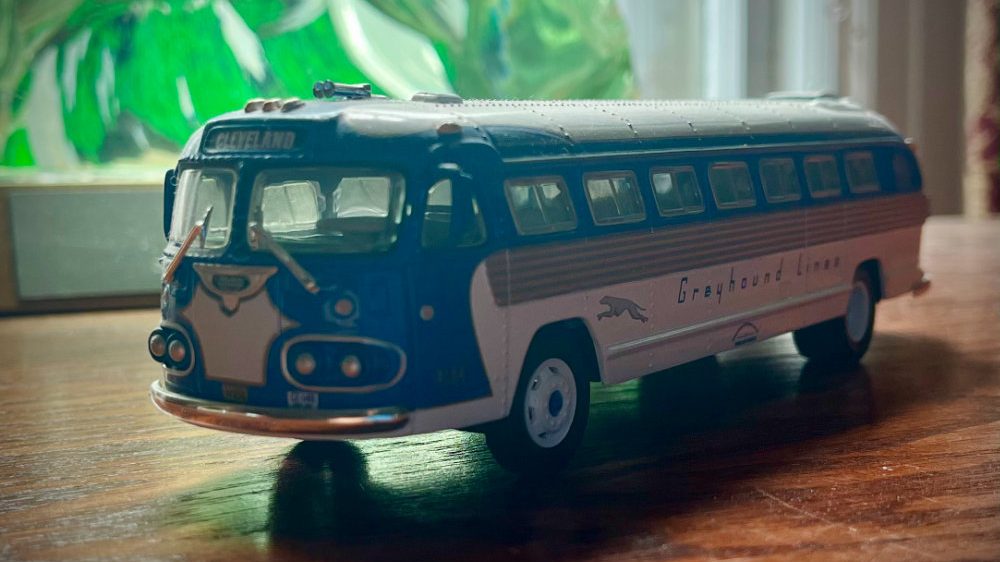 Wheel Woman: The Cars in our House

We have a collection of 11 eclectic and eccentric cars and trucks. They are life-size of course.

We also have, as I discovered this past weekend while laid up with an injured knee, about 50 smaller-than-life-size ‘toy’ vehicles scattered throughout our house. I’ve always known there were lots but we’d never counted them before, much less gathered them in one place for a photo shoot. 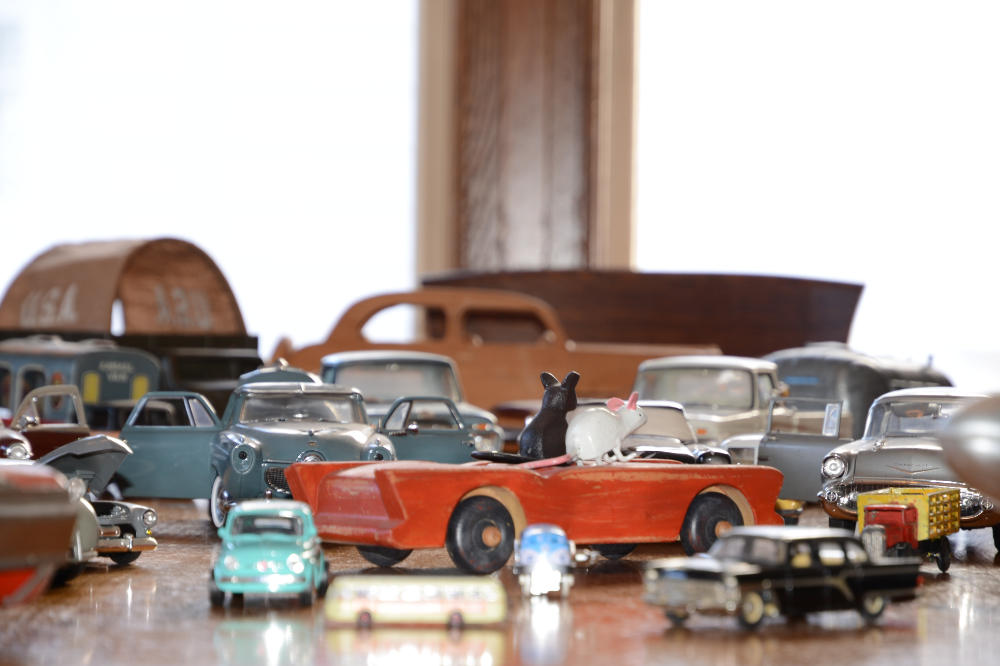 Each of the model and toy cars in our collection have some significance in our lives, not necessarily to do with their collectability, pristine condition or resale value.

A 1959 Cadillac in ceramic doubles as a candy bowl. A ‘Bullet Nose’ Studebaker was bestowed upon me as a birthday gift one year, as well as a 1952 Kaiser Manhattan. At the time, I had never even heard of a Kaiser. 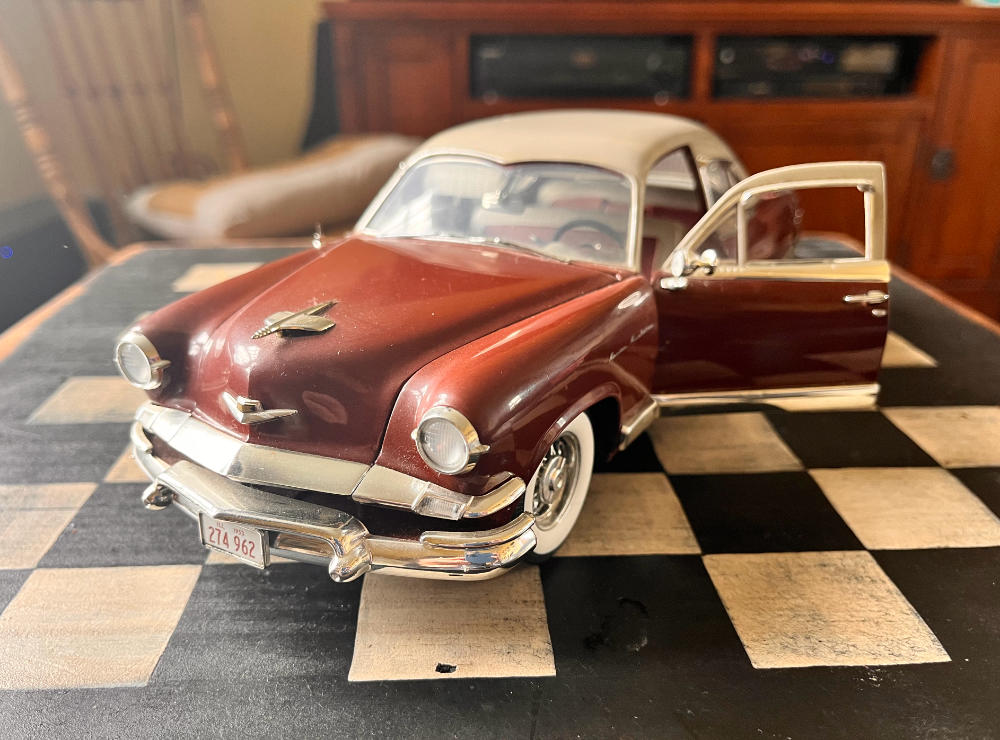 I have a 1965 Ford F-100 (V8) husband Garry gave me to commemorate my year of birth. It sits on my dresser and the bed is loaded with hair accessories. Probably not the intended cargo for this pickup truck but such functionality, right? 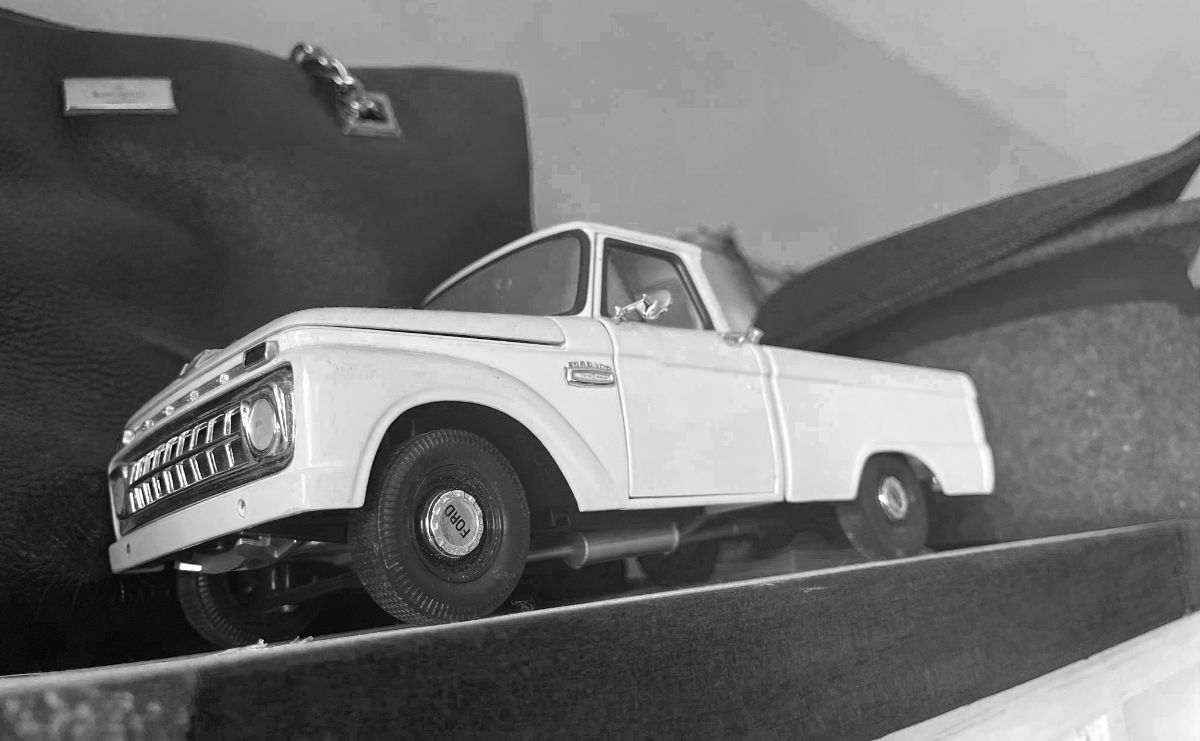 We have a 1953 small-scale British coronation coach with four riders, seven horses and one renegade horse that didn’t see fit to stay in formation. 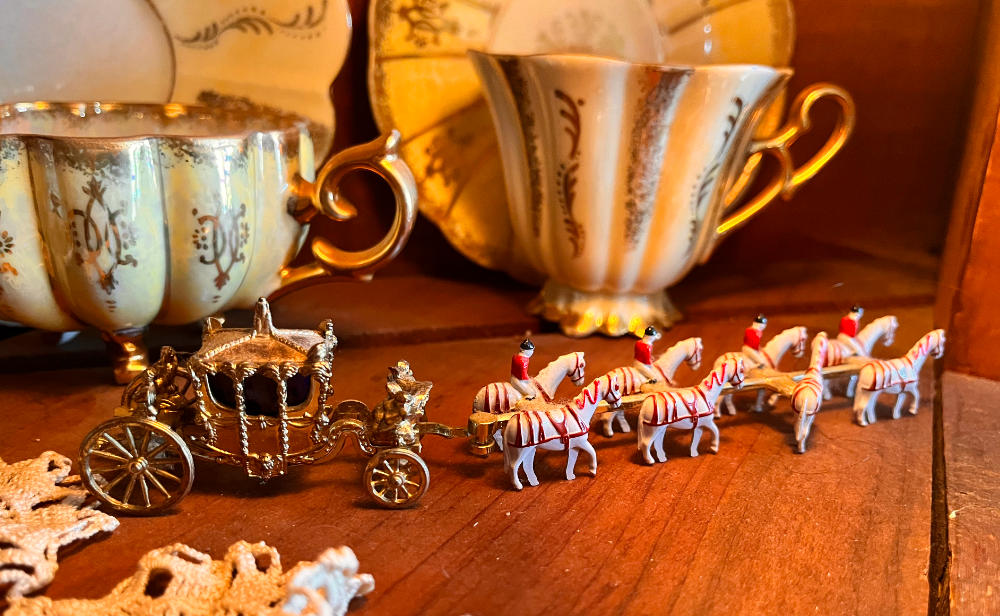 I love the rough-hewn wooden car that daughter Layla brought us back from Cuba and the ‘Animal Van Truck’ that has two lions in the screened-in back. The lions move up and down in conjunction with the wheels of the van truck as they roll.

A 1935 Texaco Doodlebug: design ahead of its time

A couple of our ‘house’ vehicles are ‘piggy banks’, coin containers not bearing any likeness to a pig whatsoever, one being a 1949 Custom Mercury and the other, one of my favourites, a Texaco ‘Doodlebug’.

The futuristic, streamlined 1935 Texaco Doodlebug tanker truck was designed by two industrial designers, Norman Bel Geddes and Walter Dorwin Teague, hired by Texaco to ‘clean up’ the image of the oil company. 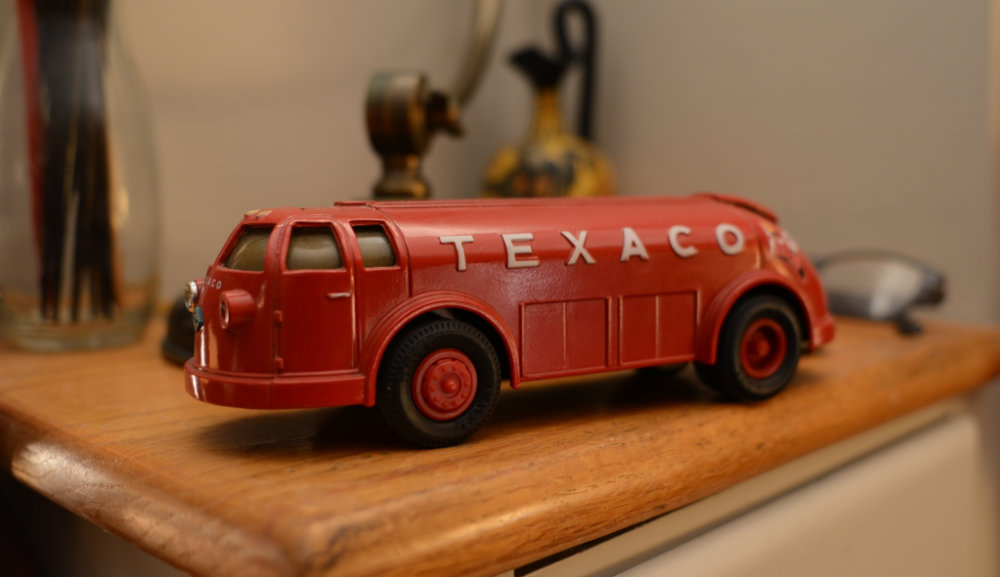 In the 1930s, ‘Big Oil’ was battling ‘Big Coal’, deemed dirty and somewhat ‘passé’ with delivery trucks that were covered in soot and dirt. Texaco hired the designers to revamp its image and design a series of eye-catching, clean tank trucks. Six were built in total.

The ‘breadloaf’ or pill-shaped truck was architecturally ahead of its time.

It was all one piece, there were no fenders, no hood, no runningboards and the windows and windshield were curved. It would be 20 years before the curved windshield would enter mass production when Chrysler began building the 1957 Imperial.

The wheel cutouts with the ‘eyebrows’, giving the Doodlebug quite a jaunty air, were three decades ahead of the curve. It would be the 1966 Toronado by Oldsmobile that would re-introduce this look to the public. 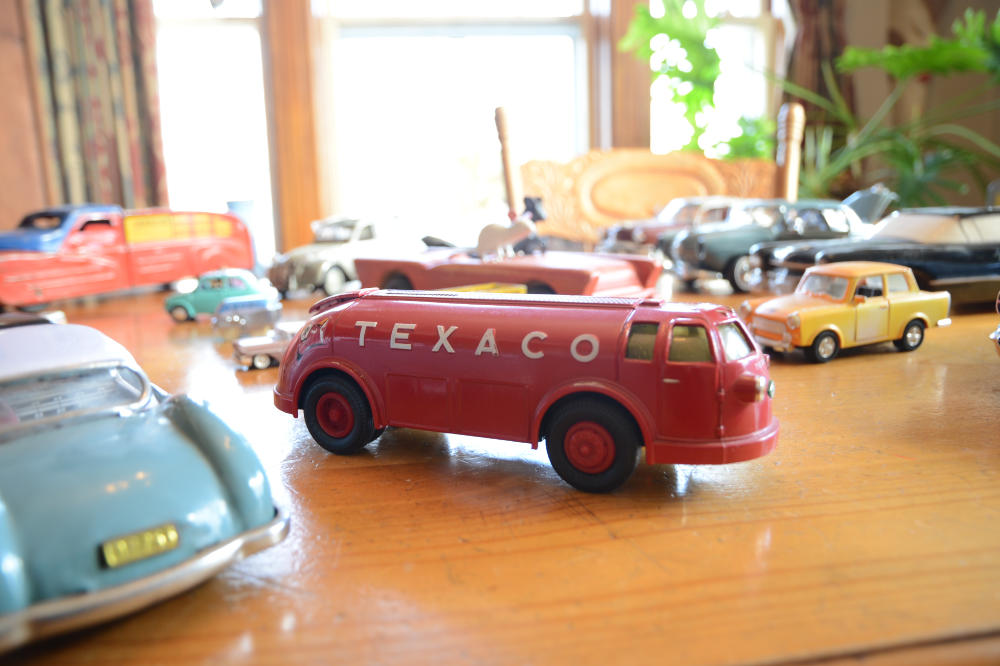 The Doodlebugs were built by Heil Co. in Alabama, on a Diamond T chassis with a six-cylinder, rear-mounted engine and a four-speed manual transmission. There was a microphone mounted in the engine compartment and a speaker in the cab so the driver could tell when to shift gears.

For me, discovering such a unique and interesting vehicle was like finding out about a new genre of music. 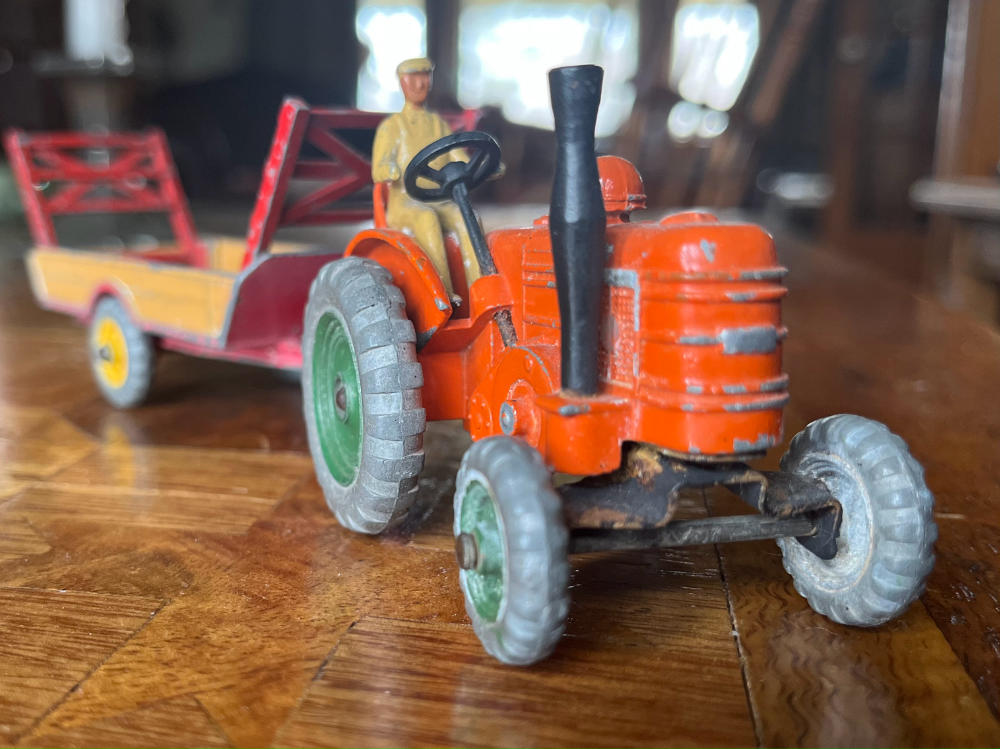 Of course, the Saturday night would not be complete with a full detailing session on all of the vehicles before we return them to their respective places throughout the house. We sure know how to have a good time.

Next weekend: Animals!! I can see seven from where I’m sitting right now. 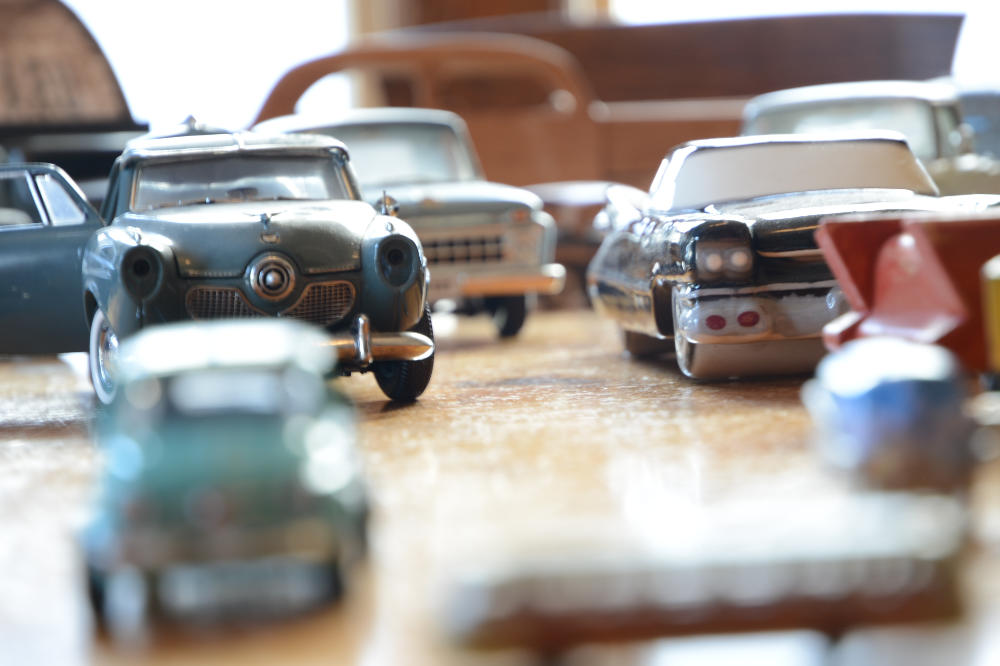