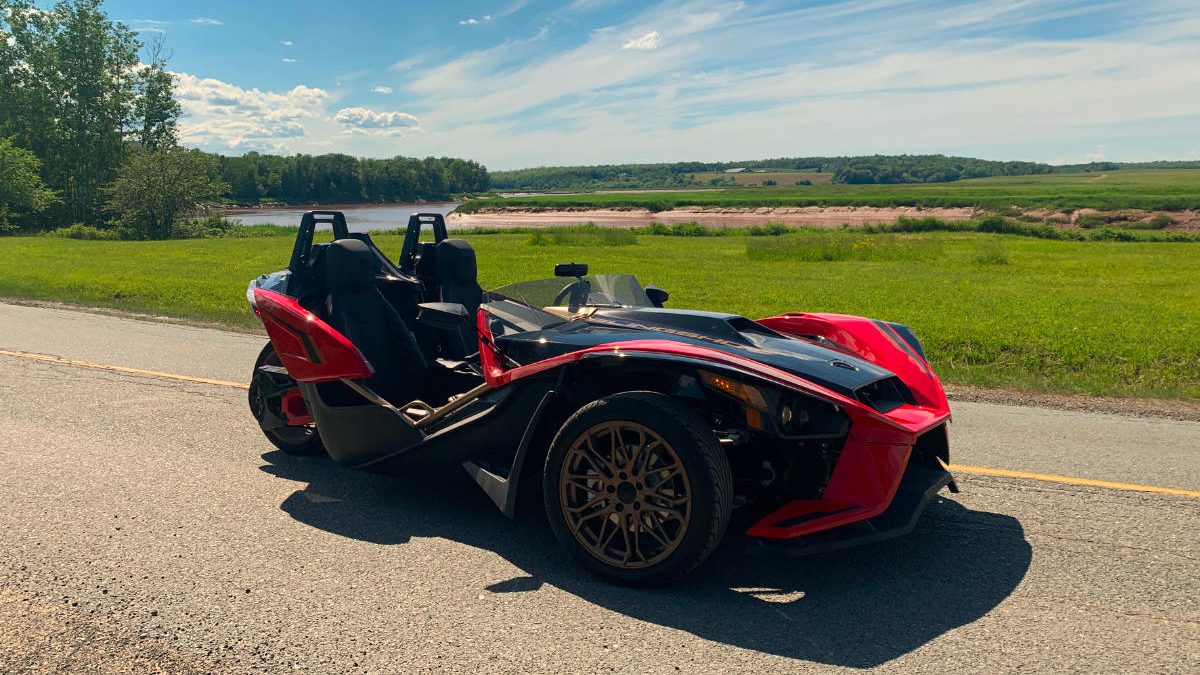 Driving from Masstown Market, one of Colchester County’s best-known gems, to the North Shore near Tatamagouche usually takes about 45 minutes. A quick jaunt on the Trans-Canada Highway followed by a dart through the Wentworth Valley before heading across one of the many rural routes in this neck of the woods is generally all it takes. Job done.

Not in a Polaris Slingshot.

Oh, don’t get us wrong. It’s not that the Slingshot is slow – far from it, in fact – or that it’s uncomfortable or difficult to drive.

Despite being a full-fledged toy, this three-wheeler manages to check off those livable boxes with relative ease.

No, it’s the fact that every fuel stop, every coffee break, and every run through a populated area takes twice as long thanks to the number of people asking questions and making you part of their latest Instagram Reel.

In other words, this thing ain’t for introverts. Which is why we think it’s tremendous, of course.

There’s little rationality to buying a three-wheeled vehicle with no roof and limited storage capacity. Polaris introduced it back in 2015, following three years of development into the areas like space-frame chassis work and coil-over Sachs dampers.

Blending their experience in polymer body panels and their engineer’s abilities to create side-by-side machines which offer more fun per square inch than just about anything else on the road (or off it, for that matter).

While the Slingshot has been in Polaris’ lineup for a few years, its engine is now a mill of its own design.

Gone is the 2.4L EcoTec boat anchor which was borrowed from General Motors, replaced with an engine Polaris calls the ProStar. Displacing just 2.0L, both tunes – 178 hp in our tester or 203 hp in R trim – provide more power than the EcoTec and do so with a power delivery which better suits the personality of this fun-loving three-wheeler.

Peak power shows up at a sky-high 8,500 rpm in this Signature LE model. Running through the gears to that engine speed produces a high-pitched harmonic and vibration, the one you’d imagine is made by Paul Bunyon sharpening his knife on a giant leather strap or aliens landing to take us all away.

Brakes will be familiar to anyone who has ever driven an off-road vehicle from the powersports realm (a market in which Polaris has significant experience, after all) but may feel strangely firm to newbies.

In other words, make sure to stomp on the pedal with a lot more vigour than one would in a MX-5 or GT86. After that learning curve, the brakes are predictable and offer plenty of stopping power for this 1,600-pound oddity despite only having three braking points, not four.

Slingshot’s interior will also be familiar to anyone with experience behind the wheel of a side-by-side off-roader.

The set of gauges dead ahead of the driver, which move in time with the adjustable steering wheel, are taken directly from the gonzo RZR Pro R while the excellent RideCommand system is present and accounted for in the 7-inch colour touchscreen sitting dead centre in the Slingshot’s dashboard.

Yes, we’re living in a delightful era in which these types of toys are packed with the sort of technology once reserved for expensive luxury cars.

The RideCommand system is capable of providing navigation and group ride features so one can easily cruise with their buddies without fear of losing them in an unfamiliar spot. These seats are both heated and cooled, while a thumping Rockford Fosgate sound system delivers music through a tuner or Apple CarPlay.

Surprisingly, its speakers are positioned in such a way that one can actually hear their playlist despite a highway’s worth of wind roaring past. The cabin design does a decent job of keeping a lid on buffeting but anything above rural road speeds is going to obviously drown out conversation.

Twin storage cupboards hide behind both seats, large enough to each fit either a helmet or soft carry-on bag (but not both at once).

If you want a license plate for a Polaris Slingshot in Nova Scotia, you’ll have to wait… indefinitely

There is one wrinkle to owning a Polaris Slingshot in one of the four Atlantic provinces – namely the one with a blue-and-white flag and more Scottish heritage than Groundskeeper Willie. The crew at Nova Scotia’s DMV have yet to determine a way to classify this thing in their computer system; for now, it’s impossible to get a license plate for a new Slingshot.

However, local gendarmes told us Slingshots are totally legal if bearing a valid plate from another province – as ours was – since every other jurisdiction in Canada (and America) makes registering one of these rockets as easy as plating a Corolla.

Reaching out to those moving the levers of power in the Bluenose province garnered either stony silence or full voicemail boxes, so we’re left to wonder how long this glaring oversight will continue in Nova Scotia.

But all of that is little matter when you’re ripping along a two-lane highway with the coast on one side and a universe of blue sky over yer helmeted noggin.

Broader than a Chevy Suburban at its widest but just a few inches higher than a Ford GT, the doorless Slingshot is an unabashed toy which puts a large grin on the face of anyone who rides in it.