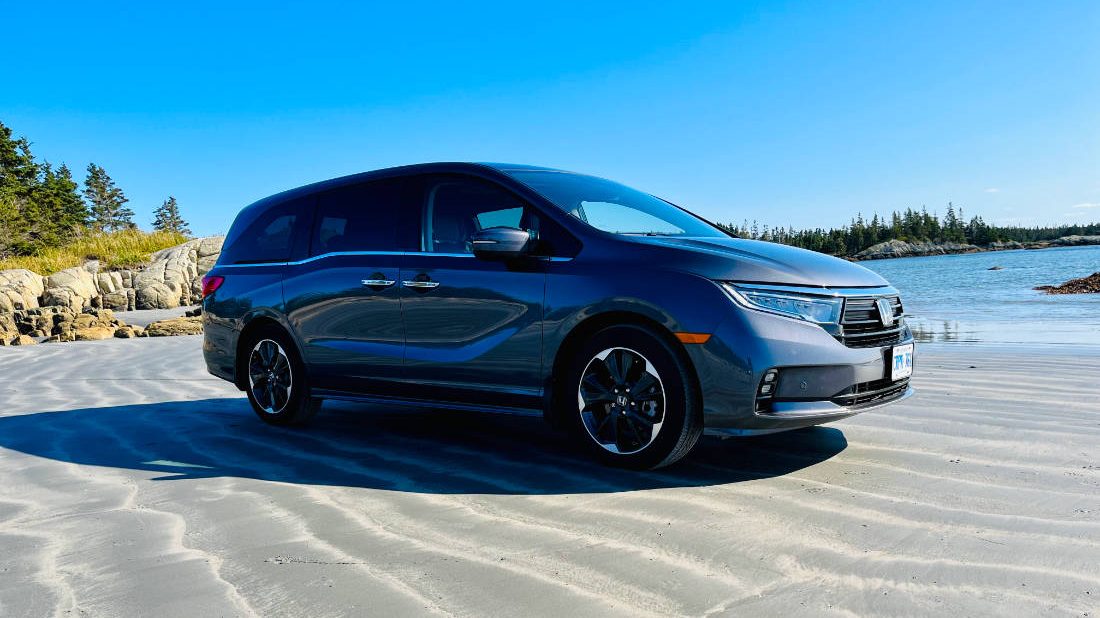 Through the first nine months of 2021, only 2.2 per cent of the vehicles sold in Canada were Honda Odysseys, Kia Carnivals or Sedonas, Dodge or Chrysler Grand Caravans, Chrysler Pacificas, or Toyota Siennas.

Yet in our household, minivans were always just as much a pickup truck substitute as a people carrier.

To be honest, the 2021 Honda Odyssey Touring with which our family of five spent a week in November was called upon far more for its truck-like characteristics than its eight-seat capacity.

Full disclosure: this was certainly not our first exposure to the Odyssey. The last time Honda Canada dropped off an Odyssey, in 2017, we went out and got one for ourselves. Granted, we already had one, a fourth-generation 2015 Odyssey, but after a week in the new fifth-gen model, we were keen to upgrade.

More full disclosure: when it comes to motorized transportation, we’re keen on Hondas.

Oh, we’ve owned vehicles from other brands: a Mazda Miata, Scion FR-S, and Kia Sorento are among the non-Hondas we’ve parked in our driveway over the last decade. But there are now five Honda engines in our garage: two dirt bikes, a lawn mower, a snowblower, and our own Ridgeline.

That’s where this story begins: with the Honda Ridgeline.

Over the last couple of months, we’ve been finishing off a summer of house renovations by overhauling our garage. After insulating and then adding ceiling, walls, heating, and light, the project could only be finished by an abundance of shelving across the 24-foot rear wall.

Visits to the lumber yard require a pickup truck, right?

So I’d have to leave work, drive home to swap the Odyssey for the Ridgeline, and then return to Kensington to load up 184 feet of 2x4s, right?

It helps, of course, that MPVs such as the Odyssey are by no means mini. The 2021 Honda Odyssey is 205 inches long, less than half a foot shy of a Chevrolet Tahoe and nearly 10 inches longer than Honda’s own Pilot. But exterior dimensions tell a small part of a minivan’s story.

The Odyssey’s interior efficiency, certainly aided by one row of disappearing seats, is where the van shines. 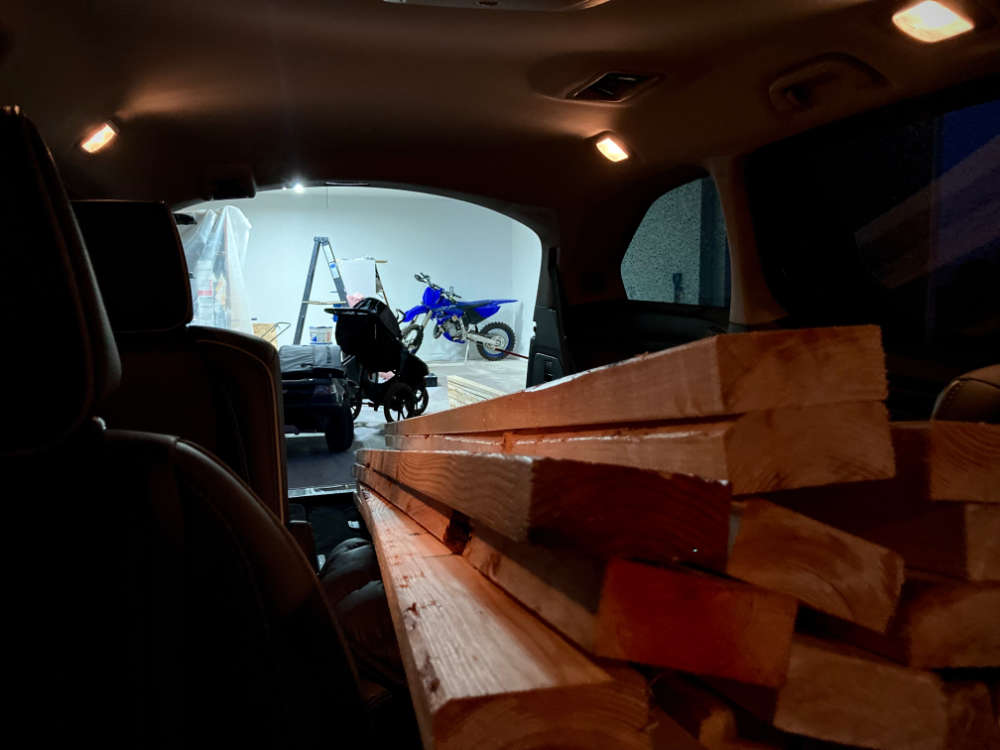 While pickups require the length beyond the tailgate to handle an eight-foot-long piece of lumber – the Ridgeline’s bed is just over five feet long; a typical Ford F-150 SuperCrew uses a 5.5-ft or 6.5-ft bed – the Odyssey swallows it all with the tailgate closed.

The Odyssey can take full 8×4 sheets of lumber behind the front seats. But don’t assume eight feet is the limit. We’re not recommending it, but it takes little more than a quick Google to find Odysseys handling far more than 23 2x4s.

How about a stack of 10-foot beams while still leaving ample seating capacity?

Twenty-three 2x4s, however, was all I needed. Or at least 23 was supposed to be enough until I realized I miscalculated and headed back to Kent on Saturday morning for some more.

The shelving design was made easy by a YouTube how-to video – not in time for us to completely finish the garage reno before the Odyssey’s departure but definitely in time for the Odyssey to pose for a photo.

There’s a driver-centric nature to the Odyssey that isn’t replicated in any of Honda’s rivals. It’s an Accord Xeroxed to 120 per cent. As an Odyssey in top-spec Touring trim, there’s also no shortage of comfort-oriented features: rear seat entertainment, cooled front seats, CabinWatch and CabinTalk, hands-free power tailgate, and countless other items.

But I’m also the first to acknowledge that a minivan, especially a front-wheel-drive minivan, doesn’t fulfill all pickup truck duties. In a household controlled by powersports, the Odyssey’s enclosed cargo area/passenger compartment isn’t ideal for hauling dirt bikes, for example.

Yet after another week in a fifth-gen Odyssey, four years after our last visit and 18 months after we surrendered our own, there is nevertheless a clear verdict.

A proper garage would have one of each: truck and minivan.