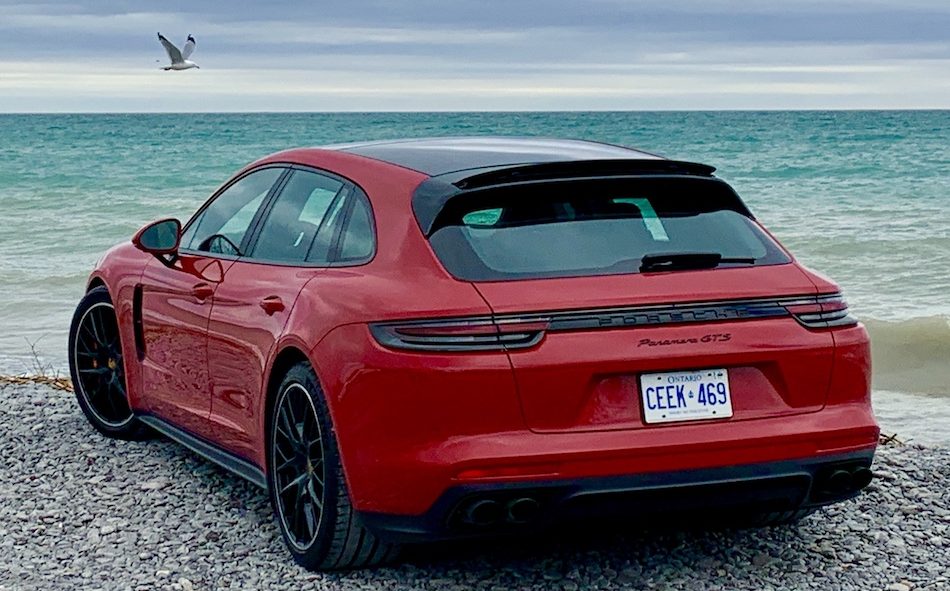 Last year, in Hamburg, Germany, a driver was pulled over by police and told his Porsche Panamera was too shiny.

Bling-y and obnoxious, the gold foil-wrapped Panamera had been in trouble before. The first time, the police ordered the 31-year-old driver to remove the foil wrap, as it could blind other drivers and cause an accident. He was also told to re-register the vehicle once the wrap was removed. The driver did neither and was pulled over again.

This time, he was given a hefty fine, his Panamera was impounded and his driving papers and license were confiscated. They would be returned once he complied.

Thank you, Hamburg Police. Wrapping such a lovely vehicular specimen in so atrocious a manner should be fined.

It’s been over a decade since the Panamera first appeared on the planet. I still remember the hue and cry when it debuted in 2009. A four-door Porsche? The horror! It looked like a stretched-out 911, not necessarily a bad thing, but most Porsche purists were disgusted.

What a beautiful way to move four people around though… and fast!

I had the chance to test-drive Porsche’s two sporty versions of their already-more-than-sporty Panamera. GTS and GTS Sport Turismo are the happy middle ground between the Panamera’s S and Turbo models.

The GTS and GTS Sport Turismo are all-wheel drive and powered by a four-litre V8 engine that delivers 453 horsepower, a 123-hp jump over the ‘base’ Panamera and 97 less horsepower than the Panamera Turbo, with maximum torque of 457 lb.-ft.

The throaty eight-cylinder symphony from the engine, especially when sport plus drive mode was selected, certainly made me want to push the throttle. Deliciously easy to go from zero to 100 km/h, I had to fulfill my duty and ensure the stated 4.1 seconds was accurate. It is accurate – I scientifically tested the lightning fast acceleration many times during my research.

The chassis in the two GTS models has been lowered by 10 millimetres and Porsche has adapted its Active Suspension system for sportier calibration making for excellent lateral dynamics. Dynamic Chassis Control keeps the Panamera flat in the corners.

It’s easy to forget this rocket is a sedan. 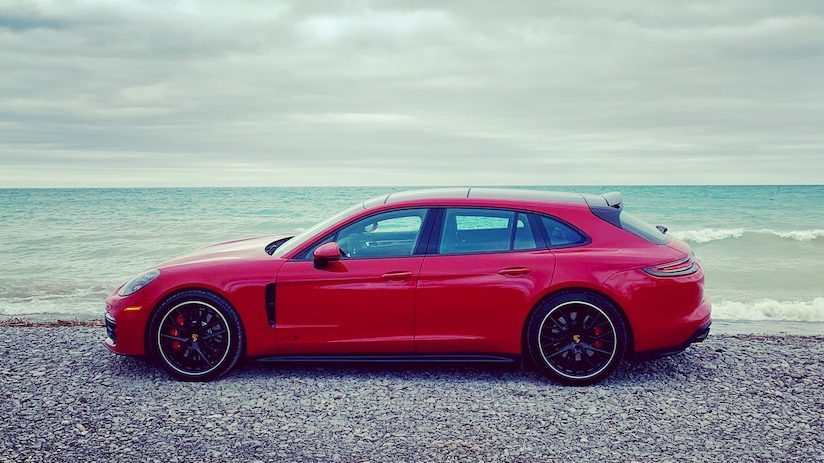 Inside, I am certain this is a Porsche. Many things about the sumptuous Panamera GTS make you feel like a rich so-and-so, but the Alcantara-wrapped heated steering wheel is one feature that spoke full-on-no-holds-barred luxury to me. 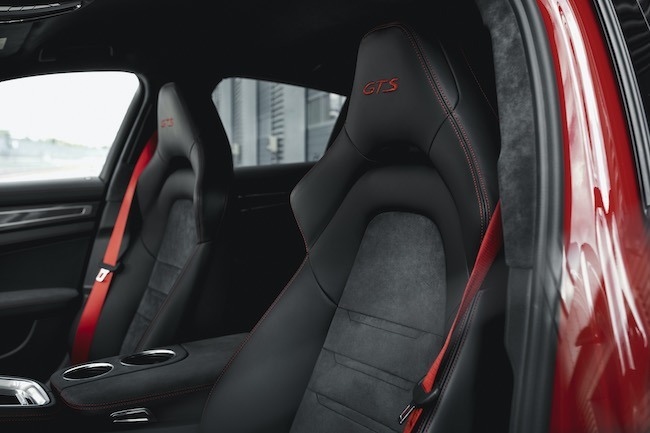 In the Carmine Red hottie I drove, the GTS Interior Package meant the black leather seats were accented by red stitching, the seat belts were a deep red (another favourite feature of mine) and the letters GTS were embroidered into the headrest of the über-comfortable, 18-way adaptable, racy front seats.

The Panamera GTS Sport Turismo (don’t call it a wagon) I test-drove was wrapped in lush Carmine Red. The Mamba Green, not as eye-stabbing as gold foil wrap, is flashy yet refined.

The Sport Design package for the GTS adds a new black front-end, black trim at the bottom of the rear, black window surrounds and black 20-inch Panamera Design wheels. Even a child’s car seat in the back wouldn’t dampen the spicy look of this sedan. You might not be able to pay for said child’s university but that’s what student loans and part-time jobs are for, right?

Although the German constabulary had a problem with that guy’s abominable gold foil-wrapped Porsche Panamera, on my test-drive, I could find no fault with the Panamera GTS and GTS Sport Turismo.

Once you start adding options, both starting prices on the GTS and GTS Sport Turismo speedily jump up. Like going to a steakhouse, getting the $200 steak then quickly realizing you need to add a side of asparagus, baked potato and, what the heck, throw in those sautéed mushrooms, too.

Once you add the half-Boxster full of options, the price tag crowds $200,000 pretty quickly.

The test drive featured highway driving with plenty of opportunity to try out Porsche’s InnoDrive, an advanced adaptive cruise control system that lets you drive hands-free for about 45 seconds.

Country roads and sleepy byways offered the chance to push the Panamera GTS ST into and out of corners, again making me forget I was behind the wheel of a so-called family vehicle and wish I was on a race track.

I swear I kept my responsible safe driving manners out there on the road and was not pulled over by police. My flashy police-magnet red paint was no match for gold foil.

Despite recent claims in the auto industry that the death of the sedan is imminent, as far as full-size premium vehicles go, I think the practically perfect Panamera GTS and GTS Sport Turismo will be around for a long time.