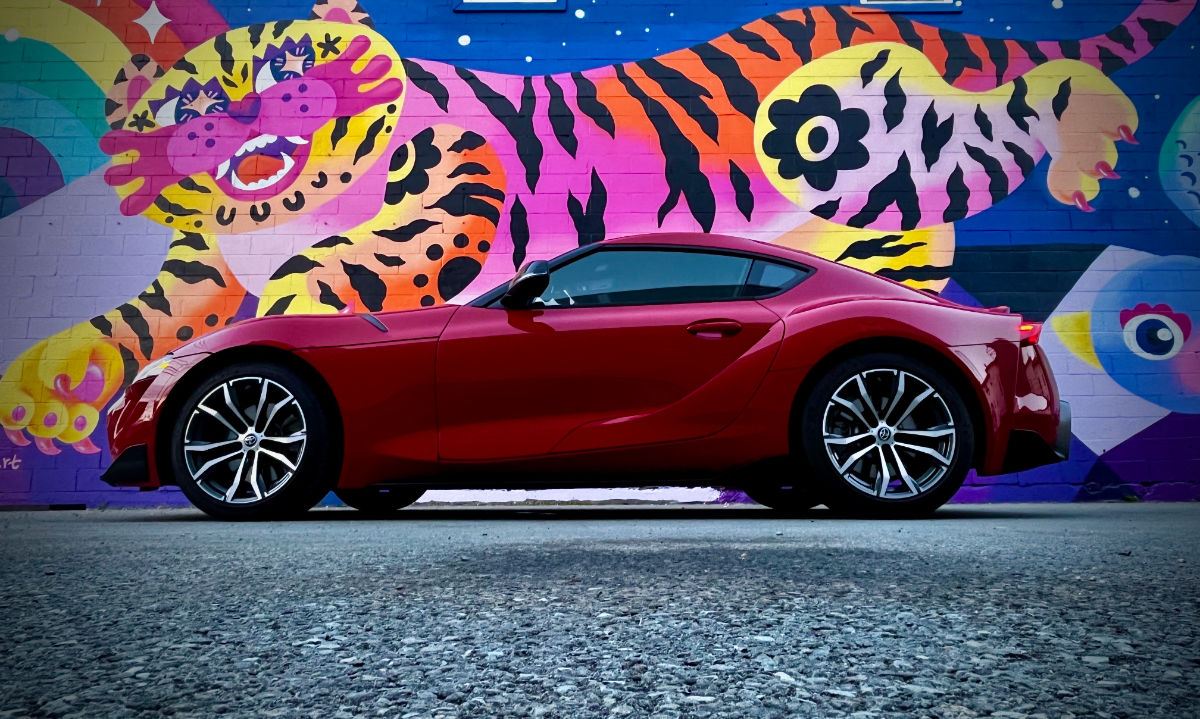 It’s been more than two decades since Toyota stores offered a Supra. The first one appeared in 1978 and the fourth generation in 1998. By that time, the Supra had become an overpriced ($110,000 in todays’ dollars), overweight shadow of its former self. Dealers didn’t want it, nor did consumers, so Toyota pulled the plug.

The Supra is back! And Toyota stores are clamouring to get their hands on this one.

Wait! What? BMW engines in a Toyota?

Actually, more than the engines come from the German marque. Pretty much the whole car, or at least most of what lies beneath the skin is BMW-sourced.

The Supra is a coupe based on the same platform as the BMW Z4 roadster. The engines, eight-speed ZF automatic transmission, front and rear suspension and brakes are pure BMW.  Both are rear drive two-seaters built in Austria by Magna Steyr, a subsidiary of Canada’s Magna International.

Toyota entered into a similar arrangement with Subaru to develop and produce its other sports car, the GR86, alongside the Subaru BRZ.

Aside from the fact one has a top and the other does not, the Z4 and Supra are distinctly different.

The Supra’s voluptuous styling features a long hood and all but missing rear deck. There are vents everywhere – hood, doors, beneath both head and tail lights! But none are functional, they are there for looks only.

The swoopy design has two major drawbacks: it’s hard to get in and out, and once inside, visibility is pretty awful to the rear and through the tapered side windows.

But, once underway it’s pretty easy to forget about such mundane issues, and the fact it is only partially a Toyota. Entry/exit issues and genetics be damned – this is a hellacious sports car. Light, nimble and uber responsive, it is a driver’s car.

The steering is nicely weighed and quick, the brakes strong and progressive. With perfect 50/50 weight distribution, the 2.0 turn-in is immediate. Body roll is all but absent.

The tester had the turbocharged four found in various BMWs and Minis. It was responsive with enough low-end grunt to scrabble to 100 km/hr in about five seconds.

The downside of such impressive alacrity is a somewhat brittle ride over less than perfect surfaces.

The interior is driver-focused and tight.

The double bubbles on the roof are supposed to provide extra room for a helmet on track days. In reality, they are needed to provide ample headroom for average-sized adults.

There is no rear seat but pretty decent cargo space beneath the large rear hatch. BMW owners will be familiar with the controls, steering wheel, shift lever and infotainment system.

Oodles of style, a fun-to-drive personality, and it speaks German!