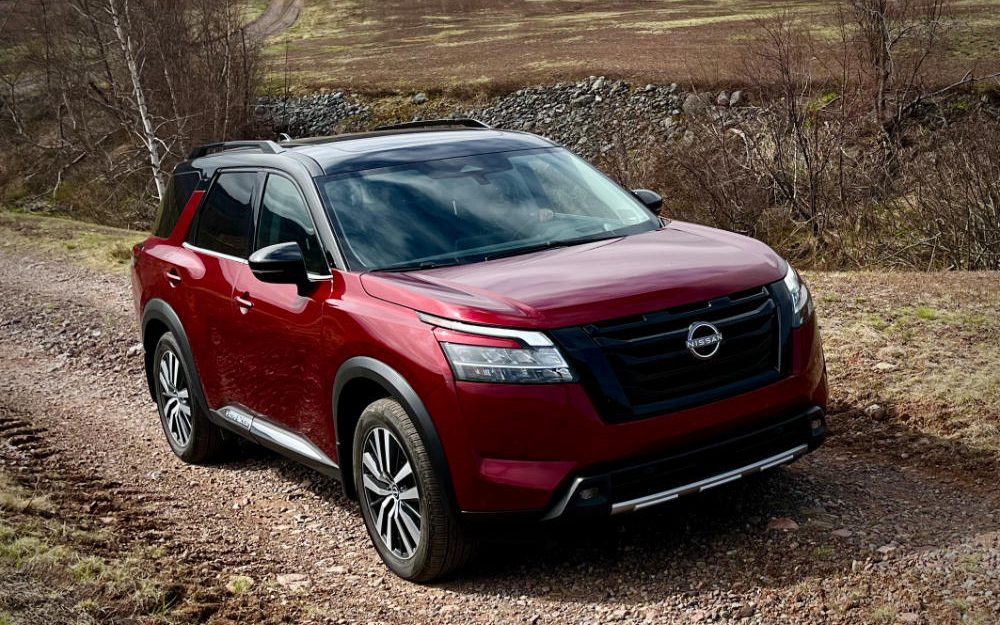 Mid-size, three-row crossovers are hot. All the major manufacturers have an entry, some more than one, as they slug it out for a piece of the pie.

Nissan, however, has not had a player in this game for a couple of years. The Pathfinder had fallen so far behind the competition, the company withdrew it for the 2021 model year.

The Pathfinder is back for 2022, and it is obvious the company took the time to ensure it meets the current needs and wants of consumers.

After a total redesign, the fifth-generation Pathfinder has a new more rugged look, a new drivetrain, more technology and a full house of safety features. It is available in five trim levels from $44,338 to $55,000 offering seating for seven or eight. All have class-leading interior space, all-wheel-drive, and the ability to tow up to 6,000 pounds, another class-topping feature.

The test vehicle was a top-of-the line Platinum version complete with 20-inch alloy wheels, and a 12-way powered driver’s seat among an extensive list of standard features.

The new exterior is burly and truck-like.

Step inside and you are greeted by a family-friendly layout, perfect for those trying to avoid a minivan. The front seats benefit from Nissan’s Zero Gravity program, making them among the most supportive and comfortable in the industry.

The second-row captain’s chairs of the test vehicle (new for 2022) flanked a moveable console with cupholders, and USB outlets. Third row occupants also get USB ports.

At this trim level, the new Pathfinder boasts six USB ports (type-A and type-C), and three 12-volt outlets. The third-row seats are split 60/40 and fold flat when not in use.

The infotainment system utilizes a 23-cm infotainment screen with redundant buttons for major controls below. The system runs the latest version of NissanConnect software. Android Auto and Apple CarPlay are both standard but only CarPlay can be synched wirelessly. An onboard Wi-Fi hot spot, and a wireless smartphone charging pad appear on upper trim levels.

The driver has the benefit of a Heads-Up-Display (HUD).

Storage is a major feature, essential in such a family-oriented vehicle. From a space in the dash in front of the front-seat passenger, and a large bin beneath the centre console to space below the cargo floor, there are storage cubbies throughout the cabin. That family-focus is evident in the way the second-row seats tilt and slide forward allowing access to the third row with a child seat installed.

The instrument panel displays a small warning if anyone forgets to buckle up.

The new Pathfinder leads the class in terms of cargo space. With both second and third row seats folded down there is room for a 4 X 8 sheet of building material!

Power, and plenty of it in the 2022 Nissan Pathfinder

The new 4WD system benefits from updates hardware. The driver is presented with a seven-position drive and terrain selector.

Safety is top of mind for the 2022 Nissan Pathfinder

Safety is another feature of special interest to parents. Here, the Pathfinder once again meets that expectation. Nissan’s Safety Shield 360 is standard on all models. It brings forward collision warning, blind spot and lane intervention. The latter gently applies slight braking pressure if the vehicle strays from the lane without a signal being activated.

Nissan’s ProPilot Assist incorporates lane centering and adaptive cruise control to maintain position within a lane, and behind a vehicle in front. The intent is to take the work out of highway driving. But I found it unnecessarily invasive, and shut it off. It probably works reasonably well on long straight multi-lane freeways, but I found myself constantly fighting for control on secondary roads.

The ride quality is pleasant, absorbing major and minor road blemishes with ease. The Pathfinder will never be credited with sportscar-like handling however. The body leans at the first sign of enthusiastic driving and understeer sets in early. The development team did an exemplary job of masking noise, whether from road or wind.

The 2022 Nissan Pathfinder is a significant improvement over the previous version. It excels in terms of space and boasts upgrades across the board from looks and technology to performance and safety.