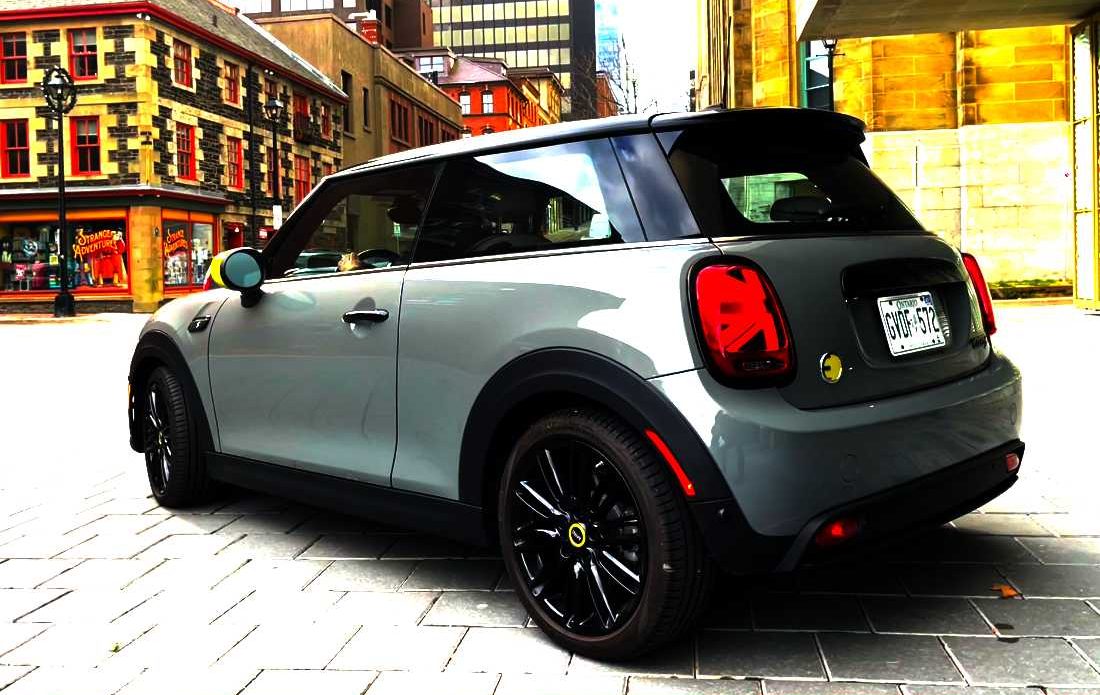 The Mini started out as an urban car, a tiny little box perfectly suited to life in one of the world’s largest cities – London, England. In the early sixties, the front wheel drive layout was unique and would be followed by generations of cars around the world.

The Mini has grown significantly since coming under the BMW umbrella in 2001.

Since that original two-door version, three and five door models as well as a convertible have appeared. All are significantly larger than the original Mini, which had no chance whatsoever of passing emerging crash and other safety tests.

In some ways, the appearance of the 2022 Mini S E takes the brand back to those original roots – a sub-compact car designed specifically for the urban lifestyle.

The Mini SE is a purely electric car with an admittedly small range, perfect for city life.

Appearance-wise it shares much of the makeover given the full range of 2022 Mini cars with a new front end, new rear apron and upgraded interior.

Yellow accents can be found all around the S E, inside and out. “Energetic Yellow” is meant to “point to the electric character of the MINI Cooper S E”.

The difference starts at the front because there is no grill. None is needed since there are no fluids to heat or cool. No oil or water. Instead of a grill and radiator, there is a narrow grey slot between the new LED headlights. At the other end, the taillights now incorporate the Union Jack, and of course there are no exhaust outlets.

The Mini Cooper S E has a very limited range. But the torque!

Since it is based on the production Mini Cooper hardtop, there was not enough room for the large battery pack necessary for a competitive range. The flip side is that the smaller battery, positioned down low in the vehicle rewards with a low centre of gravity and the go-kart like agility the Mini is famous for.

The 32.6 kWh battery pack powers a single electric motor that sends up to 181 horsepower and 199 lb.ft. of torque to the front wheels.

Torque is the important factor – horsepower is only a number arrived through a calculation based on torque. In electric motors, every ounce of torque is available instantly. This allows the Mini SE to scoot away from rest with a zeal that is only possible with a much larger and more powerful gasoline engine. Acceleration from rest to 100 km/hr takes about 7.5 seconds.

But don’t get carried away. Sampling all available power considerably shortens the already minimal range. Fully charged and driven reasonably, you can go about 150 km before needing to find a plug or charging station. Hills, passing, high sustained speeds and really cold weather will have you searching for a charge much sooner.

The two-mode regenerative braking system lets you choose between coasting to a stop in a conventional manner, or maximizing the regen process whereby heat generated during braking is converted to energy for the battery pack.

Pull your foot off the accelerator and the Mini S E slows dramatically. After you become accustomed to it, this allows you to drive without hardly ever having to use the brake pedal.

This offers some recharging when used during stop-and-go city driving but you will need to find a plug to ‘fill ‘er up’.

If that plug is connected to a standard 120-volt household outlet it will take more than a day – 26 hours – to go from drained to 80% charged. A Level 3 charger cuts that to 35 minutes. These are becoming increasingly available around the region or you can have a Level 2 charging station installed in your home, which allows a 0-80% charge in about four hours.

You can monitor the charging progress on the 14-centimetre instrument panel. The display indicates per cent of charge, available range and time remaining to reach a full charge.

The Mini S E is $5,000 to $10,000 more expensive than similarly-sized battery electric vehicles like the Chevrolet Bolt EV and Nissan Leaf. It also has only half the range. It compares favourably price-wise with the Hyundai Ioniq and Kona and the Kia Niro, all of which offer at least 100 and as much as 250 kilometres (Kona) greater range.

All battery electric vehicles qualify for up to $5,000 in Federal and $3,000 in Provincial (NS) rebates.

But let’s be honest. Those shopping for a Mini are not likely cross-shopping in Chevrolet, Hyundai, Kia or Nissan stores. The cache of a Mini is that of a near-luxury brand. It also offers a near unlimited number of customizing choices, allowing owners to personalize their Mini.

On the practical front, space is limited in the rear seat and trunk.

The standard equipment list includes a heated steering wheel and front seats, dual zone automatic climate control, and 22-centimetre display incorporated within the traditional Mini round centre display. This is where Apple CarPlay, navigation and the infotainment controls are found. A Smartphone app lets you heat or cool the S E remotely.

To ease the load on the battery system, the Mini S E has a heat pump that uses 75% less electricity than a conventional heater.

Electric vehicles are most efficient in urban driving. The Mini Cooper S E is well-suited to the role of commuter car.