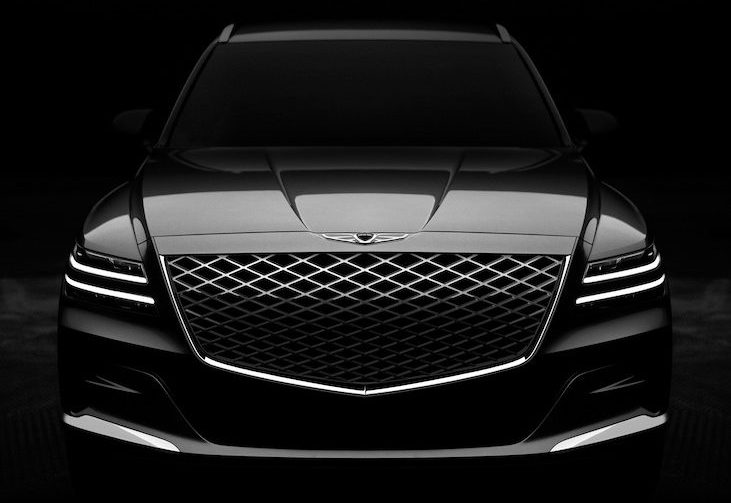 Tested: 2021 Genesis GV80 will be a formidable competitor

Lisa Calvi predicts the handsome 2021 Genesis GV80, the first SUV from the luxury automaker, will give competitors a run for their money.

Ensconced in the luxurious second row, I felt like I was hiding.

When the door closed with a reassuring muffled thud, a soothing calm enveloped me. My legs stretched out in front of me, I reclined my diamond-quilted leather seat.

Suddenly I was a rock star, making my escape from a concert, evading the crush of adoring fans.

In reality, the vehicle wrapping me in contentment was in the Genesis showroom at Sunnyside Mall in Bedford. There was no smartly dressed chauffeur behind the wheel waiting to whisk me off to my next gig. I could dream though, right? 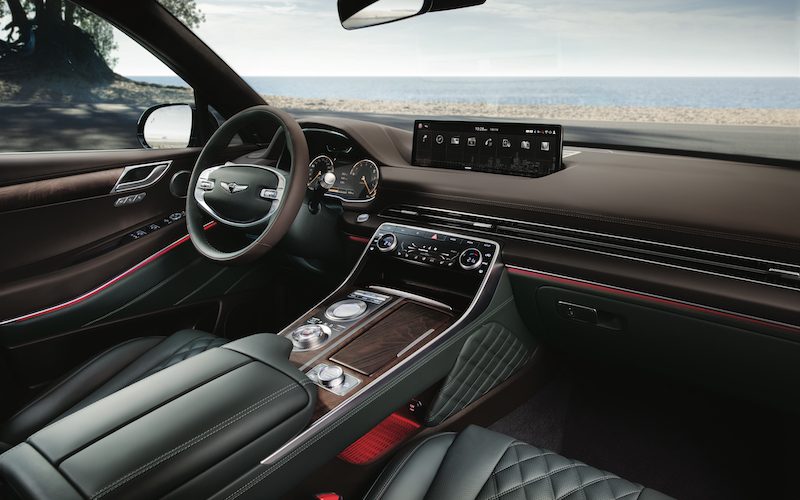 The second row provided a perfect vantage point for surveying the front cabin of the first SUV by the world’s newest automotive brand, the 2021 Genesis GV80.

Since the 2015 debut of the luxury division of Korean automaker, Hyundai, Genesis has certainly grabbed the world’s attention.

With its first SUV, the GV80, Genesis, the luxury division of Hyundai, sets its sights on upscale marques like BMW, Cadillac and Mercedes-Benz

Genesis now has three sedan models in its lineup. It was only a matter of time before the upscale marque introduced an SUV.

The GV80 is going after upmarket models like Lincoln’s Aviator, Cadillac’s XT6, the RX 350L from Lexus and, of course, heavy hitters in the segment, BMW and Mercedes-Benz.

Inside, the Genesis GV80 in Prestige trim ticks all the boxes. 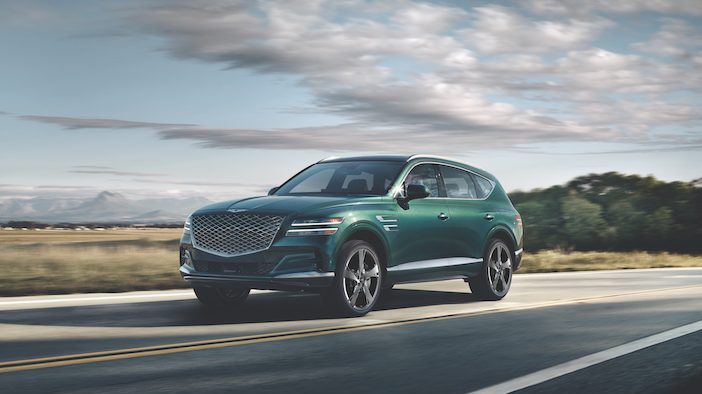 Its understated elegance follows the philosophy of ‘less is more’. The front cabin, from the two-toned leather-wrapped steering wheel to the minimalist centre console, is sleek with not much clutter.

A sense of spaciousness comes from the horizontal air vents that run the length of the dash.

The 14.5-inch infotainment screen is a touch screen but can also be controlled by buttons and knobs on the centre stack. A circular touchpad, in a chic white, recognizes handwriting, offering a third option of control. The information displayed on the screen can be customized to the individual driver.

The 3.5T Prestige version I was hiding in includes a 12.3-inch digital gauge cluster that detects the driver’s line of sight and generates a 3D image, a global, industry-first in a production vehicle.

The ambient lighting, in a variety of colours, adds a funky touch.

I wasn’t actually hiding in the second row.

Genesis wants to elevate the experience of the second- and third-row passengers, so I thought I should see and feel for myself. The full coverage sunshades on the rear passenger windows are adjustable, the seats recline and can be either heated or ventilated.

Third row is fine in terms of space but perhaps more suited to the smaller passenger on a short road trip.

From my second-row rock-n-roll perch, I can control the front passenger seat for more legroom. Forward, James.

If I want to rock out, there’s a 21-speaker Lexicon sound system. The speaker grilles are fancy, laser-cut jewels that blend beautifully with the whispers of wood throughout the cabin.

If the rock concert where I headlined is still ringing in my ears, I can sit in sumptuous silence, thanks to an active road noise cancellation system, a world-first, according to Genesis.

The system analyzes incoming road noise then sends an inverted sound wave through the vehicle’s audio system, cancelling out the offending din. There’s even a selection of nature sounds available in the audio system, like waves at the seaside or a crackling fire.

I guess it’s time to leave my cocoon and have a look at the GV80 on the outside. Plus, the Genesis reps are starting to look at me funny. 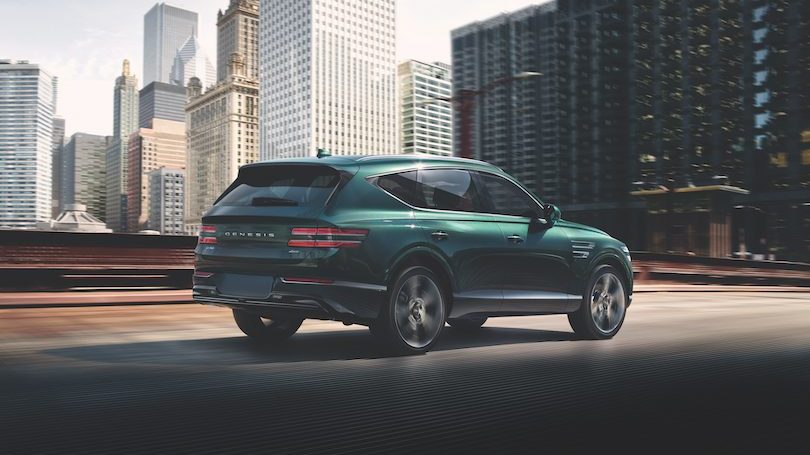 The model on display at Genesis in Bedford is the 3.5T Prestige, the top trim. It’s in a beautiful, quite unique Cardiff Green.

To move the GV80 down the road, the standard engine is a 300-horsepower 2.5-litre turbocharged four-cylinder mated to an eight-speed automatic transmission. Available is the 3.5-litre twin-turbocharged V6 that makes 375 horsepower.

Actually evaluating the vehicle’s road manners will have to wait as we couldn’t drive this pre-production model.

The striking rear-wheel drive G80 sedan, also on display, is where the GV80 gets its platform. The SUV is not a Hyundai Palisade in a party dress, as many had assumed it would be. The GV80 is all-wheel drive with the option to select various driving modes depending on weather, road and terrain conditions.

The first thing I notice is the gargantuan grille. The slick bisected LED headlights or Quad Lamps, as Genesis calls them, are the first rendition of the brand’s new design language. The two parallel lines actually carry down the side of the sophisticated SUV and wrap into the taillights. 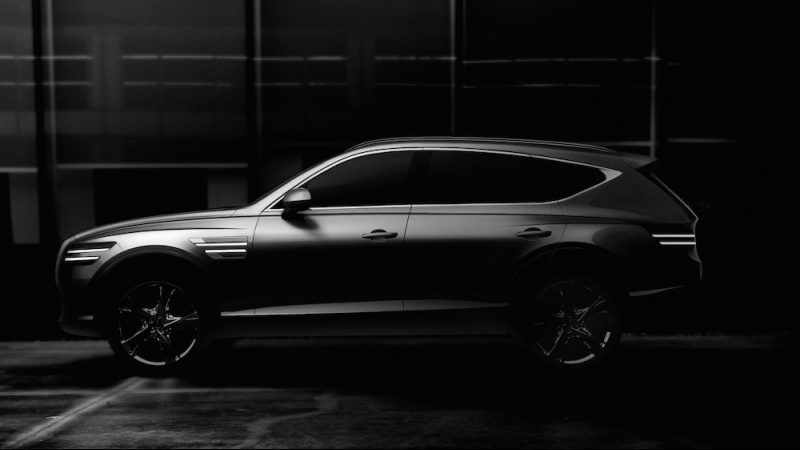 It’s a stylish effect that translates well in both the SUV and the sedan.

The handsome, aggressive-looking vehicle stands out in a crowded segment. Distinctive, with a dash of Bentley.

It looks expensive. But, here’s the beauty, it’s not.

The Genesis GV80 starts at $64,500 and, depending on trim and engine choices, reaches a top price of $85,000. It’s an affordable alternative to its competitors.

Its level of luxury and refinement make it a formidable player in this segment.

*For more information on the Genesis GV80, please click here.