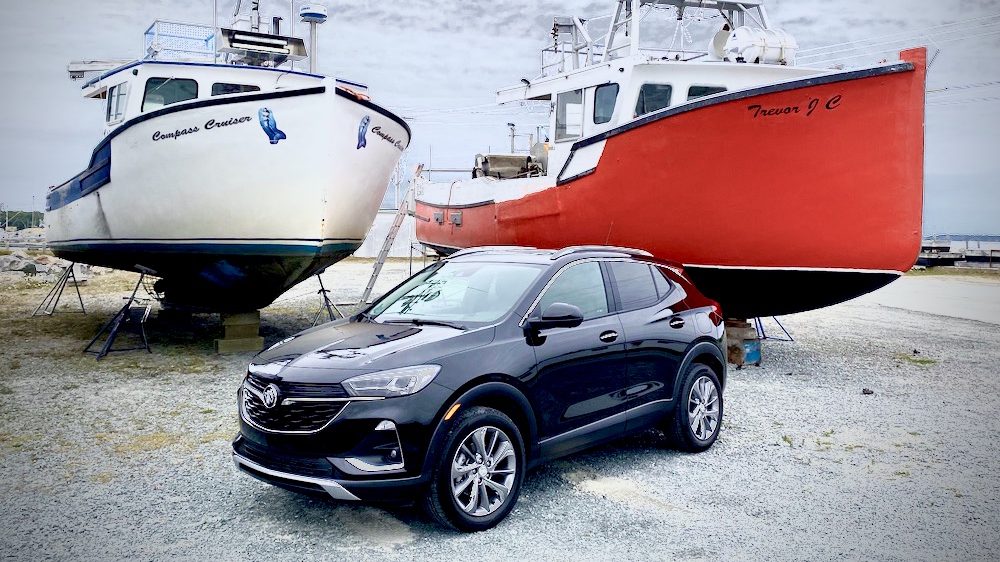 Buick, once known for its sedans, is now heavily vested in crossovers. The only car remaining in the Buick lineup is the Regal Sportback. But even that may be history – Buick’s current Canadian website shows only the crossovers, no cars!

The latest addition to the lineup, new for 2020, is the Encore GX.

It slides into the lineup between the Encore and Envision. There are thus two Buick Encores. Confused? Join the crowd. The Encore is a five-passenger compact crossover with a turbocharged 1.4-litre four-cylinder engine.

The Encore GX is a five-passenger compact crossover with a turbocharged 1.3-litre three-cylinder engine. Did that clear things up? Probably not.

Let’s just say the 2020 Encore GX is newer, slightly larger and has a smaller, yet more powerful engine.

The GX has 41 millimetres more space between the front and rear wheels, is 77 millimetres longer and weighs nine kilograms more than the Encore. Its smaller engine produces 20% more horsepower and 18% more torque. It uses less fuel in the city – but more on the highway.

There’s not a lot to choose between them – slightly more rear leg room (seven millimetres), 41 litres more cargo space behind the rear seat (914 litres versus 907) and 1,422 litres of total available cargo space versus 1,371 for the older Encore.

Both come with all-wheel-drive but the GX has three more gears packed into its automatic transmission (nine), and $1,500 more on the price tag when comparably equipped.

So here we have a three-cylinder Buick.

That is a long way from the Buick barges of old – remember the Electra 225 or the Roadmaster wagon? The Encore GX could be parked on the hood of those big old boats! 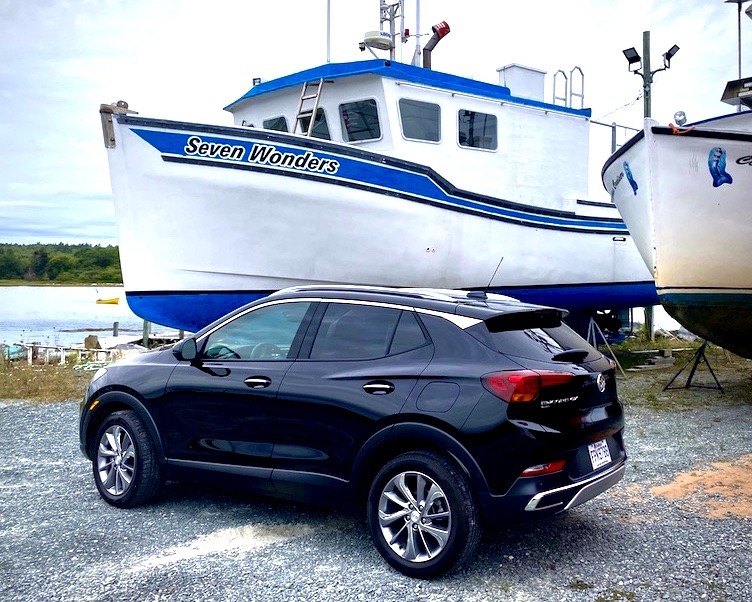 The Encore GX is Buick’s answer to the current trend as consumers gravitate to crossovers.

Buick sees the GX as a competitor in the entry-luxury class against the likes of Audi A3, BMW X1, Lexus UX, etc. At nearly $40,000 as tested here, it does slot in there. But I see it more likely to be cross-shopped with a raft of mainstream competitors from Honda, Kia, Mazda, Hyundai and Toyota.

In both cases, the three-cylinder engine is at a disadvantage. Threes are popular in China where regulations favour them.

Buick sells more vehicles in that market than in North America so that is probably why the new Encore GX comes with one. But, the competition has four-cylinder engines. You’d expect fuel economy to be the GX’s strength. But it does not enjoy a clear edge here either. I averaged 8.9 litres/100 km for the week of mixed city and highway driving – about average for this mostly four-cylinder class.

The triple does not lack power or performance. The turbo does a good job of making up for the missing cylinder. The little three-pot emits an angry growl under full or near full throttle and the Encore GX scoots up top speed with alacrity. 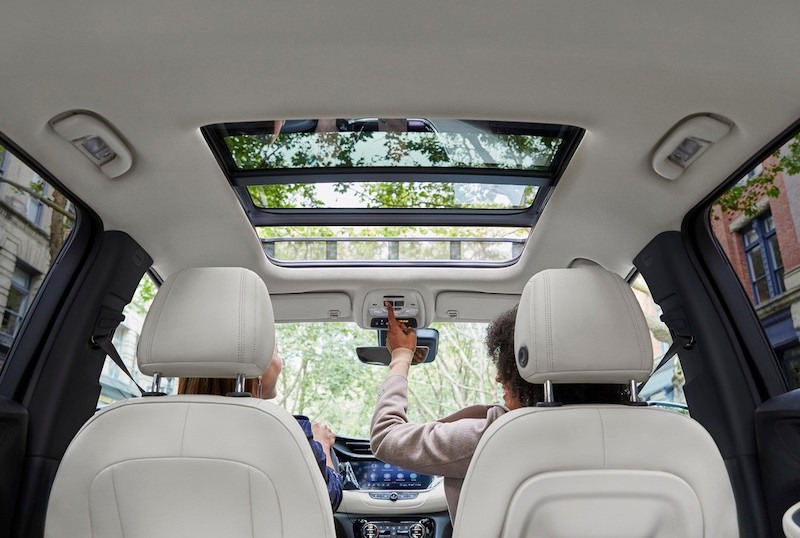 I don’t recommend you take it to your nearest dragstrip looking for a win light and it might cause you to hold your breath when passing uphill at highway speeds with people or cargo aboard. But it won’t embarrass you in the city, either.

The all-wheel-drive system is part-time. The downside is you need to press a button to engage the second axle. The upside is that for the other 99% of the time, you save a bit at the pump.

The ride over poor surfaces could best be described as busy. But on the rare section of smooth pavement encountered on secondary Maritime roads, it is smooth and composed.

Against the volume players from Asia and North America, the 2020 Buick Encore GX provides a viable alternative

The loaded (Essence trim) tester boasted a raft of nice touches: LED headlights, two-tone leather seats, heated steering wheel and front seats, dual-zone climate control, panoramic sunroof, a hands-free hatch beneath which you’ll find the Buick logo projected onto the ground and a 120-volt outlet at the rear of the centre console.

The rear-view mirror boasts a camera that shows a brilliant view of what lies behind, but it does not work well with progressive lenses from certain angles, so I reverted to the normal mirror.

Fit, finish and material quality were first-rate. There was plenty of room in the front seats for big adults, not so much for those behind. But it is a compact vehicle and Buick offers plenty of others if more room is needed.

The Encore, introduced in 2013 is likely at or near the end of its time with us. The brand-new Encore GX fits well into the current market. Perhaps not against the luxury players, it needs a four-cylinder engine to play there. But against the volume players from Asia and North America, it provides a viable alternative. 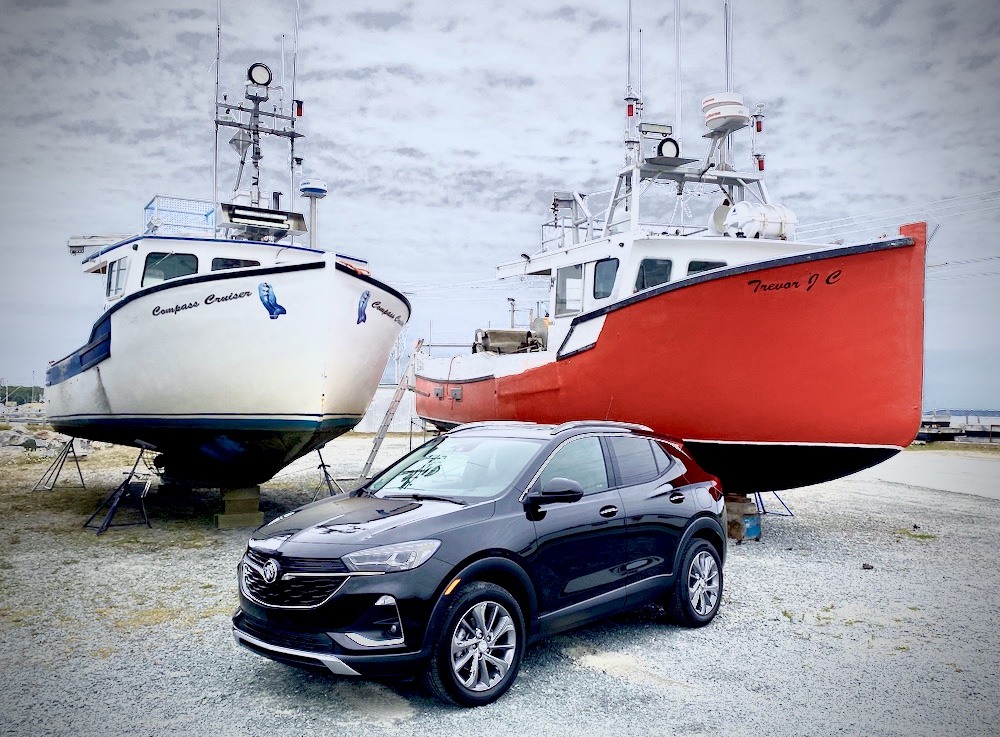