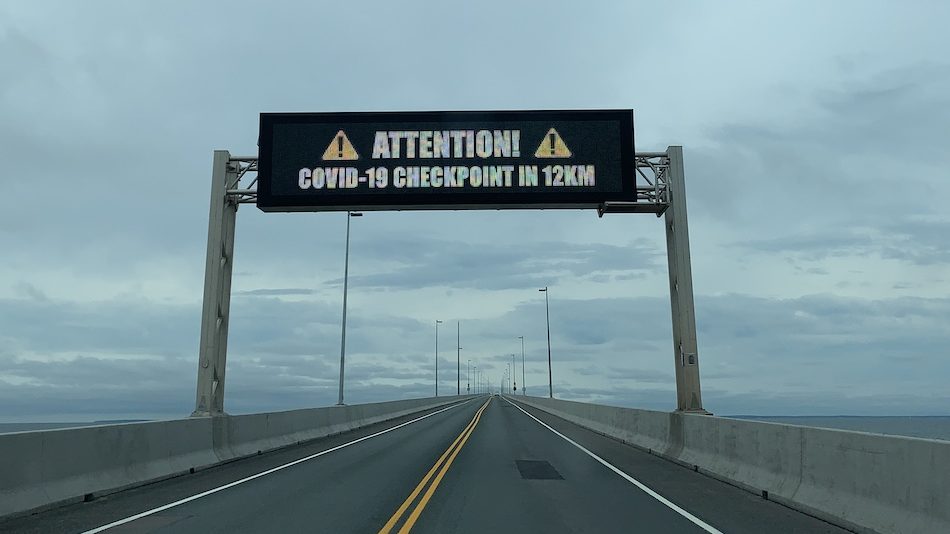 The fabric of Atlantic Canada is stitched together by friendly people, unique culture, and welcoming villages. Plus a few plates of poutine, of course. Like good neighbours, of which there are plenty in Atlantic Canada, the provinces tend to support each other in a variety of ways.

If Nova Scotia and New Brunswick lived next to each other in a subdivision, they’d be constantly borrowing each other’s lawn mower – and returning it full of gas, of course.

That fabric’s been stretched a bit tight over the last few months.

Travel between the provinces has been affected by the global pandemic, meaning folks who crossed the borders had to self-isolate for two weeks after entering another province. This mandate was understandable, especially since it helped tamp down the spread of Covid-19.

Made it tough to ask PEI if we could borrow a cup of sugar, though.

But, as of July 3rd, those who call the Atlantic provinces home are now free to move about Down East. Each province is, for now, permitting residents of the region to traverse their borders.

With a severe lack of road trips in our 2020 calendar, we decided to mask up and take a socially-distant drive to three of the four Atlantic provinces.

Would the border checkpoints turn the trip into something from the Communist Bloc days? Or would there be smiling faces waving potatoes at us as we entered PEI? 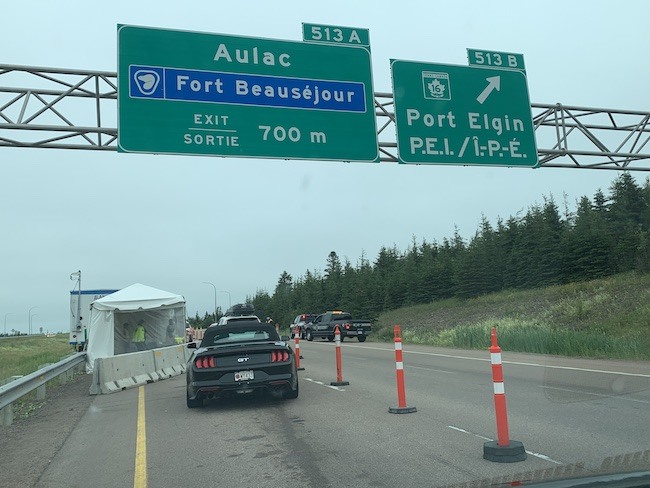 As always, the answer is somewhere in between.

Hitting the road in Nova Scotia was familiar as it always was, with the Cobequid Toll Authority hoovering four dollars from our bank account for the privilege of traversing a foggy highway. It must be said that the pandemic has forced the CTA to *finally* install digital pay machines at their gates, turning the frantic search for coinage into a thing of the past.

New Brunswick’s border was nearly deserted at 8:00am, with only five cars in the lineup at the border checkpoint (it still feels weird to type that in reference to inter-Canadian travel).

A trio of masked and gloved agents were checking driver I.D.’s and license plates against the paper form I had downloaded off the NB government website the night prior. The vast majority of travellers did not have such foresight, requiring to the agents fill out the form by hand. This, as you’d imagine, has the propensity to cause delays if lineups are long.

Route 16 is a straight shot from the NB/NS border to the Confederation Bridge, the $1.3 billion 12.9-kilometre bridge that is Canada’s longest bridge and also the world’s longest bridge over ice-covered water, where we were greeted by overhead gantries bearing ominous-looking warnings.

As a note to the nation’s sign writers, we all know the pandemic should be taken very seriously but surely there is room for a bit of humanity in their wording. 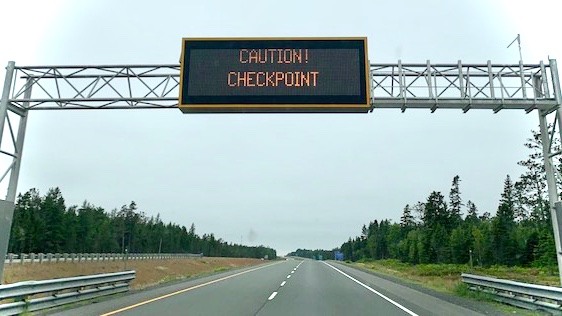 For those who’ve never been, the Fixed Link deposits travellers bound for PEI in a wide parking lot, a partial holdover for the days when a ferry made the 60-ish minute jaunt across the channel.

Border agents had a quintet of lanes available for screening purposes and it’s worth noting that, as of this writing, PEI asks those arriving to the province to complete a mandatory self-declaration form ahead of time, answering questions about your health and the planned length of your stay. This form generates a confirmation number for which the agent asked along with two pieces of government I.D.

My medical card was rejected by this maskless agent, as it had expired a month prior and I had failed to populate my wallet with the new one. This is despite it being accepted at the NB border just thirty minutes prior. A digital pay stub bearing my home address was a sufficient substitute.

A day on PEI was pleasant as always, with socially distanced stops for Handpies and at beautiful antique stores. The island never disappoints, providing endless options for picnics on deserted fields and vehicle photo ops on red dirt roads.

Heading back over the bridge and into New Brunswick later in the day, our vehicle and several others were waved past the entry checkpoint without any scrutiny at all. This was presumably thanks to a lineup which stretched down a service road and into the visitor’s centre, one that was quickly beginning to back up onto the Confederation Bridge itself, something which I’m sure traffic enforcement would like to avoid.

A 1.5-kilometre-long lineup awaited us entering Nova Scotia in the mid-afternoon.

Your author was simply requested by a maskless agent to hold his driver’s license aloft like a trophy salmon snagged fly fishing on one of Atlantic Canada’s beautiful rivers.

So what did we learn during the first weekend of this Atlantic Bubble?

Well, aside from the fact that PEI Handpies remain delicious and beer remains cheaper in New Brunswick and, even though the Atlantic provinces are on their way to a measure of normalcy in these odd times, some planning is still required to traverse the borders.

Our advice is to check regulations at least a day before you plan to travel and pack a good deal of patience along with your overnight bag.

A snack of poutine wouldn’t hurt, either.