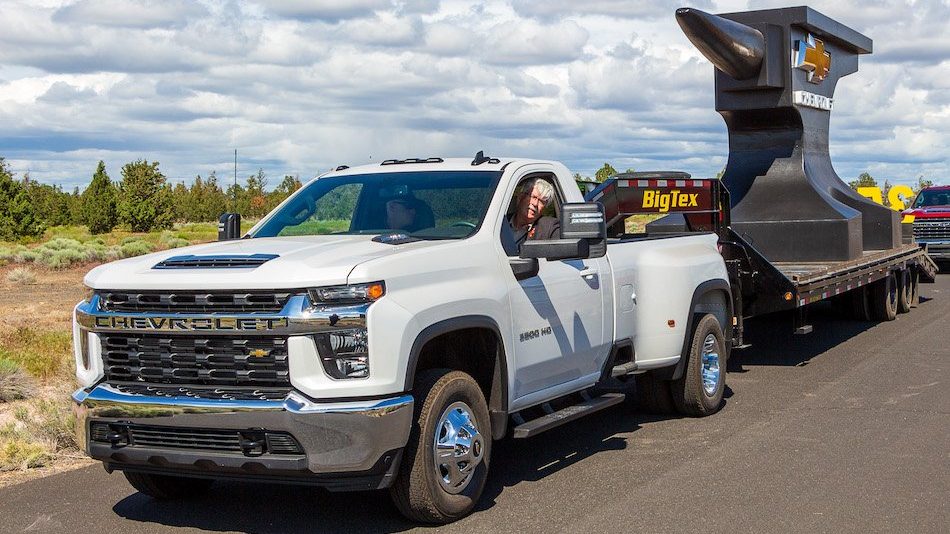 I still remember Take your Kid to Work Day, even though it was the better part of 25 years ago.

Last year, I got the chance to take Dad on a work trip of my own to show him, for one thing, my job writing about cars was real.

I got to sit with Dad as he made his rounds of the local coffee shops and to experience the joy of him visiting people who might not have another visitor all month. Most memorably for young me, I remember speeding through town for him to maybe be the last person someone ever got to speak with.

Many of us see only the home version of our parents, not the people they are from nine to five, six, or whatever time the workday ends. That makes the one day in grade nine both strange and special.

It’s why it was so special for me, last year, when I got the chance to take Dad with me on a work trip of my own, to the high plains of Oregon to check out the all-new Chevrolet Silverado HD and to show Dad: 1) my job writing about cars on the internet was real and 2) what had happened to the pickup truck since the last time he drove one a few decades earlier.

That the trip was for Father’s Day last year doesn’t escape me, thanks to the reminders from my omnipresent smartphone, another bit of technology he’ll not likely ever need to worry about. We started our day before 4 a.m., because as anyone on the East Coast knows, if you want to fly somewhere west, there’s a good chance you’ll be on a zero-dark-thirty flight from Halifax or Moncton or Fredericton or an even smaller hub at an earlier hour. This time, though, I didn’t mind quite as much; I had another surprise in store for Dad.

The thing about work travel is the more you do, the more small comforts the airlines give you to make it just a bit less of a miserable experience. So, instead of sitting at the gate, I was able to treat Dad to a free cup of coffee and a hard-boiled egg, thanks to Air Canada.

There aren’t always chances to let our fathers know what they mean to us, but this may have been one of my best.

In Toronto, we cleared customs and I had an even bigger surprise in store. I’d gotten Dad an upgrade. Instead of the two of us, nearly 13-feet tall combined, squashed into narrow seats for the next six hours, we would be sitting in lay-flat seats and Dad will be drinking free champagne. Because, while it was early, like he always says, the sun’s over the yardarm somewhere.

There aren’t always chances to give back to our parents and let them know what they mean to us, but this may have been one of my best. And from overhearing Dad chat with the Captain and flight attendants, he was enjoying it as much as I was enjoying treating him.

The all-new 3.0L Duramax inline six-cylinder diesel is an impressive bit of hardware. Almost as quiet as any gas-powered car.

Landed and settled in Bend, Oregon it was time to talk trucks. We were in the light-duty new Silverado with the all-new 3.0L Duramax inline-six diesel and this impressive bit of hardware is more silent than the last gas-powered truck Dad had driven. Of course, since that was an early ’90s Ford F-150, and before that a farm-life dump truck from the 1970s (or earlier), that wasn’t not a tough task. As quiet, nearly, as any gas-powered car, until you flatten the throttle. At that point, you’ll get lots of go and a little more diesel clatter.

Plethora of camera views in Chevrolet trucks make hitching and towing a trailer easy, even if you’ve never done it before.

What really impressed him about the current status of the pickup, though, was the plethora of camera views to make towing easy for someone who had never really done it before. Forget the standard rear camera, GM’s trucks now can be had with cameras looking down the side, up front, behind the trailer, directly at the hitch ball, and even inside the trailer. 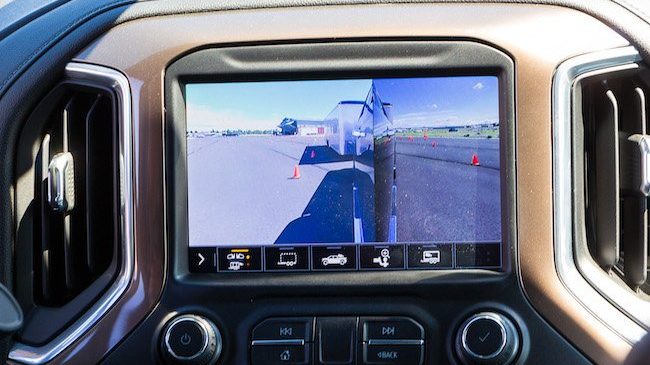 I thought that last view would give him another heart attack when he saw that the car in the trailer he had been dragging around the test track was a brand-new 2020 mid-engine Corvette. Of course, the truck itself had nearly the same price on the sticker, something I didn’t tell him until later. 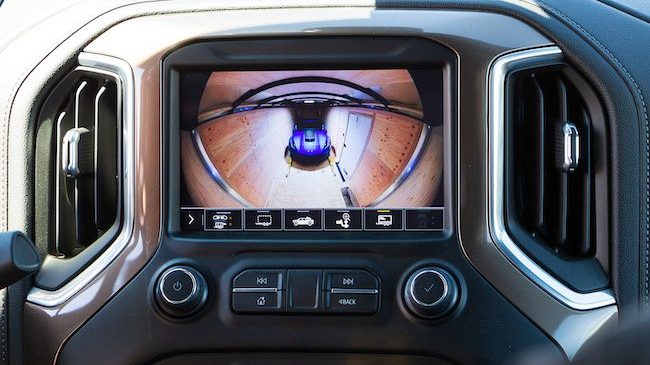 Dad looked pretty happy towing a a 35,-000-pound anvil behind a Chevy Silverado HD down an empty taxiway.

At dinner, Dad was his usual self, making fast-friends almost immediately with some of the journalists who were my heroes growing up reading about cars. But that’s just the way he is, we can’t go anywhere without him bumping into someone he knows. And if he doesn’t know someone there, he will soon. It’s one of those skills I’ve always envied, though I don’t think Mom was always as amused. 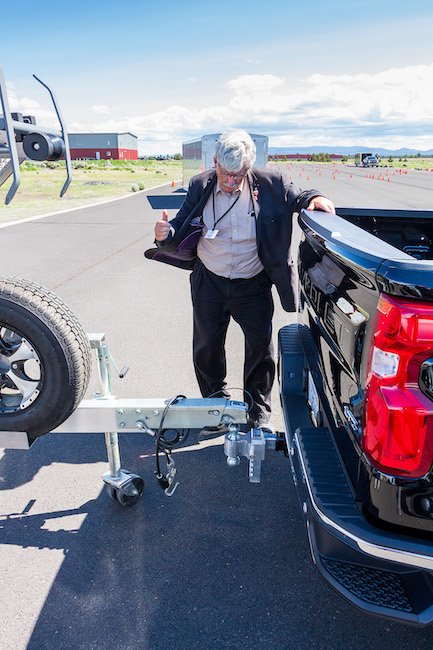 Watching Dad back up to a boat trailer hitch on the first try was one of the highlights of my year. I know that sounds silly but Dad had never really been much of a car guy, with highlights in his automotive history like a pair of 1990s Buick Century sedans, a 1st-gen Nissan Micra, and a green Ford wagon in the 1970s that happened to bear a striking resemblance to the local moonshiner’s (bet his was faster, though). Seeing his enthusiasm for cool new gadgets and technology, like the camera view that showed him exactly how to line up ball and trailer, made me confident that I won’t lose my own awe for new things. That he had never reversed to a trailer before (only being the back, back, back, stop! assistant) made it all even more impressive.

Up next was driving a 35,000-pound anvil behind an HD version of the Silverado. He looked pretty happy taking that one down an empty taxiway.

The next day was more relaxing, for him at least. I had a long day of high-altitude driving and photography, while he got to lounge in the desert. We were both exhausted, me because the dry air came with Dad’s legendary snoring, the bane of family road trips, him because multiple 20-hour days and long flights are a younger man’s game; not exactly helped by the crush of passengers at the Air Canada gates at Boston’s Logan airport (another common spot for Maritimers headed west or back east). 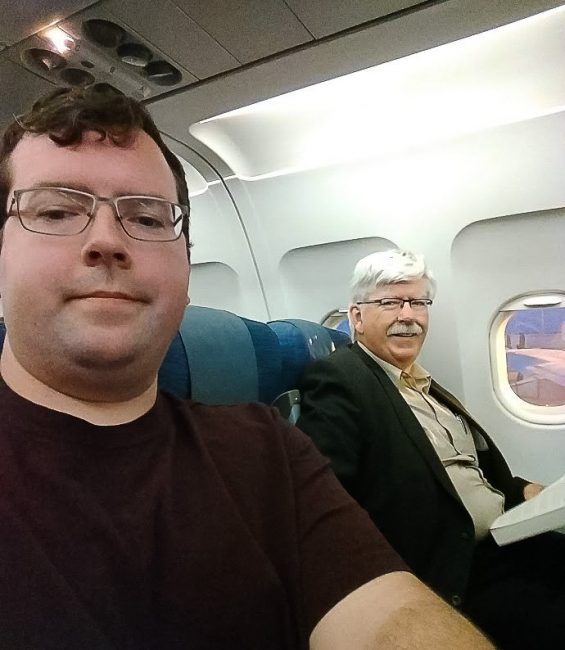 Unlike my usual exhaustion that followed a quick turnaround trip to bring the details of the latest and greatest new vehicle to the world, this time I was happy. I wished it could go on for just a while longer, spending time with Dad, even if it was in a tiny metal tube.

Maybe this test was on the West Coast, not the East, but Dad’s been a Maritimer for more than 40 years and he (plus mom, of course) are the reason I’m an East Coast Tester today.