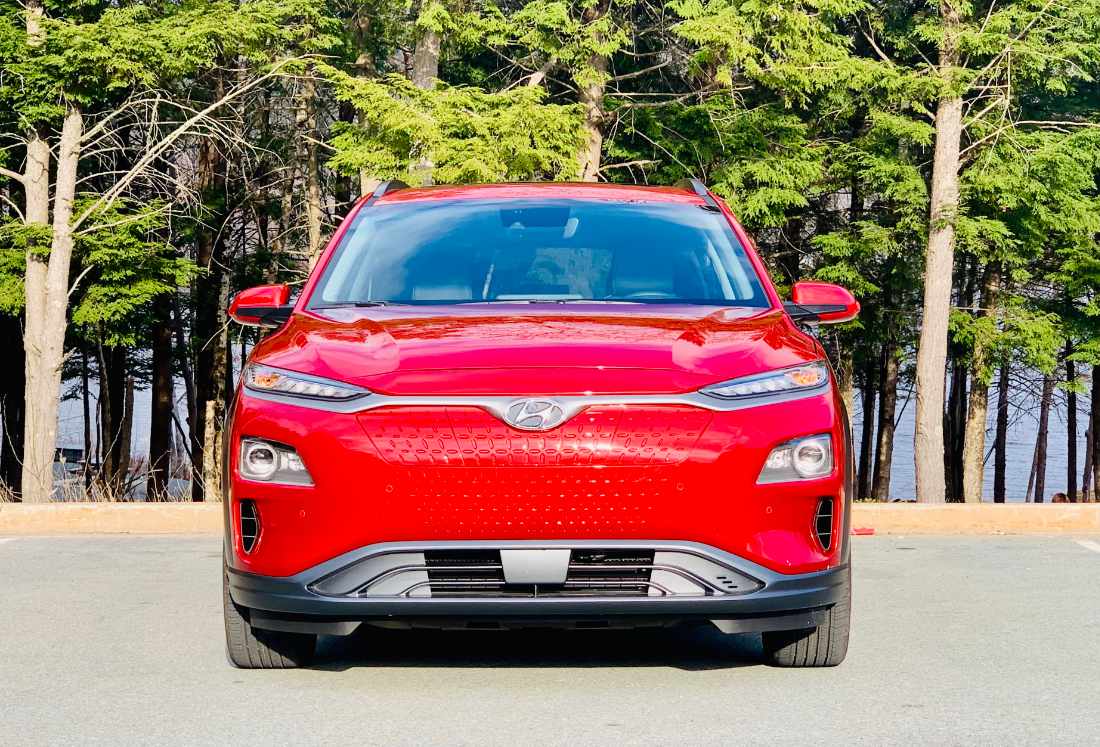 I have driven perhaps a dozen or so pure electric vehicles in the last few years as they have been brought to market. Until now, all of that experience has been for a few hours with each vehicle.

I’ve now spent an entire week with the 2021 Hyundai Kona electric, at home. After testing thousands of cars, trucks, crossovers and SUVs over the four decades, this was one of the most memorable experiences with a new vehicle.

But we are still burning fossil fuel, creating harmful emissions and contributing to global warming.

Let me make something perfectly clear. I love internal combustion engines! Nothing gives me more pleasure behind the wheel, than winding an IC engine through the gears, transforming all that combination of fuel and air into power that I can feel and hear.

But, I do not have my head buried in the lovely white sand of a south shore beach. The age of internal combustion engines as the sole source of automotive power is drawing to a close.

IC engines will be around for a couple of decades more. Engineers and scientists will find ways to squeeze even more power from them while using less fuel. But the writing is on the wall.

The transformation to alternative power sources began with hybrids, followed by plug-in hybrids and most recently – battery electric vehicles.

Electric motors as a replacement for gasoline engines are becoming increasingly available as manufacturers improve on range and the charging infrastructure expands.

The chief drawback from the outset continues to be the need to plug them in.

For an entire society accustomed to a gas station on every block or within a 20- or 30-minute drive, the need to know where charging facilities are and to plan ahead is a new, and not necessarily pleasant, experience.

But, burning fossil fuels is harmful for the environment and those who live within it. This will surely result in change going forward and the need to adapt. Whether it be battery electric, hydrogen or other alternatives, change is inevitable.

The first lesson, as I learned with my week with the Kona electric, is the need for a refuelling/filling /charging system at home. 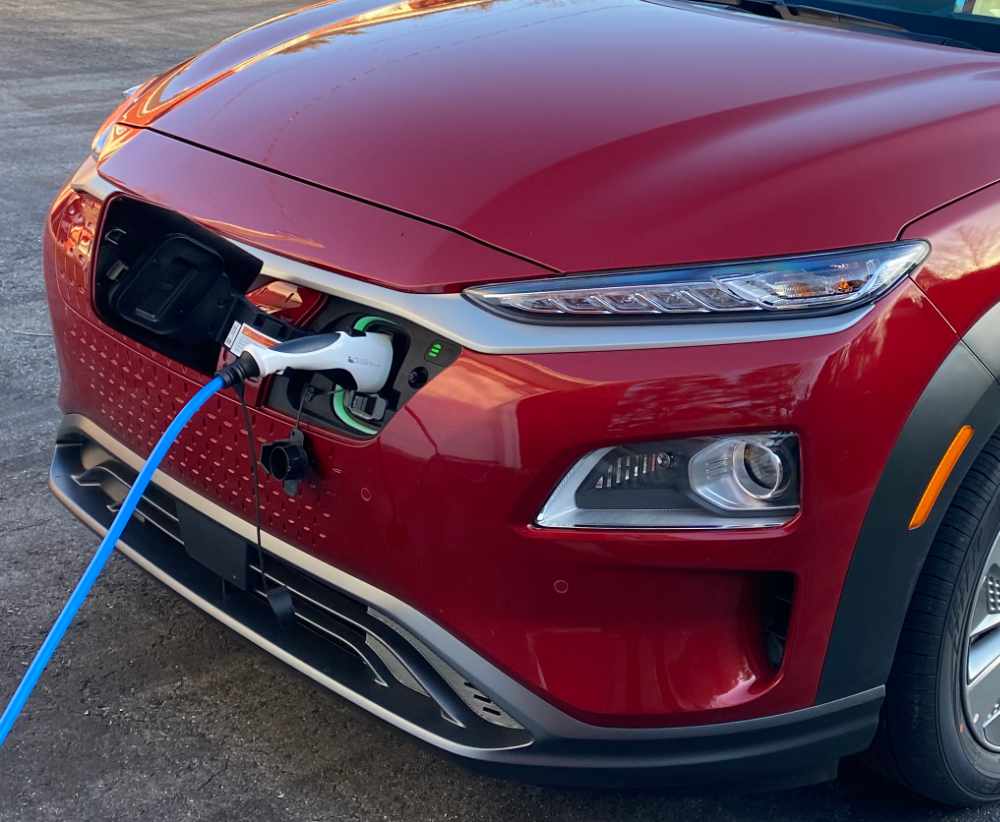 I had driven a pre-production Kona electric two years ago, and said at the time it was a very acceptable little crossover. It had style, content, performance and all of the attributes that make small crossovers so popular. I spent two or three hours at the wheel and came away impressed.

The 2021 Hyundai Kona electric looks much like its internal combustion counterpart, but with no open grille

After driving a 2021 Hyundai Kona electric, for a week, those impressions remain intact. It looks like a stylish, yet conventional sub-compact crossover. The first hint it is different, is that is has no grille – or need for one.

Instead of an engine that burns fuel, creating heat and requiring an extensive cooling system, beneath this hood rests a permanent-magnet synchronous 150 kW AC electric motor paired with a 64 kWh lithium-ion polymer battery located beneath the floor.

Power, a full 201 horsepower and, more important, 294 lb. ft. of torque, is sent to the front wheels through a single speed direct drive system. No transmission is necessary to multiply torque through a series of gears.

Electric motors produce maximum power from rest. Among the first things you will learn when driving a battery electric vehicle is that they are extremely powerful when starting off.

The first couple of times I stepped into the throttle (no gas pedal here) the front tires scrabbled for grip, activating the traction control system, and squealed like mad.

OK, the Kona EV has lots of power – at all speeds.

It is also extremely quiet. The lack of engine or powertrain noise makes road and wind noise more noticeable. But even that has been well quelled.

There are paddles on either side of the steering wheel to control the amount of regenerative braking available. Regen braking captures the energy/heat created by the brakes, converts that into energy and sends it to the big main battery.

It’s fun utilizing the system to slow the vehicle while charging the battery. Drive smoothly, plan ahead and you almost never have to actually touch the brake pedal.

The instrumentation is similar to a conventional one – except for the lack of coolant temperature and engine speeds gauges. Instead, there are numerous readouts for battery strength, distance remaining and charging information. 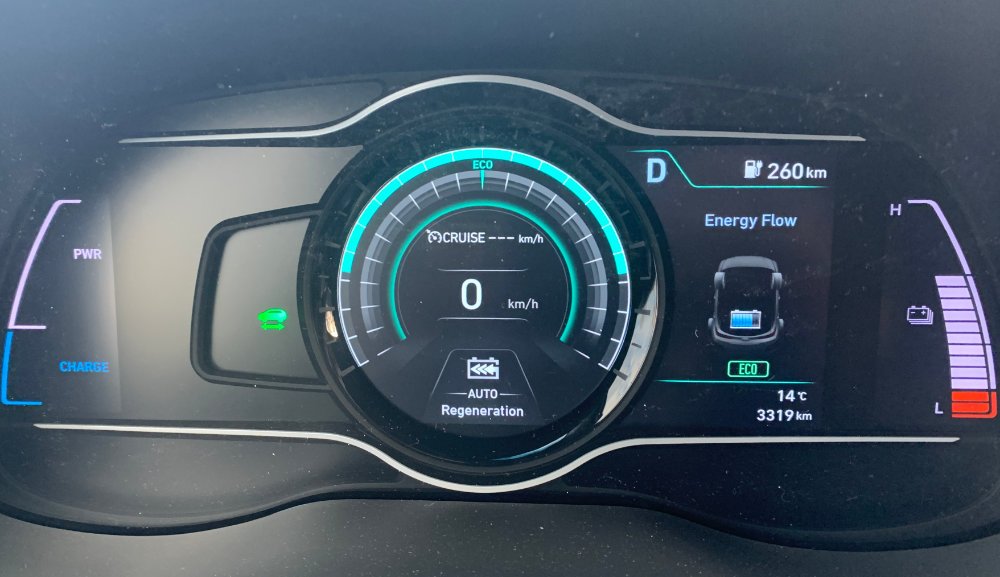 Therein lies the big lesson. I have tested and reported on numerous hybrid and plug-in hybrid vehicles. The latter simply required plugging in overnight. Granted, they didn’t travel very far on battery power alone – 20 – 50 km. And when the battery became depleted the gasoline engine took over. Total range 500-1,000 km.

With no secondary source of motivation, when the available range depletes, you have plug it in. But where?

The Kona electric, like every other pure electric vehicle, has no gasoline engine as a primary or secondary source of motivation.

When the available range starts to dwindle, you have to think about plugging it in – and where to do so. 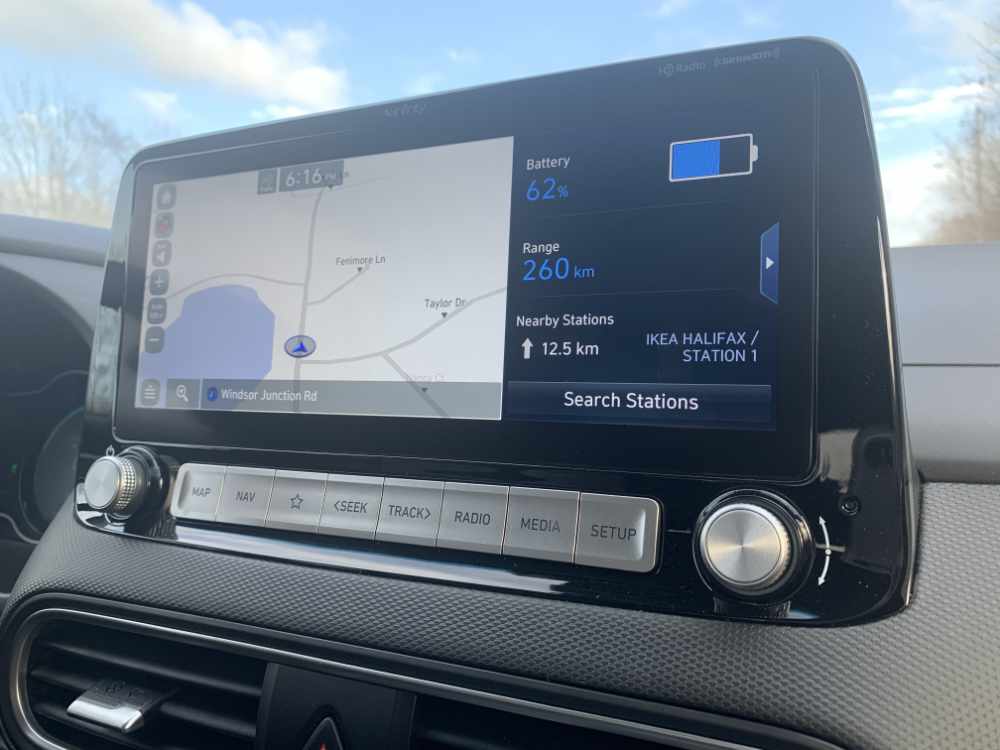 I saw the low battery warning as I pulled into my driveway late in the afternoon of the first day. No problem, I plugged it into the 120-volt outlet in the garage and called it a day. That evening I learned that I needed to go to the city the following afternoon, a 125-km drive.

When I checked the state of charge around noon the following day, I discovered it had barely reached a charge of 20% after all that time plugged into a 120-volt outlet, not sufficient range for the drive to the city!

Thankfully, in the nearby town there were two public charging stations.

I chose one supported by the Nova Scotia Power Corporation with Level 2 and Level 3 outlets. I signed up for the Flo app, deposited $25 on the account through my credit card, and plugged in the Level 3 charger.

Thirty-nine minutes and $9.35 later the little Kona was 80% charged and had plenty of range for the trip – at least one way.

To make sure there was plenty of juice left to return home, I sought out a related charging station in the city and, after waiting for a fellow electric vehicle user to complete his charge, was able to plug in, make use of my Kindle reader while waiting, and ‘filled it up’.

A fully charged Hyundai Kona electric will go up to 375 km before needing a charge.

Lesson #1 – Electric vehicles require electricity and a change in habits. Have a Level 2 station installed at home and/or know where one is near home or place of work.

In addition to an eery silence, and an abundance of smooth, consistent power, the Kona EV is a practical and well thought-out little ute. Fun to drive, it boasts excellent handling, a full slate of safety and technical features.

If your daily commute is less than a 200-300 kilometres and you have access to a Level 2 charger, you could throw away that company gas card.