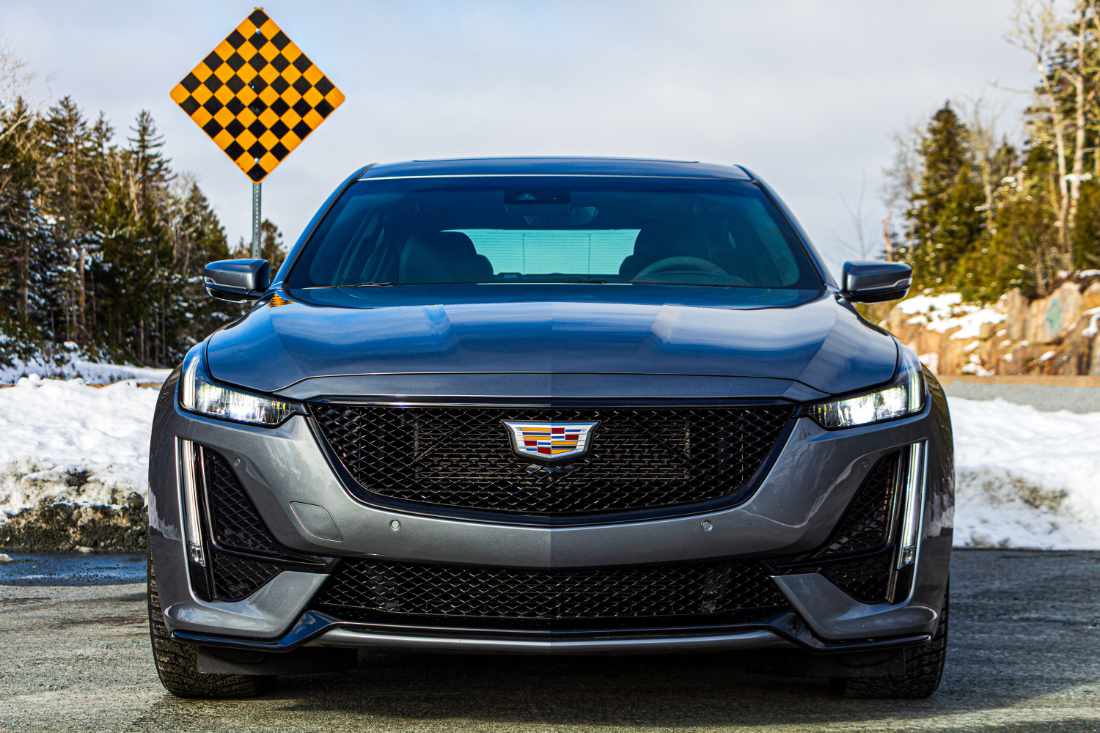 Cure the Blahs with a Cadillac and some Halifax Food

Evan discovers it takes a Cadillac CT5-V and some of Halifax’s finest food to cure the late-winter blahs.

It takes the right car, it turns out, and then the car does the work for you.

As much as automakers and fans drone on about specific figures, when it comes to luxury and performance cars, it’s not the spec sheet that matters. It’s how the car makes you feel. That’s why you’re paying the big bucks. Otherwise everyone would end up in a Toyota RAV4 or a Sienna if you have a family.

That little spark, the magic, the warm tingly feeling that makes you wonder if an object has a soul.

I was only planning to go for a short drive to pick up some milk in the Cadillac CT5-V when that feeling took hold and it turned into a day of exploring some of Halifax’s best feel-good destinations.

Cadillac has managed to capture that ‘spark’, making you feel warm and tingly

It’s hard to put a finger on how exactly one car makes you feel special while another one leaves you cold, but Cadillac has somehow managed to capture that feeling in nearly all of its vehicles.

Start with the sharp lines and long LED accents and run with it.

The CT5-V looks low, wide, and mean; the best of American automotive styling across the line. Get in and the bucket seats envelop you. But it’s the massive thickness of the Alcantara steering wheel and the (magnesium) paddles behind it that make this a cosy place. Even if those paddles are ice cold at the moment.

Push the start button and the engine fires with a rumble that’s loud enough to start the curl of a smile at the edges of your mouth, but still restrained so as not to bother the neighbours.

While the spec sheet leaves you drooling for the supercharged V8 of the Blackwing, this twin-turbo V6 sounds the business and it moves the car along effortlessly. Effortlessly enough that I’m starting to think, even though it’s threatening to snow and the sky is nearly as grey as the paint, it’s time to do more than just a milk run.

Feel-good stops in the Cadillac CT5-V include the Hali Deli, best smoked meat east of Montreal

First stop: Hali Deli, the Agricola Street home to the best smoked meat east of Montreal (and maybe as good as anything in that city, but I’m not here to start fights today). There’s not a bad choice on the menu, though, with knish, latke, and a menu packed with food to warm up a cool day.

I tear into the thick but buttery sandwich, already starting to see the sky begin to brighten. Maybe that’s just me.

Feeling full and sufficiently warmed, I walk out to the next highlight of the day, a Chrysler K-Car wagon, the nicest one I’ve seen on the road in more than a decade. I’m not sure who is driving that on salty winter roads, but I hope they’ve kept up the undercoating.

Like my mood, the sky has brightened and I toggle the CT5 into sport mode so I can listen to the pipes echo off from the buildings as I head further downtown. After circling the roundabouts, it’s time to head to Gottingen and the home of the Halifax donut fight.

Somehow, after decades of no fancy donut shops, Halifax has ended up with both Vandal (the OG) and Fortune, just a block apart.

I’m not sure if there’s an actual fight, but the idea of the two pastry retailers facing off in a powdered sugar and sprinkle-fuelled street fight is good for a laugh. Sorry to the Vandals out there, but I’m team Fortune. A half dozen for later is exactly what the doctor ordered.

Ok, maybe not exactly what the doc ordered, but if a donut lifts you from your doldrums then eat that donut. But not while you’re doing donuts in a CT5-V, because the all-wheel drive system makes it tough to get the car into a spin like that, or so I’ve heard.

Donuts acquired, I spend more time cruising down Hollis and Lower Water streets. The magnetic ride suspension makes the cratered and shattered pavement feel like brand new, and, sufficiently caffeinated, I’m feeling the same. I want to drive more, I need to get home, but the CT5-V seems to tell me telepathically it’s not done with me just yet.

There’s one last stop before I take the long way home, to get bagels for breakfast. Izzy’s is my choice for the best New York-style bagels in the city. My wife, however, prefers her circular cooked dough the Montreal way and it’s her turn, so I go for the doughy sweetness you’ll find under the Bagel Bagel Bagel sign at East Coast Bakery on Quinpool.

Another half dozen and some cream cheese and I have a week’s worth of carbs sitting on the seat behind me that might get eaten before noon the next day. Or before I get home.

Call it a problem for later. Right now I’m trying not to get sprinkles or everything seasoning on the CT5-V’s carpet because I don’t want to worry about it later and I won’t want to miss a single taste. I’m too busy feeling good about visiting some of my favourite spots in the city.

It might not be the best luxury sedan out there and it might not have the best handling on the limit at the Nurburgring (maybe it does, I haven’t checked), but that doesn’t matter.

What matters is the smile that the Cadillac CT5-V puts on my face when I pull back into my driveway.

Making you feel special, feel recharged, feel like yourself again. That’s the sign of a luxury car, not lap times on a mythical board, and it’s where Cadillac does its best work.

The Germans might offer a more austere experience with sharper handling and the Japanese automakers something with more precision, but, much like my day’s eating, the most special is a blend of all worlds that leaves you feeling delighted.