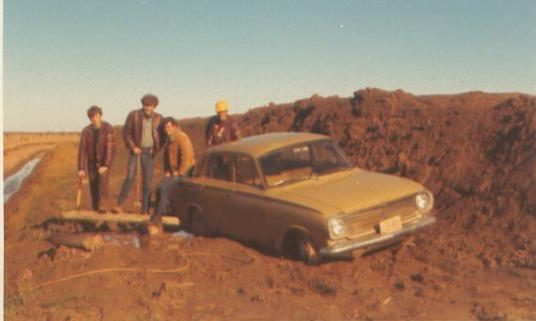 Garry and Larry Sowerby arrived for their sophomore year at Mount Allison University sharing ownership of a red-hot 1967 Mustang GT Fastback. When the snow flew, it was stored and replaced with the drift-jumper known as Green Slime, a 1961 Vauxhall Victor.

Aside from a $99 1954 Ford Victoria I bought the last year of high school, my first ventures into vehicular ownership were at college.

The years at Sackville, New Brunswick’s Mount Allison University between 1968 and 1972 provided the chance to dabble with more cars than was probably necessary. Identical twin brother Larry was attending Mount Allison at the same time so we decided to go splits on any vehicles we bought. If we had more than one, then I owned half of each of them.

The concept of splitting ownership on more than one car seemed rather exotic with the option to change units daily. It also meant paying half the repair bills on twice as many cars.

Larry and I arrived at Mount Allison in a ‘61 Mercury Monterey we had purchased for $600. The immaculate gunmetal grey beauty had originally belonged to my father. We picked it up after the second owner traded it at the car dealership where we had part time jobs as car cleaners and lot boys.

An adolescence spent nerding out over cars

Five years earlier, as a 13-year-old, I had learned to detail cars to full nerd level on that Mercury. I steel-wooled the white wall tires, spent hours getting at interior bits with a toothbrush and kept the engine spotless. Waxed valve covers and air cleaner were the order of the day.

The following summer, between freshman and sophomore years, we sold the Monterey for $1,000 to use toward the purchase of a two-year-old 1967 Mustang Fastback. The GT 390  four-speed manual cranked out 335 horsepower and is still a favourite of the 100 or so cars I’ve owned.

The Mustang was a cool ride but all those horses and the wide oval tires were not conducive to harsh winters on the Tantramar Marshes that separate New Brunswick from Nova Scotia. So the Mustang went into storage while Larry and I went in search of a winter drift-jumper.

We found it on Thanksgiving weekend during a visit home for the turkey feed when Larry spotted a ‘for sale’ sign on a car that belonged to Ralph Whitely, our eighth grade science teacher.

The 1961 Vauxhall Victor was at the absolute other end of the spectrum from the flashy Mustang.

Mr. Whitely had put rear leaf springs from a ‘58 Ford on the faded gold heap which jacked the rear up an extra foot. It had plenty of rust and the skinniest tires we had ever seen. It was butt ugly.

Of course we had to have it. We forked $135 over to Mr. Whitely, slapped “Whose Chicken?” decals on the front quarter panels and headed back to Mount A, feeling somewhat humbled without the rip-snorting red Mustang.

The Vauxhall turned out to be a campus hit as it degenerated through the fall and winter.

By February, the rocker panels had all but disintegrated and a hole in the floor had grown to a point where small grocery items like a box of Kraft dinner or a pack of baloney would drop onto the pavement below. One of the rear spring shackles got into the habit of flipping itself around throwing the right rear of the body so high into the air that the front bumper would scrape on the pavement.

No problem, we just removed the bumper and stuffed it under Larry’s bed.

Ugly was getting really ugly!

But the Vauxhall never needed work other than the engine block heater for the icy winter nights, installed by Don Filmore, the mechanic at the local Irving filling station. The heater, from a 389 Pontiac GTO, kept the little four-cylinder so warm that, even on mornings when the temperature plunged to minus 30 degrees Celsius, using the manual choke would flood the carburetor.

One day Don told me New Brunswick was introducing a safety inspection system and the Vauxhall needed to pass an inspection because the town cops had their eye on it. Don knew that mechanically the Vauxhall was OK but insisted I should put rocker panels and a bumper on it. A paint job wouldn’t hurt either.

I sacrificed the next weekend to work on the Vauxhall. The paint shop at Moncton’s Mercury Lincoln dealership donated the dregs of a half dozen cans of paint that when mixed resulting in a light florescent green colour that looked like bad-tasting medicine.

Galvanized eavestroughs were pot-riveted into the place of rocker panels. Duct tape was used to cover most of the rust holes and then I hand brushed the gooey green mixture onto it from the bottom up. That way, if I ran out of paint the worst of the lower body rust would be covered.

There wasn’t enough for the roof so I painted it with red primer while everything but the glass, tires and lights got the green slime.

It was a red-roofed, chromatic masterpiece topped off with a 2×10-inch plank bolted to the front for a bumper.

Clearance lights from a transport truck were attached to the top of the front fenders for turn signals.A circuit connector switch “borrowed” from a physics lab was bolted to the dash as a horn button and we soon became adept at slapping the dashboard whenever a blow of the horn was necessary.

In the spring we got the Mustang out of storage.

The Vauxhall had done its job so it went up for sale. A young farmer from Lockport, a five-house community at the head of the Bay of Fundy, bought it for $90. His wife was in the last stages of pregnancy and they needed a car to get her to the hospital when the time came.

I showed him the quick-draw horn button, how to flip the errant spring shackle back into position and warned him about not choking the carburetor when the block heater was used.

The following fall we put the Mustang away and picked up another Vauxhall Victor, this one in pristine shape.

One afternoon, Larry and I took a drive to Lockport to look for the Green Slime. It wasn’t in the driveway of the family we sold it to but, in the cornfield across the road, I noticed an odd-looking, rudimentary farm tractor hooked up to a small utility trailer. The tractor had very skinny front tires and the back was jacked up to the point of ridiculousness.

Then Larry noticed the front bumper. It was made of wood and although badly splintered and scratched, the fluorescent green colour was unmistakable.