I hate working on cars, but that’s OK

Evan Williams hates working on cars and is not afraid to admit it. Come on, you can admit it, too.

I hate working on cars. There, I said it. It’s the only activity that manages to semi-reliably bring me close to tears. Yet, I keep on doing it.

I just want to let you all know that it’s ok if you hate turning wrenches, too. There’s also nothing wrong with hiring a professional.

Tell them that you took your ride to a shop for some suspension upgrades or other customization, however, and suddenly its cries of ‘built not bought!’ and ‘shame on you and all of your descendants’.

There is no shame in sending your project car to the shop for work. Ignore the ‘built not bought’ nonsense.

I’ve been working on cars (and everything else) since I was a teenager and my first vehicle needed new rear drums.

This was before you could just Google your fixes, so I was using the classic Chilton manual.

I couldn’t fit the new drums over the old shoes and spent hours trying to figure it out. The fix was easy, I needed to spin the adjuster because the old drums were worn thin and the new ones weren’t. But there was no way I was figuring that out on my own, so to the shop it went.

Ten years later, a thermostat in a front-drive Impala: a design where GM decided that the failure-prone part should be hidden under the throttle body and require you to remove the exhaust crossover.

Of course, a thermostat never fails in the summer; it’s in the winter, when it’s -25 and your toasty garage is a couple of degrees warmer with slightly less windchill.

It took me more than 10 hours over three days of Christmas vacation and multiple parts store trips. Frankly, I was shocked that it ever sealed. It was miserable, and I saved maybe a hundred bucks. I did appreciate the heat, though, on the six-hour drive home from mom and dad’s.

My aging, leaking BMW reminds me how much I hate working on cars

Now I’m back to a bare interior on my aging BMW and I’m reminded how much I hate working on cars.

It’s had a water leak from the dash that the previous owner neglected to mention. All that sloshing water under the carpet was frozen when I bought it.

For six years, I’ve been tackling all of the usual leak areas for this model, starting with the firewall drains. I’ve spent hours investigating the aftermarket sunroof that, as it turns out, is just fine after 24 years.

And still it leaked.

Finally, I realized that I had to pull out everything. Everything. 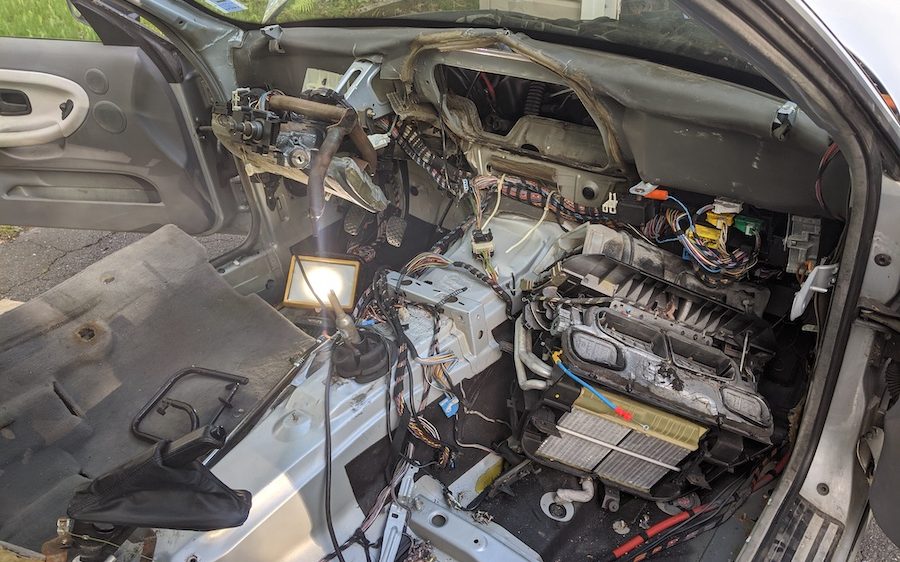 The heater box needed to come out, and that was probably the first (or second) part that the Bavarians installed on the bare chassis after the carpet, which also needed to go.

Dozens of plastic fasteners and unmarked screws strewed across the driveway and I had the heater box out. The original gasket was long-since dead. So I sealed it with caulk, waited, and watched the rain stream in.

I caved. I found the surprisingly still-available new gasket. Then I watched as water from the hose didn’t roll in. This was in April.

Because I’d been trying to fix this leak for years, I wanted a few hard rainfalls to come down before I called it fixed.

Of course, this being 2020, it was suddenly dry in Halifax in the summer. The rain did not fall.

Finally, late August brought enough rain that I was confident I was more watertight than a submarine.

Now, it’s time for the new carpet to go in.

I had to glue the doors back together (24 year old glue had given up a decade ago). I had to figure out where each bolt, nut, and screw in this bucket goes like some sort of Ikea project from hell.

Oh, and I need one or two of a bunch of different fasteners that you can only buy in packs of 25, which based on the price are shipped from the moon.

I’ve spent countless hours on this heap that I barely even drive when it’s running, because installing a lowered aftermarket suspension and sticky tires have ruined the ride.

Had I just paid to have it fixed in the first place, I’d have been driving (and racing) the car for the last few summers instead of having a stylish German driveway ornament.

What I’m trying to say here, is that you shouldn’t listen to any of the ‘built not bought’ nonsense.

Doing your own work can be time-wasting, frustrating, and incredibly taxing both physically and mentally. Excellent mechanics and specialist shops exist for a reason. 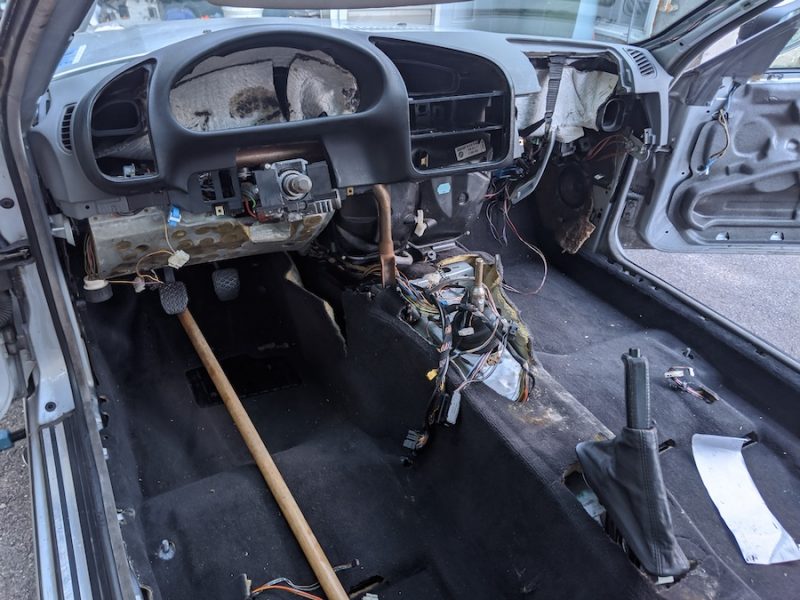 If you like working on cars, by all means, keep doing it. If you don’t, there’s no shame in dropping it off at the shop.

If you like turning wrenches, keep doing it and enjoy that time, because there’s no denying the satisfaction of a job well done.

But if you don’t like working on cars, that’s ok. Don’t let anyone tell you you’re not a ‘car guy’ or ‘car girl’ just because there isn’t perpetual grease under your nails.

If you hate working on cars, like me, drop your project car off at the shop and pick it up at the end of your workday. Save the weekend for things you love.