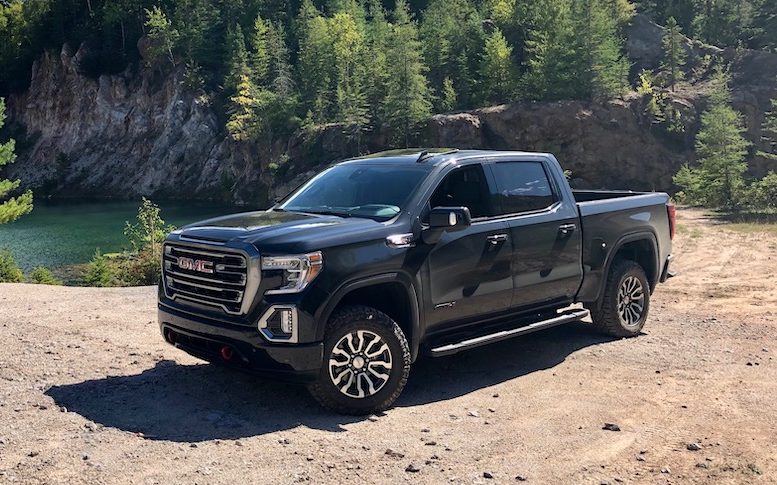 2020 GMC Sierra AT4: Playing in the dirt is allowed

A week in a 2020 GMC Sierra AT4 turbodiesel got Kevin Harrison thinking about getting off the beaten path. Is the off-roader truly worthy of the AT4 badge?

When I found out I would get the keys to a 2020 GMC Sierra AT4 for a week, I knew I had to consult wife Liz. As a marathon runner, she often finds herself off the beaten path during her training runs in rural Nova Scotia.

It seemed a perfect scenario to put the Sierra pickup truck through its paces to see if the off-roader truly is worthy of the AT4 badge.

While Liz certainly knew of some spots, we thought we’d invite along our good pal, Ashley Dickson. She is familiar with a spot in Walton, Nova Scotia, home to three beautiful quarries.

Getting there from the city gave us the opportunity to see how the AT4 handles the concrete jungle. 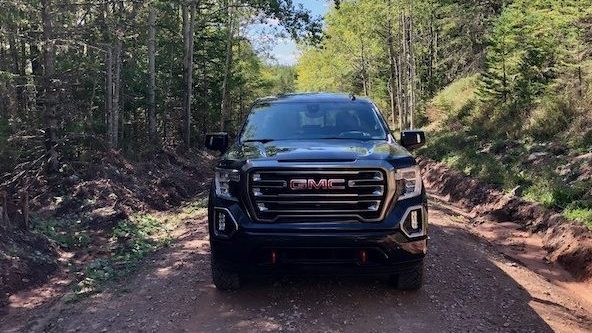 My tester came equipped with the optional 3.0-litre Duramax turbodiesel engine which produces 277 horsepower and a whopping 460 pound-feet of torquey goodness. This made highway passing an absolute breeze.

Perhaps the most surprising thing about this engine is how quiet it is. There were plenty of times I forgot I was driving a diesel. The only noise came from the beefy off-road tires – a small price to pay considering the AT4’s off-roading capabilities.

We picked up Ashley at her camp and took the five-minute drive to the quarries, one of which is right off the main road.

After an arduous, rocky ride on a narrow trail, the Sierra AT4 seemed to just want more

There are 2,700 existing or recently operated pit and quarry sites in Nova Scotia. Getting to most of them requires an off-road vehicle. 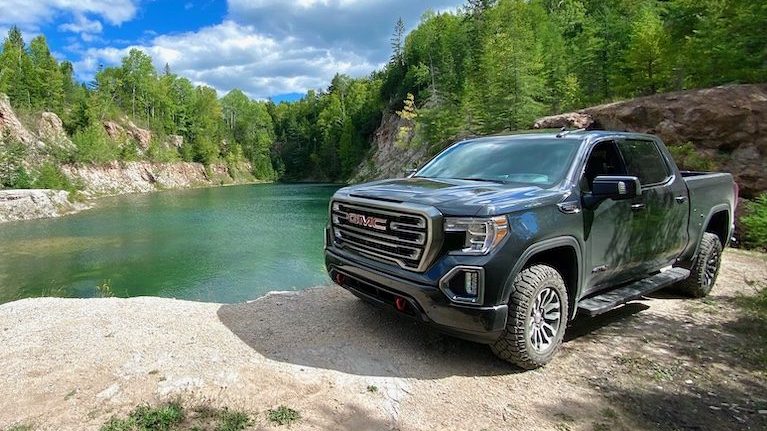 We passed a gaggle of ATVs, whose riders gave the traditional nods and waves, as we approached one of the quarries. I was glad to have the AT4’s two-inch lift over a standard Sierra, as there were plenty of large rocks and ditches down the narrow path.

If the AT4 could talk, I’m sure it would have said, “Is that all you got?”

It handled the off-road trail like a pro – no issues whatsoever.

Once at the quarry, we were greeted by a group of people on side-by-sides who were just leaving. As they passed, one of them stopped to ask about the AT4. He was impressed it made it down the trail, given how wide it is. He mentioned he still runs his 15-year-old Nissan Frontier, but was thinking of upgrading to a half-ton. The AT4 is on his list now, he said.

There are almost 3,000 quarries in Nova Scotia. Sadly, they are often used as dumping grounds

After taking a few pics, we headed to quarry number two, but this one couldn’t be accessed by a vehicle, so we parked the AT4 and headed off on foot. 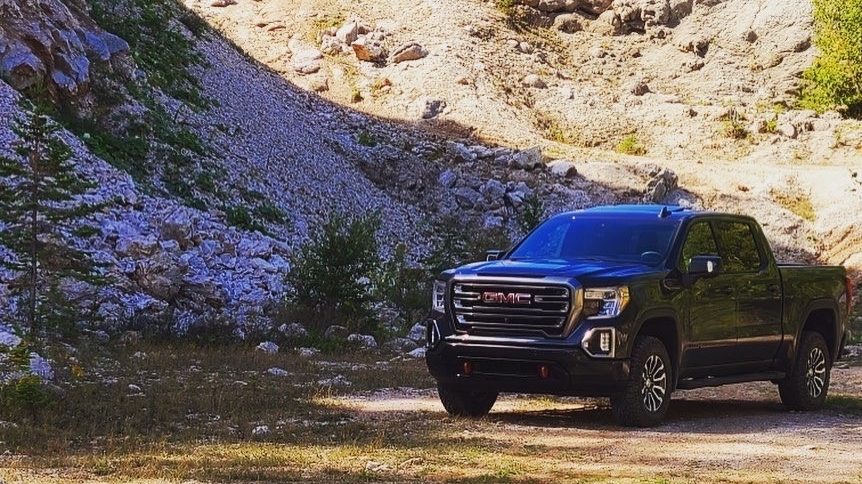 Ashley lead the way, destroying potential cobwebs with a stick. Sometimes we had to break a few branches to form our own path. Perhaps the saddest part of the trip was all the illegal dumping. We came across a lot of junk along the way, like old tires, kids toys, furniture and even an 8 Mile DVD.

But the strangest thing we came across was an old, completely rusted, mangled vehicle resting on the side of one of the cliffs. Naturally, we had to get a closer look. 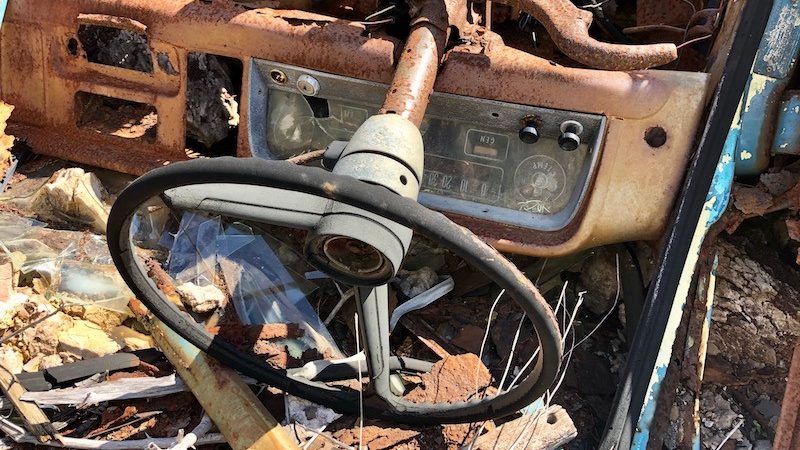 After lots of rock climbing, we finally got to the heap of scrap. The vehicle initially was too garbled and rusty to tell what it was, but upon closer inspection, we spotted a Chevy badge with the number 10 next to it.

A bit of Googling leads me to believe that this rusty heap was once a pickup known as either the C10 or the K10 from the 1960s.

How the truck ended up halfway down the cliff to a quarry is anyone’s guess. Was it pushed off as a part of an insurance scam? Did someone forget to put on the parking brake? We’ll never know. 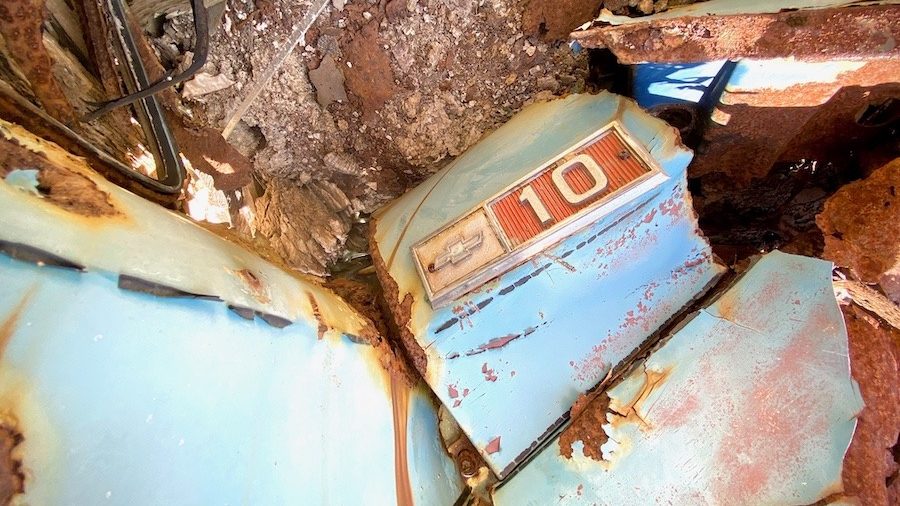 In the end, a bit of quarry and treasure hunting in the AT4 was a perfect way to spend a Saturday in Nova Scotia.

The AT4 proved it could tackle mostly everything we threw at it. The pickup truck made for a spacious and comfortable ride there and back. The diesel just sweetened the deal with added torque and efficiency.

I was sorry to return the keys because I just wanted to do more off-the-beaten-path exploring. Nova Scotia is a relatively small province, but much of it I’ve rarely explored.