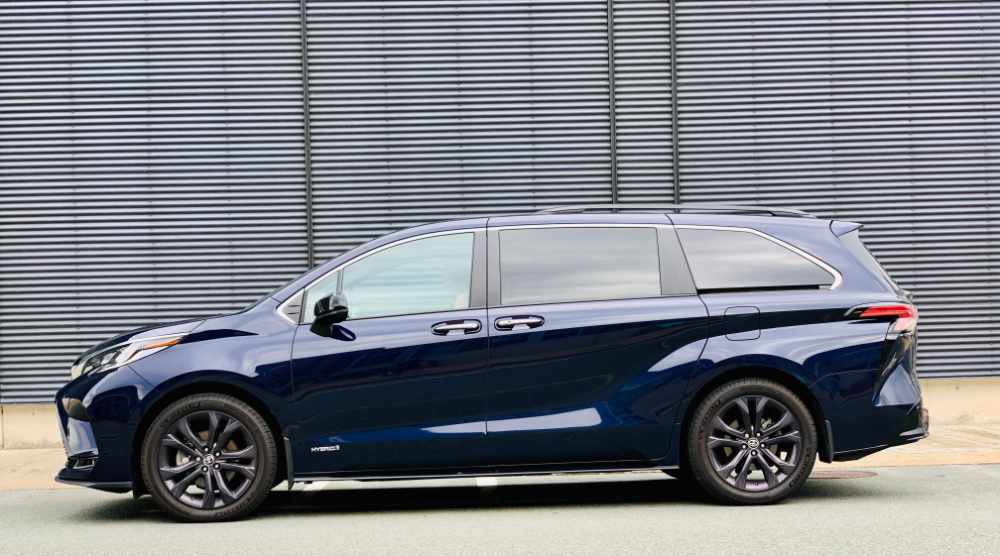 Who knew you could get compact car fuel mileage in a big seven-passenger minivan?

The Toyota Sienna has been a player in the minivan segment since 1997, when it replaced the Previa. The second-generation Sienna appeared in 2003, the third in 2010 and the fourth, and current model in 2020.

After a week in a big, all-wheel-drive three-row minivan, my average fuel consumption was an astonishing 7.1 litres per 100 kilometres.

Built in the US on the same platform as the Camry, the current Sienna was the only minivan offering all-wheel drive, until the 2021 Chrysler Pacifica. The 2021 Sienna is available in front-drive, eight-passenger or all-wheel-drive seven-passenger formats.

In all cases the new Sienna features a hybrid powertrain. And therein lies the difference.

After a week in a big, all-wheel-drive three-row minivan, my average fuel consumption was an astonishing 7.1 litres per 100 kilometres.

During the week, I frequently witnessed 6.1 – 6.5 litre consumption. Those numbers are usually associated with compact hybrid or plug-in hybrid cars, not something this size with this much capacity!

Toyota has been the leader in hybrid technology for decades.

The combination of a four-cylinder gasoline-burning engine and electric motors has been perfected and offered on a wide range of vehicles, cars, crossovers and now minivans.

Toyota’s hybrid expertise has most recently resulted in a 300-plus horsepower RAV4 crossover and the Sienna minivan. For the RAV4, the result is performance not usually associated with the breed and for the Sienna, it brings awesome fuel efficiency.

That alone separates the Sienna from the competition – Chrysler Pacifica, Honda Odyssey and Kia Carnival.

The exterior styling is that of a minivan. After all there is little you can do to disguise the need for three rows of seats and the tall roofline allowing plenty of headroom in that third row.

The design team did ensure the Sienna carried Toyota design cues, especially in the front. It also did a great job inside where there is a spaciousness and worthy of a big people mover.

The first impression when entering the cabin is the number and size of storage solutions. The big, wide and two-layered center console is expansive with easy and open access to the lower level for large objects like purses. On the passenger side, a tray runs from the centre to the door for smaller items. There are bins, cupholders and USB outlets throughout all three rows. 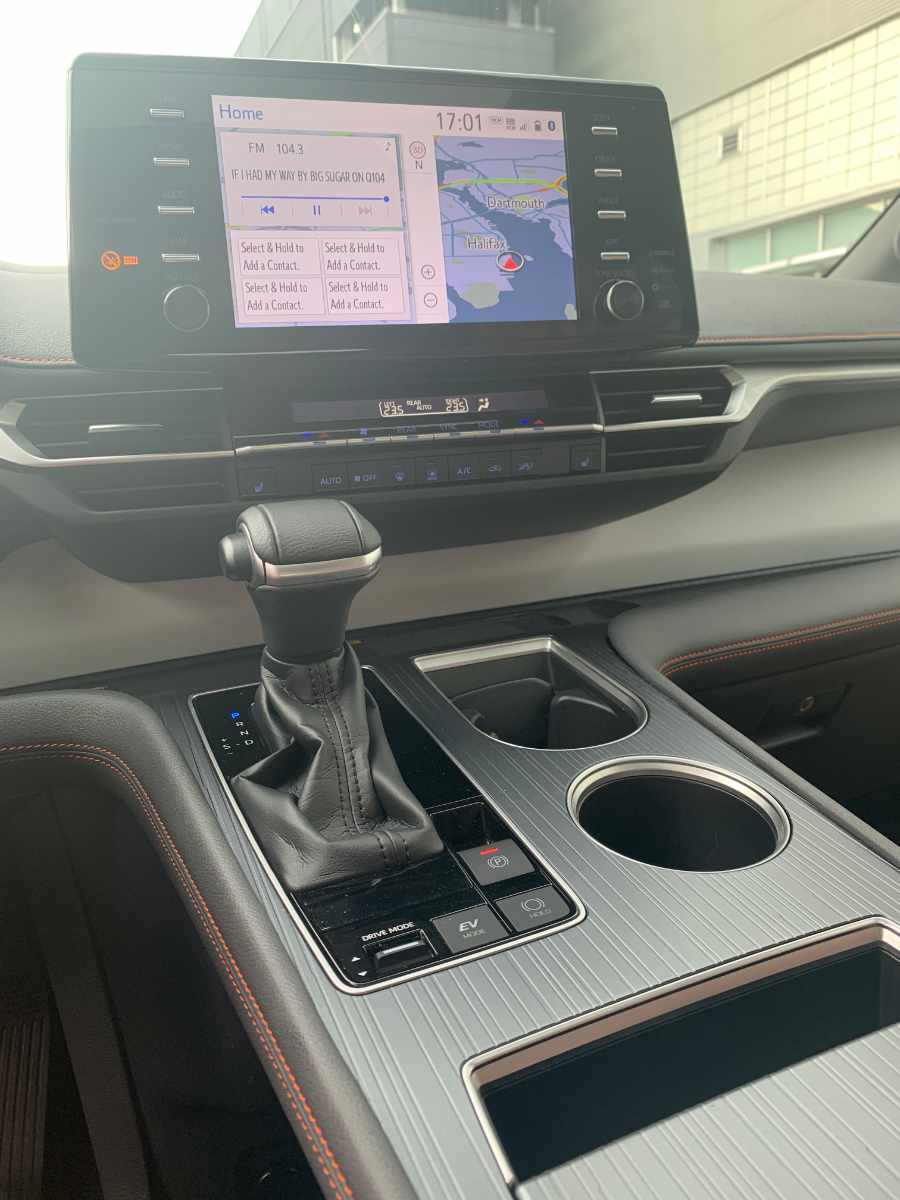 The second row of the seven-passenger configuration boasts a pair of ‘captain’s chairs’ – bucket seats that can move fore and aft through an amazing 50 centimetres of travel.

In the rearward position, there is enough legroom to make it difficult to stretch your feet out far enough to touch the back of the front seats. Pull it forward and third row occupants can actually sit back there.

The standout feature of the Sienna, however, is fuel efficiency.

The 2.5-litre four-cylinder engine is mated to a pair of electric motors. Power is sent to all four wheels through a continuously variable automatic transmission.

The combined output of the engine and two motors is a respectable 245 horsepower.

Toyota does not publish torque numbers but is clear the instant torque provided by electric motors plays a significant role in performance which can best be described as adequate.

To access the amount of power required to move this 5,000-lb (including a driver) vehicle, away from rest, climbing a lengthy grade or when passing, a lot of throttle travel is required. The result is a fair amount of noise from beneath the hood as engine revs are kept up in the range where power is produced.

The upside is the tremendous fuel mileage.

The suspension does a commendable job of coping with rough, and uneven surfaces despite the use of low-profile, 20-inch tires. The Sienna is actually pretty agile in the turns for such a tall and heavy vehicle. It’s no sports car, but much better than expected with minimal body roll. 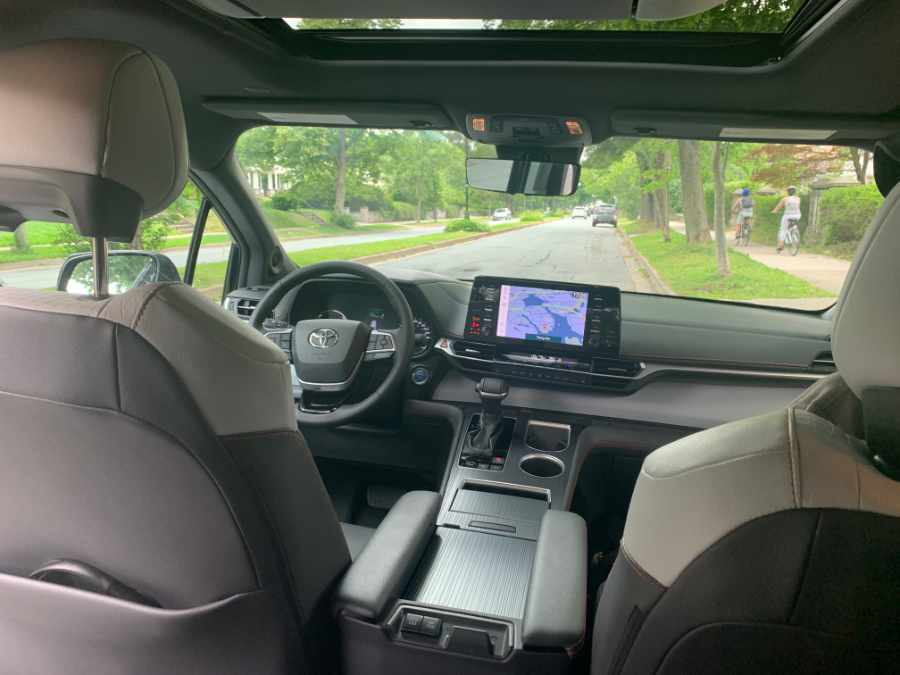 Toyota has put a major push on safety features.