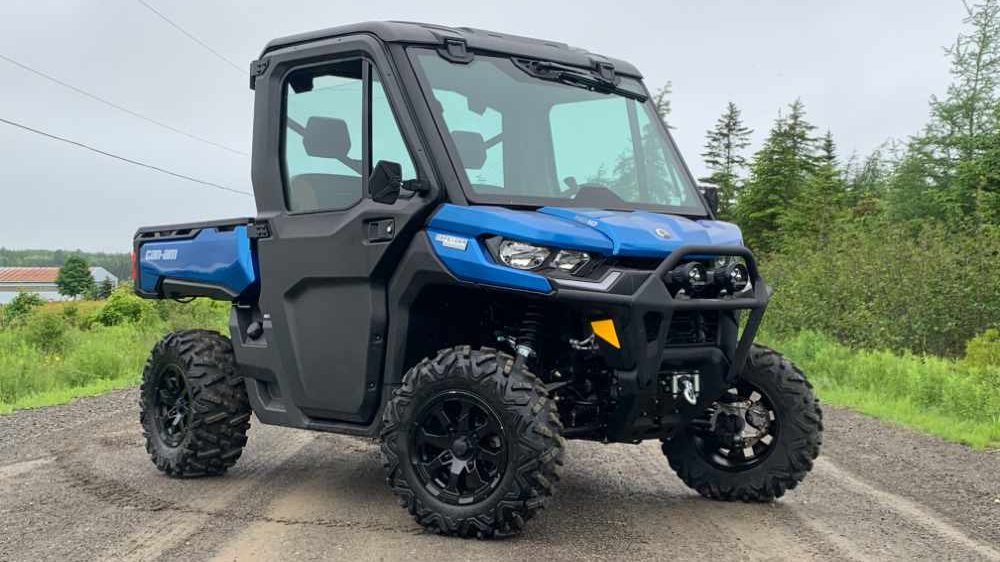 Off Road, On Track: Hit the dirt on Nova Scotia’s ATV Trails

If you live in a rural area of Canada’s maritime provinces, chances are you either own an all-terrain vehicle – ATV – of some sort or know someone who does.

Even urbanites have gotten into the sport, spawning a cadre of weekend warriors who hitch up a flat deck trailer loaded with a Polaris or Can-Am for a bit of off-road fun. 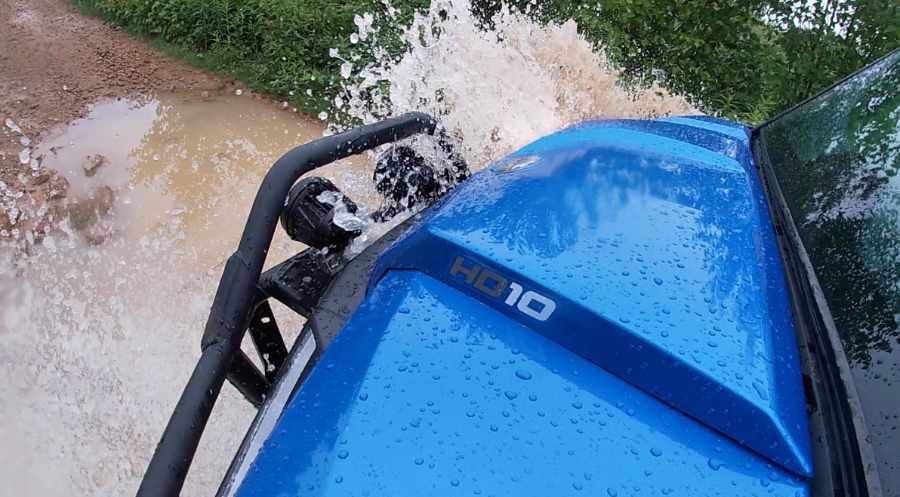 This is due in no small part to the events of the last 18 months. With all hands asked to socially distance from their friends and neighbours, a lot of people turned to activities that could be done in groups but without being physically close to others.

On (or in) your own machine, wearing a helmet, and travelling in the great outdoors is the perfect trifecta for having a bit of interaction without literally breathing down someone else’s neck.

Nova Scotia is home to hundreds of kilometres of well-marked ATV trails.

These routes pop up on big-name smartphone apps like Polaris RideCommand, for example, making planning a trip with your buddies not much more difficult than routing your way through an unfamiliar city while travelling in a car. These routes are numbered, creating a network that spreads out like spaghetti across the province.

It is entirely possible to give off-road trail directions to a new rider, for example, telling them to take Trail 413 South to Trail 410 before turning left into the clubhouse.

In other words, gone are the days of describing a route with landmarks with which only locals would be familiar – tall trees, strangely shaped rocks, and Walt’s cabin.

Some top tier machines like the Polaris Defender Limited come equipped with automotive-like features like a fully enclosed cab, power windows, and an HVAC system that’ll either ward off sweltering ambient temperatures or keep occupants warm in the winter. 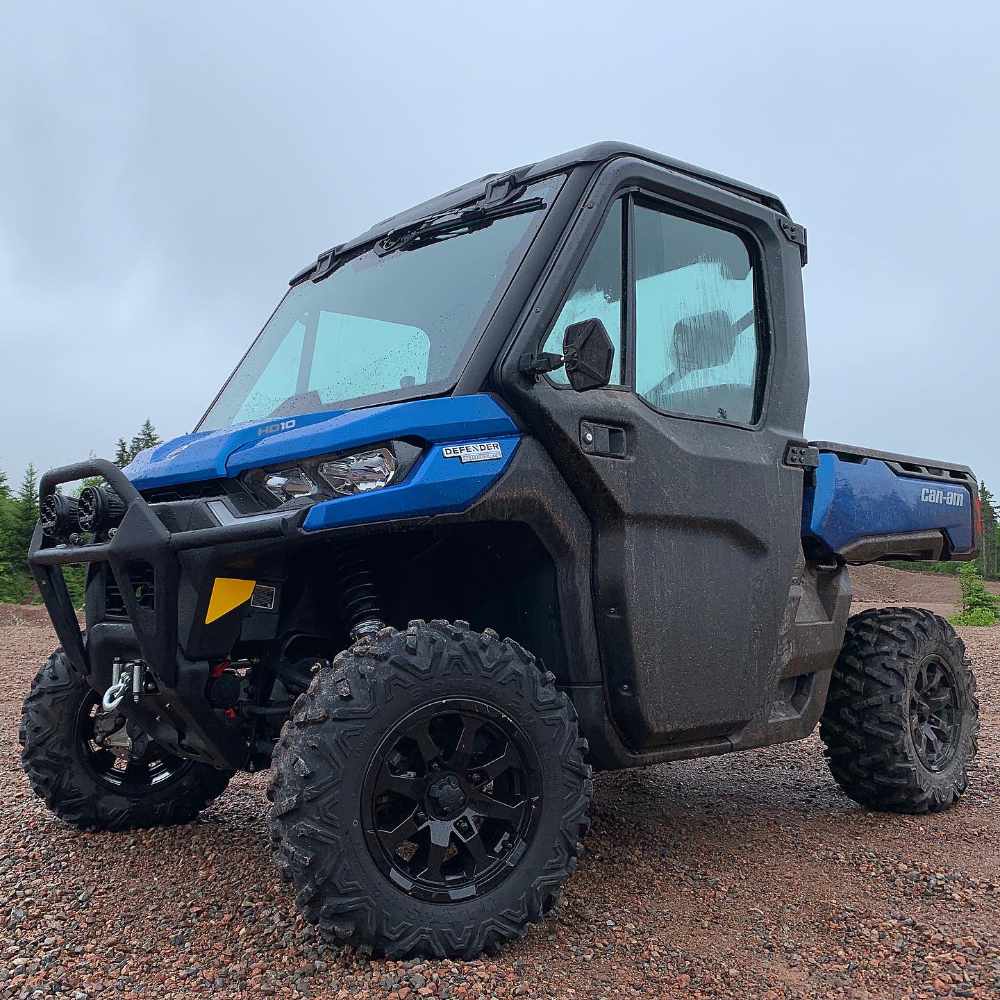 A practical dump box is ready for work in this case, backed by truck-like accessories such as headache racks and burly tailgates. As you’d imagine, their price can stretch into the automotive realm as well. Machines costing the better part of $40,000 are not unheard of at the upper end of this scale.

In other words, some of these ATV owners have money. Lots of it.

The government has been making an attempt to increase all-terrain tourism by launching a three-year pilot project in six communities across the province to safely enhance trail connectivity for Off-Highway Vehicles. Most areas of the province are represented, from Digby County through East Hants and on to the CBRM.

In it, the pilot enables Off-Highway Vehicles to access the shoulders of roadways, and the roadway itself where necessary, in order to safely travel from one OHV trail to another. It can also be used to access facilities, such as gas stations, in these selected pilot areas. 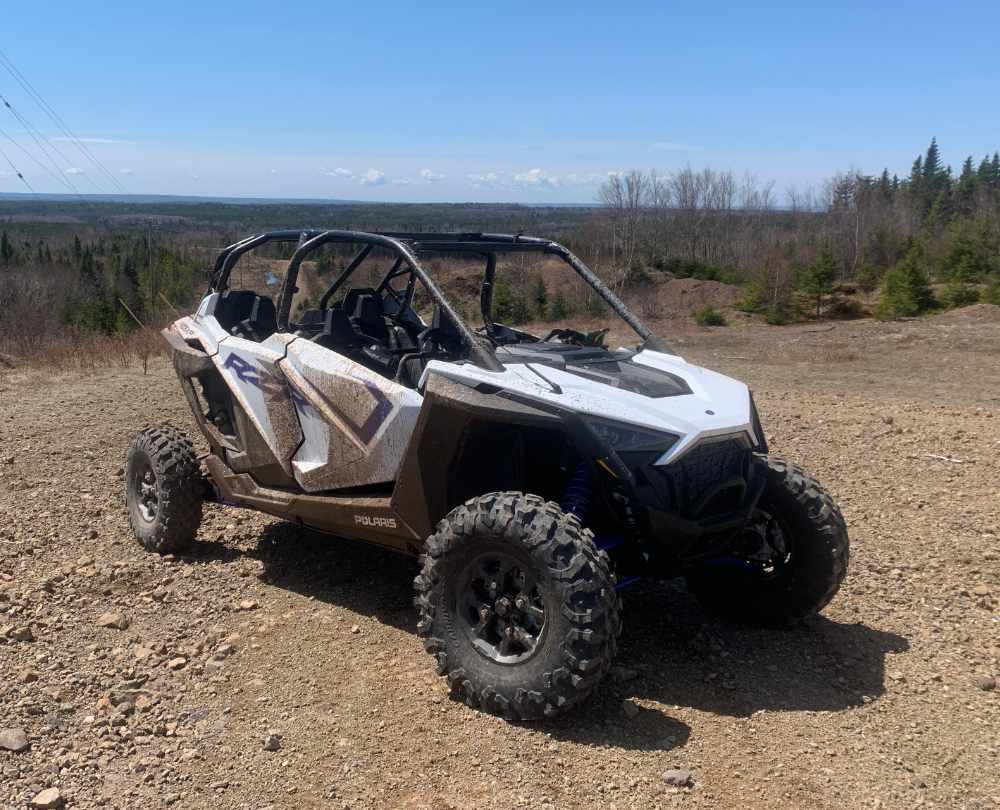 It is worth noting the town of Corner Brook over on Newfoundland island has found success with a similar initiative, permitting all-terrain vehicles on a limited number of paved streets in an effort to draw tourists.

Many local businesses welcomed the change, citing the new ability for riders to drive right to their restaurant door and have a hearty feed, for example. 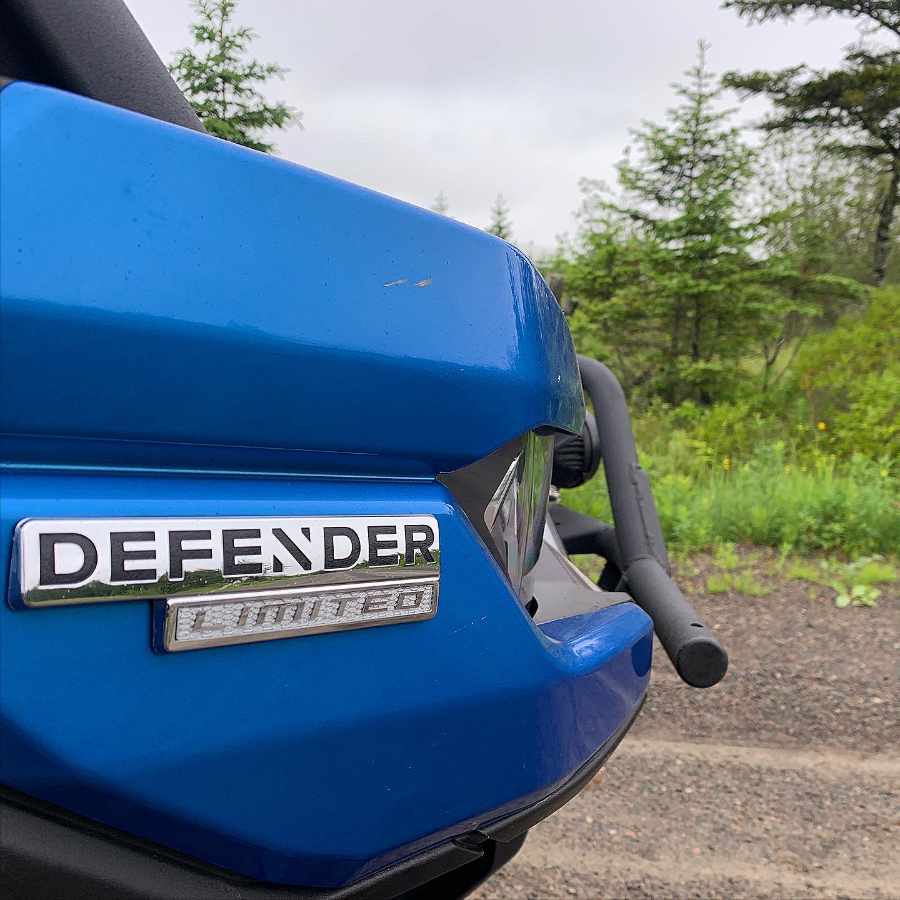 Since there are so many tourist-friendly ingredients already baked into the Nova Scotia trail system – numbered and marked routes, app integration, and easily read traffic signage – your author hopes this pilot program does well and is adopted to more areas of the province.

Some places also require the cooperation of local landowners, since it isn’t uncommon for a trail to suddenly deposit you on the doorstep of someone’s farm. 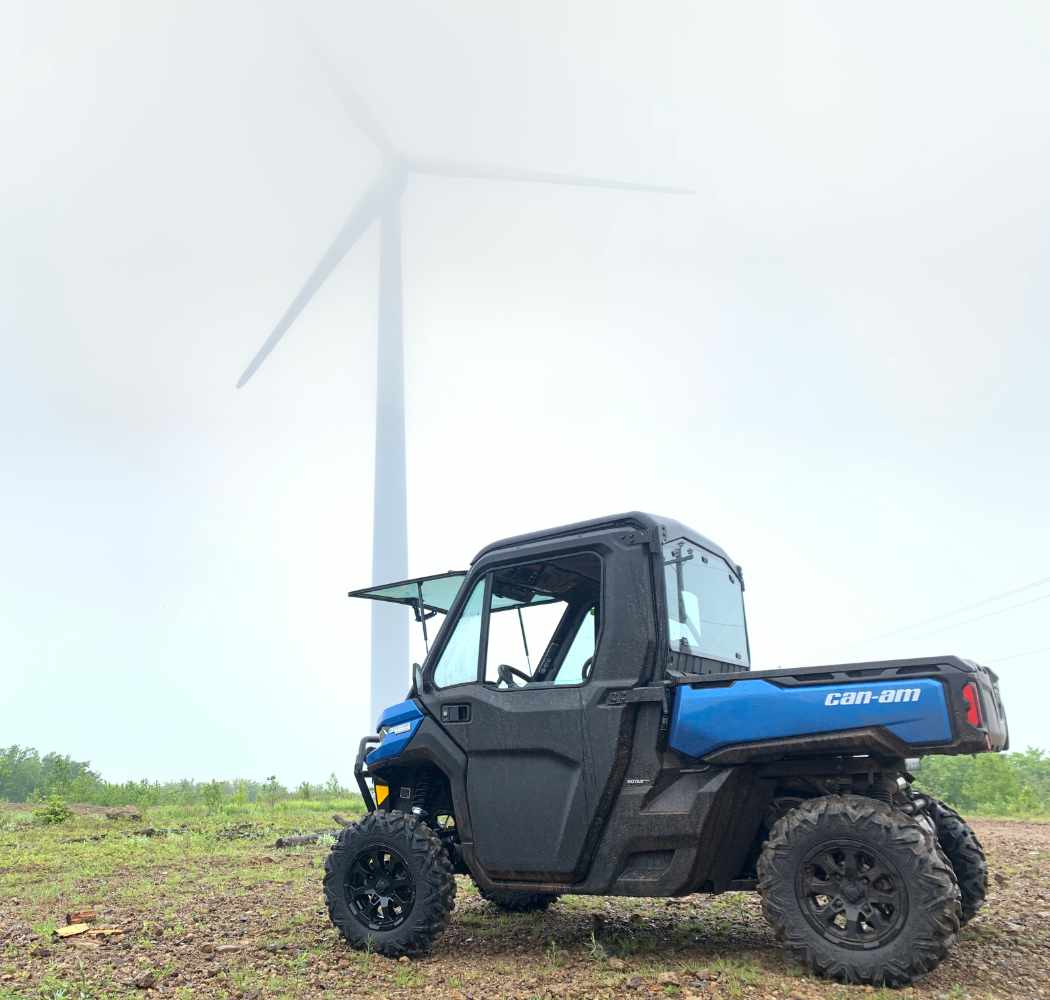 One of my favourite routes cuts clear across someone’s active blueberry field and beekeeping enterprise.

The landowner is more than happy to permit off-roader passage, so long as they play nicely and stick to the trail. This seems a small price to pay for accessing a wide swath of the province. 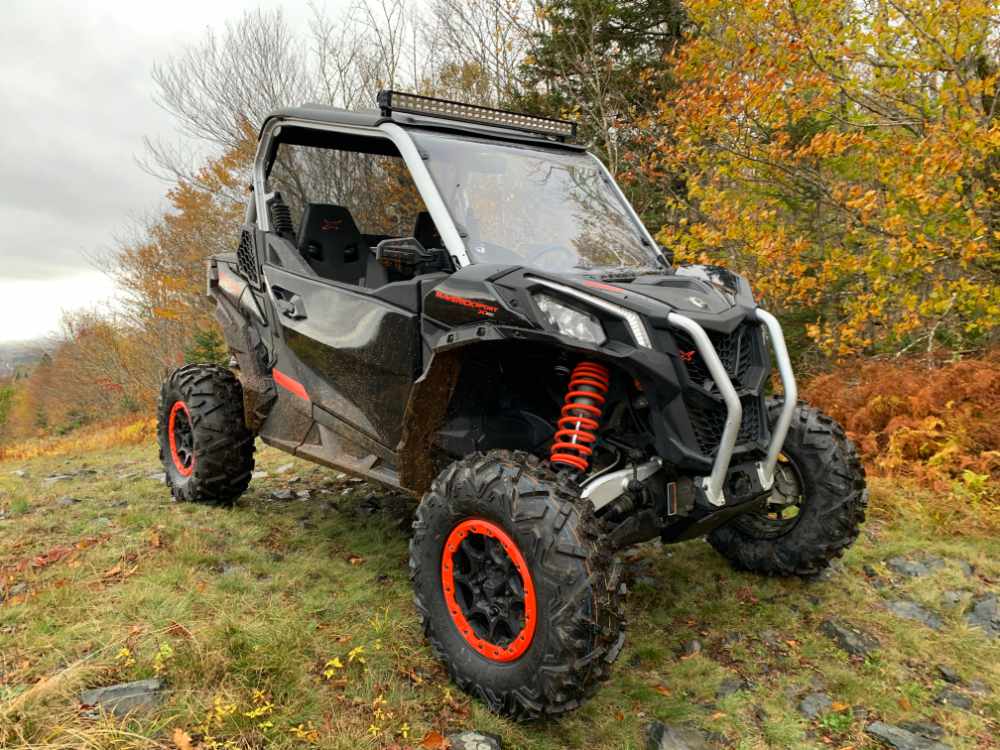 There are numerous ATV clubs in Nova Scotia, providing a way to meet new people who are familiar with the area and get in on some group drives, if that’s your thing.

Yearly registration to the ATV Association of Nova Scotia (ATVANS) is a nominal $50, with money going towards stuff like local trail maintenance and the signage program mentioned earlier. They also run a 50/50 lottery to raise a bit of cash for these activities as well.

ATVANS lays claim to being the third largest ATV federation in Canada with over 40 clubs across Nova Scotia and over 4500 individual members. Your author is one of them.

With all these activities and opportunities, there’s never been a better time to hit the dirt in Nova Scotia.