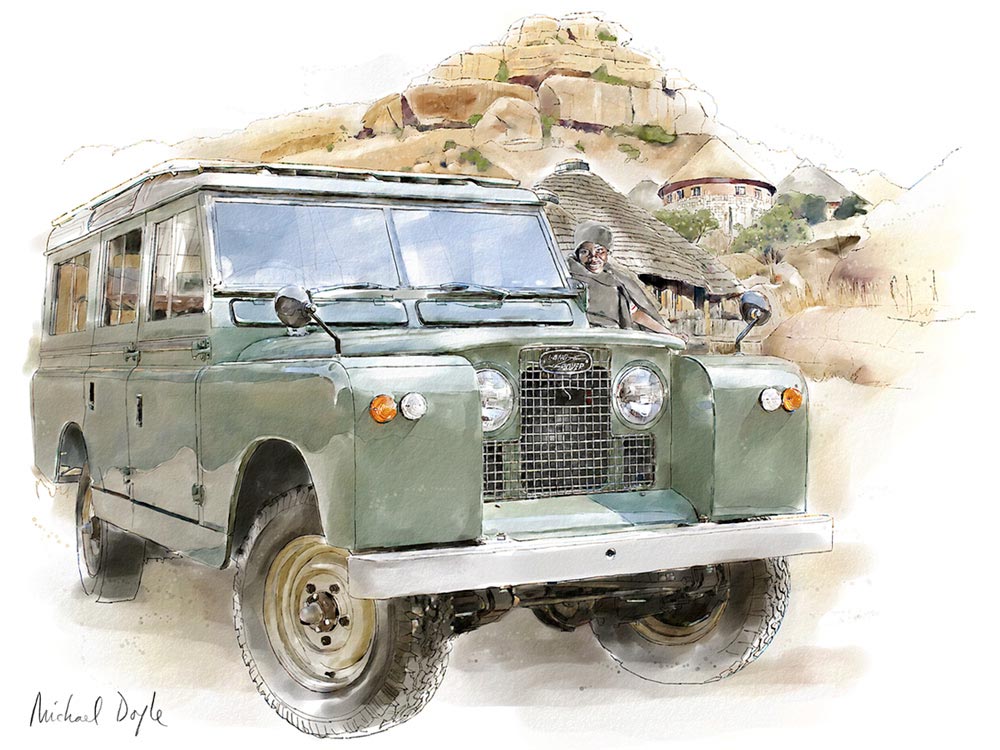 There is one vehicle that reminds me of my father: the Land Rover Series II.

The first time I ever noticed a Land Rover Series II was in late 1969. My parents had just moved to Lesotho, a mountainous land-locked country surrounded by the Republic of South Africa. My father was establishing agricultural development projects in Lesotho, Botswana and Swaziland. The Land Rover was one of the project vehicles.

The Land Rover was conceived after World War II, as a temporary measure to keep the auto manufacturer Rover afloat and generate enough cash-flow to get it back on its feet to restart car production. The Willys Jeep was the initial inspiration. The body was made of an aluminum/magnesium alloy because steel was tightly rationed at the time. Because paint was also in tight supply, Land Rover made do with army surplus green paint.

The big surprise was that the Land Rover greatly out-sold the Rover car, once car production resumed. Thus, the Land Rover developed into its own very successful brand.

The Land Rover my father inherited for the projects was a mid sixties Series II Station Wagon. This particular vehicle had already seen a lot of off-road service and had its own unique body characteristics. It had been rolled in one of its off-road expeditions. Just roll it back and keep on truckin’!

Because this Land Rover was often used to transport workers from one farm location to another, the extended length and rear seats distinguished it from the more common short wheel base Land Rovers normally encountered; lots of room for passengers and farm implements.

There were a few things I always loved about this vehicle. It was a real work truck, stripped of pretty well any extras, though it did sport a “Safari Roof”, a second skin fitted on top of the roof allowing for added ventilation. This helped cool the truck in summer and reduce condensation in Lesotho’s cooler months. I loved the fact that the engine could be hand-cranked in the event of a starter failure; handy in the many very remote areas this vehicle travelled. On an aesthetic note, I got a kick out of the close-set headlights, though I’m not sure if this hindered driver’s visibility at night. The headlights were eventually relocated to the outside fenders in the next series iteration, probably because of regulations in other regions of the world.

Probably my most memorable experience with the Land Rover was one trip I joined in early 1974. One of the project farms was in a very remote area of Botswana on the edge of the Kalahari Desert. After an initial rendezvous in Gabarone, we headed to a remote village to meet with the villagers to discuss an on-going agricultural project. Shortly after leaving Gabarone, the roads graduated from paved to dirt and not too long after, I noticed we weren’t on roads at all. We were travelling cross country, probably following animal trails. We eventually located our destination village on the desert edge.

What I saw next surprised me. The entire village came out to greet us. Chairs were set up in a large circle outside and everyone participated in the discussions. Whenever I think of the ultimate Land Rover experience, this comes to mind – a vintage Land Rover used in the environment for which it was ultimately developed – as a work tool to help a community maintain its ability to sustain itself.

I guess what I would call the Land Rover Series II is a truck’s truck! It’s there to do a job. For my Land Rover Series II illustration, the beautiful highland villages of Lesotho seemed an appropriate backdrop. These beautiful village settings of  rondavels or mokhoro buildings, are often elaborately carved and painted and covered with a thatch roof that is sewn to the support poles with grass rope. Simple and functional like the Land Rover.