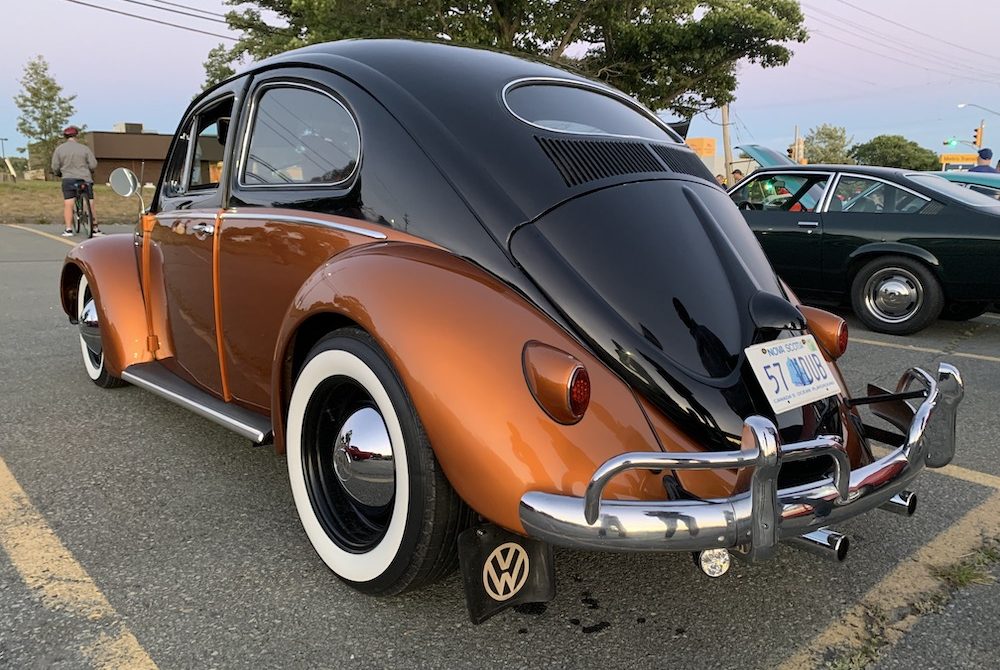 The sharp-looking Volkswagen Beetle in black and a rich copper stands out among the classic and vintage metal at any car meet.

Dennis Doof has had the iconic ‘Bug’ for nine years. He bought it because, like many owners of heritage and unique vehicles, it’s the car on which he learned to drive.

He dismantled the Beetle and rebuilt everything.

He tells us he was certainly not the only one working on the car but he was there every step of the way. He mentions some key people: Ed Boone, who worked on the deconstruction and main metal restoration, Terry Gaudet on the engine build and Dana McAllister on final bodywork and paint.

Peter Hylands, Dennis offers, is a very good friend who did ‘too much to mention’.

The VW Beetle is perfect. He calls it his jewelry car. 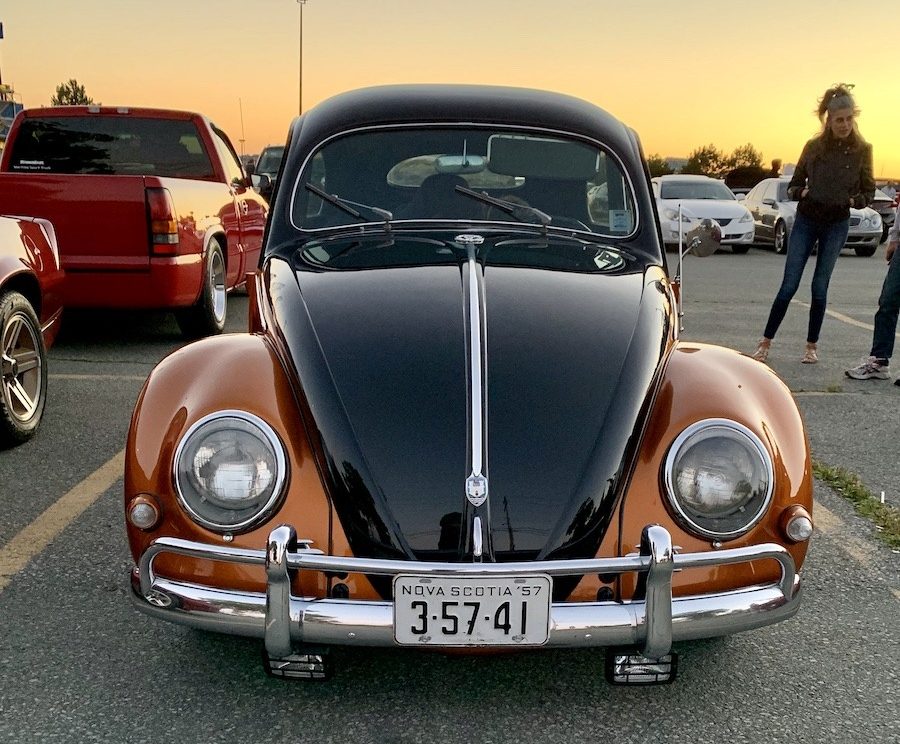 The last year of the back oval window, Dennis upgraded the original 36-horsepower 1192 cc engine to a 1776 with dual port twin carbs, increasing horsepower to around 110. 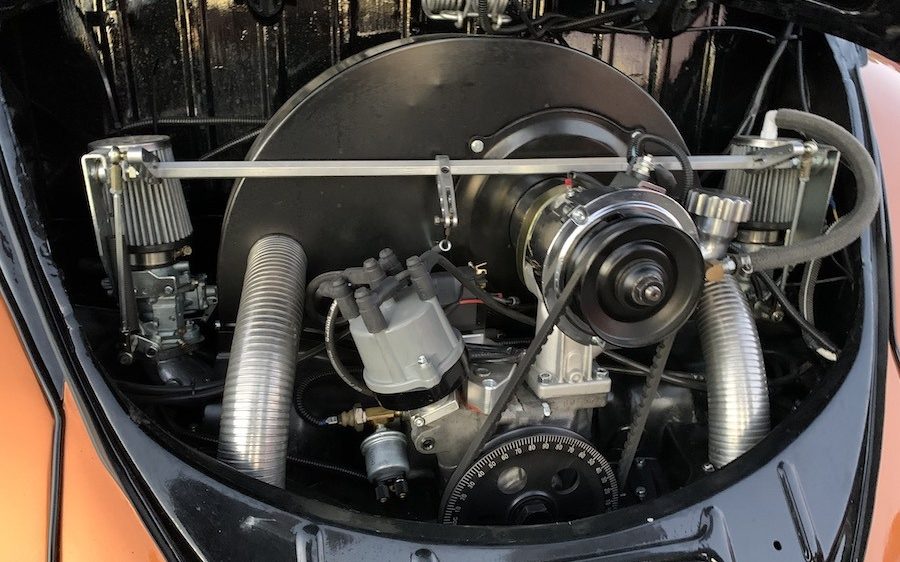 The back rims are seven inches wide and the back end is slightly lower than the front. There’s a narrowed adjustable height beam on the front, which balances the look of the vehicle. And adds cool to an already pretty cool Bug.

Dennis has one more thing to show us. He opens the frunk and displays the fuel tank, painted in the same coppery hue as the outside. “No one else will see this but that’s ok… I know it’s there,” he grins. 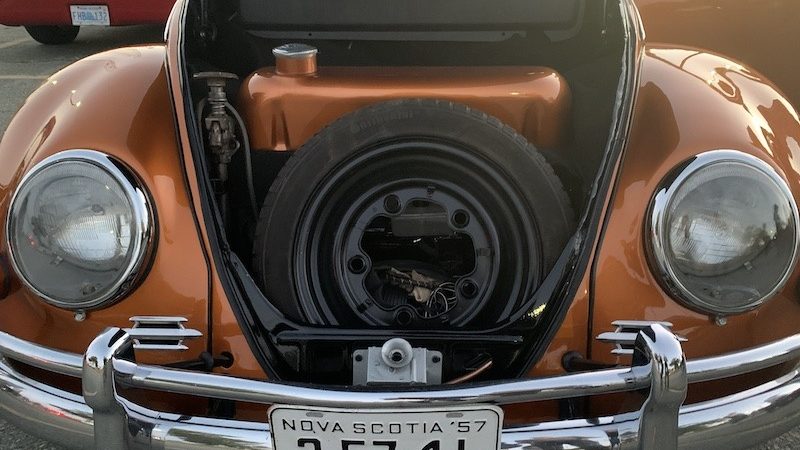 The idea of a Volkswagen, or ‘people’s car’ in German, was conceptualized by Adolf Hitler, of all people, in the early 20th century. The leader of Nazi Germany wanted a mass-produced car for the country’s new road network.

Although Ferdinand Porsche has been credited with the design of the Volkswagen Type 1 (Beetle’s original name), it has since been proven that Béla Barényi, a prolific Hungarian engineer, had come up with the design during his student years, more than 10 years before Porsche finalized the design for the VW in 1938. 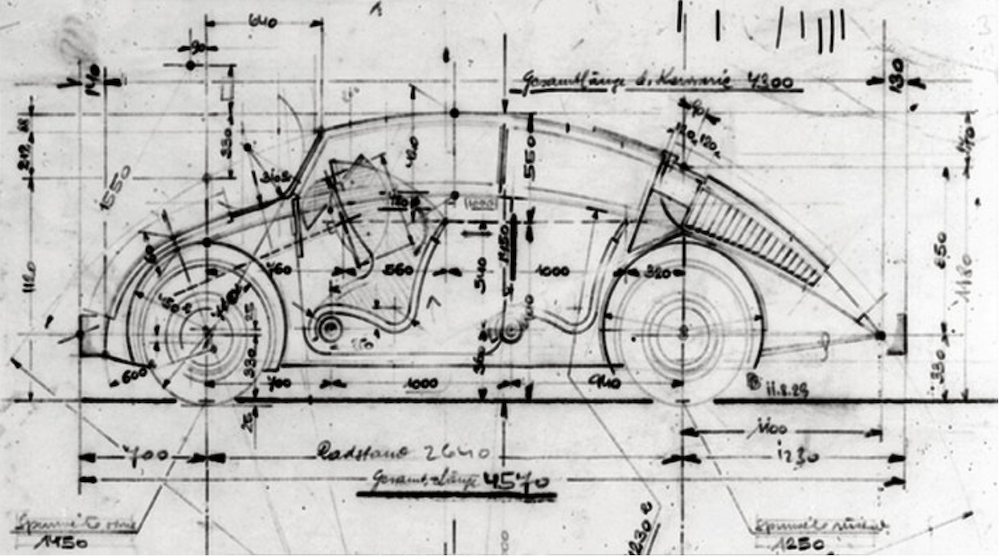 The Volkswagen eventually became the Beetle, or Bug. In France, it was marketed as ‘Coccinelle’, meaning Ladybug.

It was one of the first rear-engined cars since around 1915. Multiple variants lead to a full range of rear-engined cars from Volkswagen with rear-wheel-drive, including the VW Bus in 1950 and the Karmann Ghia in 1955.

By 1956, twenty-six per cent of car sales in Western Europe were rear-engined rear-wheel-drive in a trend started by Volkswagen and picked up by Fiat and Renault. Even General Motors got in on the action in 1959, with the air-cooled, rear-engine Chevrolet Corvair.

The VW Beetle was built from 1938 until 2003. In that time, 21.5 million units were produced, making the Beetle the longest-running, most-manufactured car of a single platform ever made.

The car starred in movies (Disney’s Herbie the Love Bug) and became a symbol of the 1960s and 1970s ‘counterculture’ (a.k.a. those hippies).

In 1999, the Beetle was voted #4 in the International Car of the Century awards.

In 1998, Volkswagen revived the iconic design and introduced the New Beetle, built on the Golf platform. The New Beetle became the Beetle in 2011, until 2019 when production stopped forever.