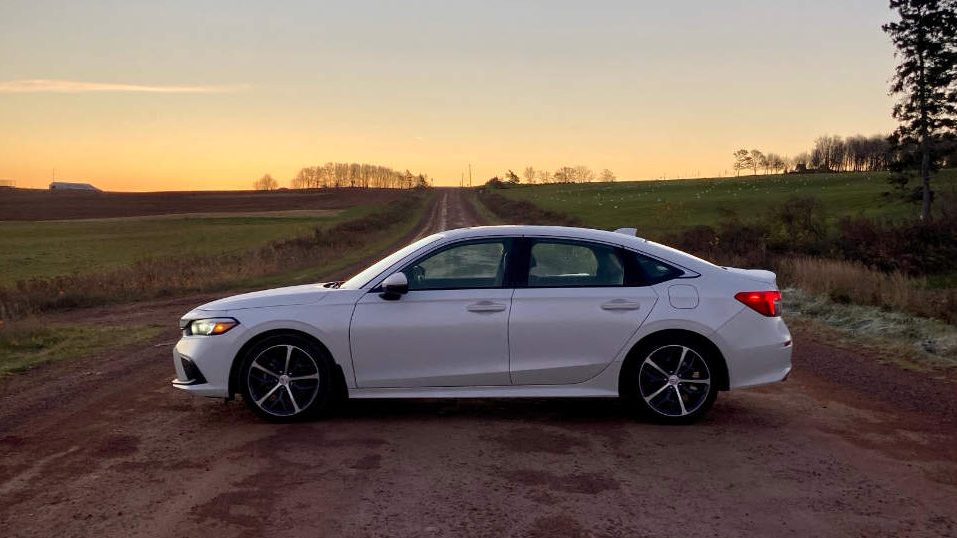 On paper, the 2022 Honda Civic is the best Civic yet. Objectively, this isn’t really up for argument.

Bookended by week-long stints in Acura’s new TLX and the Civic’s own Odyssey sibling, seven days with the latest Civic Touring is a revelation.

It makes better use of space, consumes less fuel while providing superior straight-line performance, combines more technology and creature comforts than ever before, and earned its place on the Insurance Institute for Highway Safety’s Top Safety Pick+ list with top-notch crash test results.

The new Civic also feels like the best Civic – the most fun-to-drive Civic platform; the highest-quality Civic – since the eighth-generation Civic produced record Canadian sales volume.

Ah, yes, sales volume. The act of driving a car is my passion, but its place on a sales chart is my domain. I’m quite certain that over the 17 years in which I’ve been covering the auto industry’s hits and misses, no vehicle has required more of my words in the run of a workday contributing to a variety of websites than the Honda Civic.

Yes, in a line of Civics that ended each of the last 23 years as Canada’s best-selling car, this new Civic is objectively the best yet. But with a mid-year generational changeover and the nearly unbelievable inventory constraints placed on the entire industry, this new Civic is also the first Civic in generations to be in danger of losing its Canadian best seller’s crown.

In honour of those 23 years, and given the possibility that the Civic may – perhaps, probably not, but maybe – slide into the silver-medal position, here are 23 marketplace facts that explain the Civic’s Canadian sales dominance over the last 23 years.

The first year the Honda Civic became Canada’s best-selling car was 1998. Wayne Gretzky was still playing hockey. Roger Clemens was still pitching for the Blue Jays. Will Smith’s Gettin jiggy wit’ it was all over the radio.

1998 was the year in which the Civic became Canada’s favourite car. By that time, the Civic had been on sale in the Canadian market for a quarter-century. 1973 was the first year for the Civic in Canada.

Over the last decade, since the auto market exited the Great Recession of 2009, Honda Canada has averaged 62,084 annual Civic sales.

Having celebrated its 50th anniversary in Canada in 2019, Honda Canada is now 52 years old. By 2020, Honda had already sold 5 million vehicles in Canada – not just Civics – and built its 9 millionth vehicle in Canada.

Honda Canada began building cars in Canada in 1986. The first couple of years were spent on Accords, but the Alliston, Ontario, plant switched to Civics in 1988.

Honda hasn’t stopped building Civics in Alliston since, but Alliston has also been home by times to the Odyssey, Pilot, Ridgeline, Acura MDX, Acura ZDX, and now the Honda CR-V.

In its first year building Civics in Canada, the Ontario plant assembled 37,484 Civic hatchbacks. With the severe parts shortages of 2021, Honda is currently building around 12,000 Civics per month in Alliston.

Over the course of the last five decades, Honda has developed 11 different generations of the Civic. The latest 11th-gen car debuted in mid-2021 as a 2022 model.

It wasn’t until partway through the sixth-generation Civic’s tenure that the Civic became Canada’s sales leader. Honda’s sixth-gen Civic finished its course as Canada’s top-selling car; the next five generations have all led the way, as well.

Honda Canada’s record year for the Civic was 2008. 72,463 Civics were sold that year, 26-percent more sales than the second-ranked Toyota Corolla managed.

8.2 per cent of the passenger cars sold in Canada in 2008, the Civic’s record year, were Honda Civics.

By 2020, when Civic sales had predictably fallen 41-percent from its record high, the Civic’s share of the shrinking car market had increased substantially. 13.4 percent of the new cars sold in Canada in 2020 were Civics.

In 1996, two years before the Civic became Canada’s best-selling car, Honda began marketing an upmarket Civic through its Acura channel. The 1.6EL eventually morphed into the 1.7EL, CSX, and ILX, sometimes in place of a top-spec Civic that only Americans received; sometimes as a mere Acura entry point.

2011, the year Honda’s supply chain was severely disrupted by the tragic Tōhoku earthquake and tsunami, was the last time Honda relied on the Civic for the majority of the brand’s Canadian sales. The Civic accounted for the majority of Honda sales in 2009 and 2005.

Throughout the Civic’s run as Canada’s top-selling car, it was not surprisingly the top-selling Honda in Canada, as well. The Civic’s No.1 status at Honda disappeared in 2020 – the CR-V is now Canada’s favourite Honda.

Civic has lost its favoured position at Honda, but it’s still typically a dominant vehicle in Canada’s car market. Over the last half-decade, Civic typically ends the year 15,566 sales ahead of the second-best-selling car.

Usually, the Civic outsells even its highest-ranked competitor by nearly 1,300 units per month. In 2021, with two months remaining to report, the Civic is only 286 units ahead of the Toyota Corolla.

In modern money, the actual base price for the all-new 2022 Honda Civic sedan – with 49 percent more power, an automatic transmission included in the price, 24 percent more cargo capacity, between 10 and 19 percent less fuel consumption, and standard equipment such as Apple CarPlay, heated seats, remote start, proximity access, and automatic climate control – is now $199 less costly than it was 23 years ago.

Over the course of its 48 years on the Canadian market, Honda has sold 2.25 million Civics.