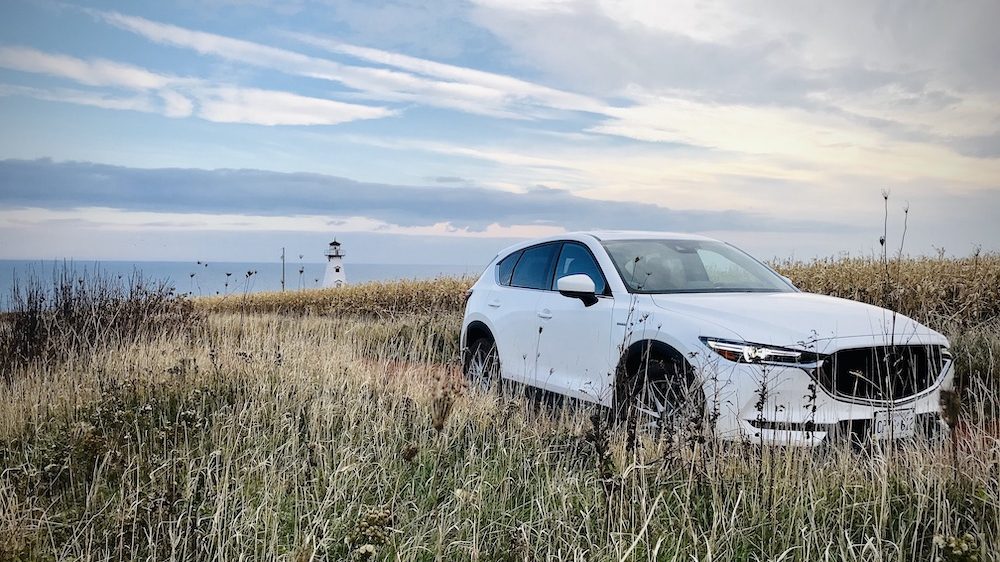 As soon as your author heard a 2021 Mazda CX-5 100th Anniversary edition was headed his way, he began scheming of unique ways to honour Mazda’s first century. 100 Prince Edward Island dirt roads? Why not!

It all fell apart. Or at least the plan, the route, and the schedule fell apart. The snacks were simply insufficient; the vehicle was ideal.

As soon as I heard a 2021 Mazda CX-5 was headed my way in 100th Anniversary guise, I began thinking of ways to honour Mazda’s first century.

Rather than the predictable tropes – 100 Favourite Mazdas, 100 Best Miata Mods, 100 Best Miata Engine Swaps, 100 Best RX-7 Rumours – I wanted an actual challenge. A challenge only seems fitting, as Mazda has constantly been faced with seemingly insurmountable challenges thanks to its status as a small, independent manufacturer with limited resources.

But with one look at the CX-5’s Garnet Red leather, the answer was obvious: 100 prototypically PEI red dirt roads.

It was time to set a record. 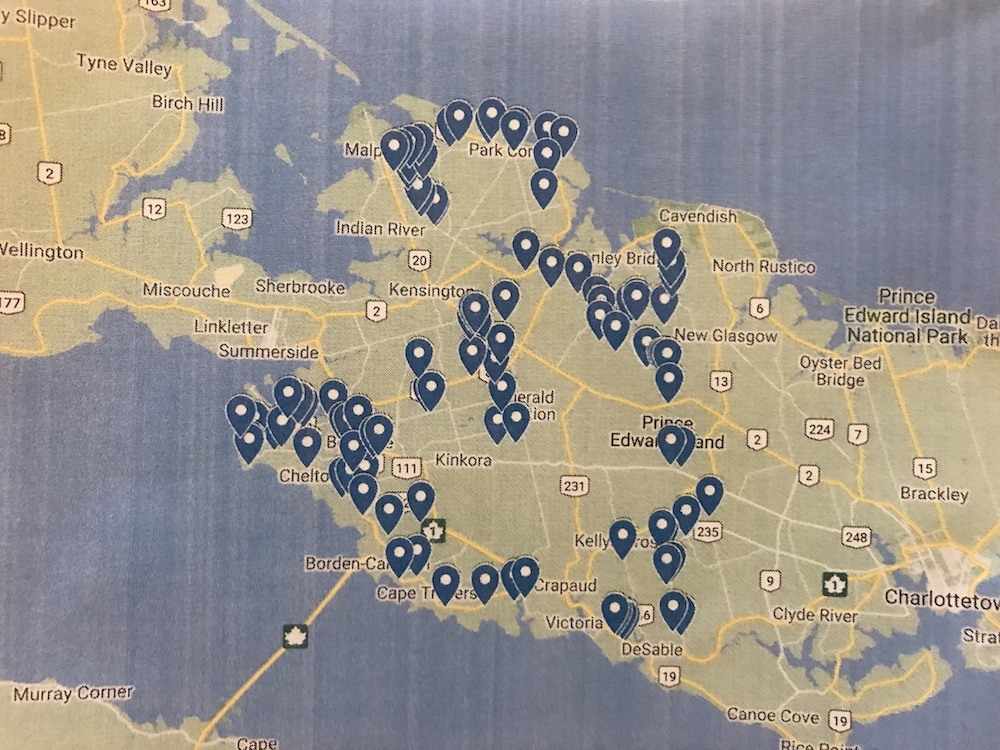 Turbocharged to the tune of 250 horsepower and 320 lb-ft of torque, the CX-5 certainly has the get-up-and-go to make quick time across the middle of Prince Edward Island. The 2.5-litre turbo is optional on the CX-5 GT but it’s standard on the CX-5 Signature and 100th Anniversary Edition. All-wheel drive wasn’t going to be unhelpful in early November’s anticipated mud, either.

In blissful late-autumn weather, the top-spec CX-5 possessed a bundle of features that would prove useful: heated seats and steering wheel for the cool start to the day, ventilated seats to cool me down when rushing in and out of the Mazda in the noonday sun, 10-speaker Bose audio with satellite radio. The 360° monitor with front and rear sensors would help on all the tight turnarounds on ridiculously narrow heritage roads.

Broadly speaking, the plan was simple: I’d be joined by my navigator and frequent ATV riding partner, Jeff, as we departed from Kensington and attempted to snap 100 CX-5 photos on 100 dirt roads as quickly as possible.

The ‘quick’ part would be made possible more by planning than pace. And while we could make life simpler by touching every off-pavement path, we weren’t aiming for cottage lanes in part-time tourist communities. As best as we could, we wanted to hit 100 genuine red dirt roads.

The province of Prince Edward Island maintains over 5,000 kilometres of these roads, but finding the right selection close to our starting point would be key.

In fact, that’s where the plan went awry. The very first road on our initial list, County Line Road in Margate, was evidently paved by the province in early November. It wouldn’t be the last road we came across that had lost its original state.

A list of 100 dirt roads, or roads we believed to be dirt, was mapped out with an emphasis on as many interconnecting routes as possible. That wasn’t going to be difficult north of Kensington, an area both of us knew very well. But as we made our way towards Brookvale in the middle of the province, and then along the south shore back to Borden, we were going to have to move hastily to link up scattered candidates.

Anticipating as little as two and as many as four hours on the road, Jeff and I packed some hydration, potato chips, and peanuts in the CX-5’s centre console. We set off from The Willow Bakery in Kensington at 8:11 AM on Saturday, November 7, and not-so-promptly arrived with hungry bellies at the Blue Goose in Desable just before noon.

Unfortunately, we had covered only 52 of the 100 roads required to set this East Coast Tester-invented dirt road record.


It had been quite a morning. We made rapid progress between Malpeque and French River, snapping photos on scenic routes like Hall Road (where Jeff once rolled another kind of four-wheeled vehicle) and Champion Road (where I once took a ribs-breaking spill on a supermoto) and Cape Tryon Road, where 115-foot cliffs hide hundreds of cormorants and Cavendish’s sandspit is clearly visible just to the east.

With the right conditions at Cape Tryon, they say you can see all the way westward to North Cape and as far east as Campbell’s Cove. Bring your binoculars, steer clear of the fearsomely unstable edge, and follow the tractor path to the western side of the lighthouse so you can see an entirely different view of the beaches between Thunder Cove and Cousins Shore.

By the time we crossed Route 2 between Bertram Road and Clyde Roads, we knew the stellar pace the CX-5 had achieved along the north shore was not to be repeated.

On the Junction Road, I made the executive decision to show Jeff the sights and sounds of the highest point in PEI. Unfortunately, this required the removal of a couple of trees blocking the road, a short hike through the woods. Time was further consumed while considering whether PEI’s 499-foot peak must be the lowest of all provincial and state high points in Canada and the United States.

So many of these dirt roads likely see more winter traffic when converted to snowmobile trails than they do cars in the fall.

That was made more obvious by absolutely shocked pedestrians on roads near Brookvale. (Or was their surprise due to the Ontario license plates and a clearly non-Atlantic Bubble vehicle?)

Clearly Mazda’s CX-5 has become too much of a hit for the vehicle itself to produce any kind of surprise.

Little did most onlookers know, without spotting the tiny 100th badging ahead of the front doors or on the wheel caps, that this is a markedly different CX-5. It’s not just the seats that are covered in red but the carpets, too. It’s an interior that’ll definitely keep you awake.

These aren’t paved paradises, these are roads with stories.

Princetown Road, leading away from Millvale toward the Warburton Road, was perhaps the sketchiest of all 100 after rain had washed portions away and trees proceeded to strictly narrow its path. Yet this very road was once the main thoroughfare to Charlottetown, and now it leads only to the beautiful Old Towne Orchard. (Advice: get to the Honeycrisps early or you’ll miss your chance, but the Cortlands are excellent, too.)

Or how about this one: on the otherwise straight Perry Road near Fredericton, a dog leg exists because the road was initially under construction when one governing party lost a provincial election. The landowner shut down construction because his side lost, but a neighbouring landowner loyal to the new governing party allowed construction to veer off onto his land.

No matter the road or the history or the amount of mud, the Mazda CX-5 proved comfortable. And by the time we found ourselves at the lighthouse in Sea Cow Head, three-quarters done, the CX-5’s comfort quotient was key.

In the GT, Signature, and 100th  Anniversary edition, the driver’s seat is a 10-way unit with memory settings. If you’re going to drive all morning, eat at the Blue Goose for lunch, and continue driving for the remainder of the afternoon, seat comfort becomes the top priority. Not power, not prestige, not paint colour. Seat comfort. And these buckets are winners.

We didn’t hit road No.99 until returning close to home in Clinton, snapping a photo on a different, disconnected portion of Princetown Road. By our count, Woodside Road in Margate was Road 100, or rather it was until I scanned the list hours later and realized that we’d counted 98 twice.

We covered 237 kilometres and hit 101 dirt roads in 305 minutes, taking 40 minutes for lunch and 15 more to snap pictures of a used snowblower in the barn at Jeff’s grandfather’s house.

Unofficial PEI records like this are important. But on The Island, they’re not nearly as important as stopping to chat with an old friend. An old friend who had excellent guidance on the subject of locating a couple of extra dirt roads between Freetown and Margate; an old friend who has more than his fair share of stories from PEI dirt roads in years gone by.

But stories told by iconic Islanders are better.